As you prepare for another big Oscar showing, allow me to brief you on a small yet smoking hot gorgeous television series that now resides in your district of entertainment.

Byron Balasco’s “Kingdom,” a show that debuted on DirecTV back in 2014 and ran for three seasons, now sits on your menu screen for fans to dig into. Quite frankly, I am jealous of the souls who come upon it, seeing the popular picture of Jonathan Tucker, Nick Jonas, and Frank Grillo standing next to each other as a fighting family. I wish I could click play for the first time all over again.

But if that were true, I wouldn’t be here pleading for more hours of this show from you right now. Because “Kingdom” fans need another season. Name the episode amount and we will agree. 3-5? Sure. 6-10? Great. Just give us another round in the cage. Give Balasco a chance to write a proper and fitting ending, even for a show that never aspired to have neatly connected stories that adjourned their seasons. For Balasco, it was always messier yet more fitting to simply drop us into a period of his characters’ lives.

Like going from Tucker’s wild yet gifted and charismatic Jay Kulina being knocked out in a cage to selling real estate with a new girlfriend and daughter in his life. Seeing Kiele Sanchez’s heroic portrayal of a woman experiencing a miscarriage shortly after experiencing one herself in real life. Balasco’s show was raw yet attentive, ferocious yet stuffed with passionate portrayals of people who liked getting punched in the face and heart repeatedly. 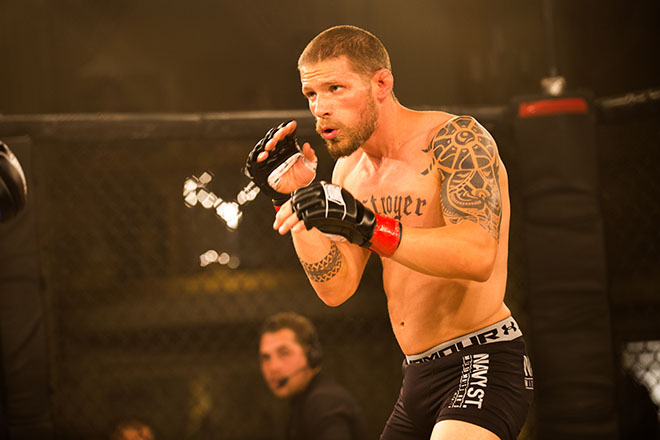 The show needs a fourth season. The negotiations for Seasons 5 and 6 can wait for another day. Right now, though, there are a few things fans must find out:

*Who wins a third fight between Jay and Matt Lauria’s Ryan Wheeler? Splits are not cool, and neither were healthy (physically and mentally) the first two bouts.

*What will Navy Street look like without Sanchez’s Lisa Prince keeping the books and the ship afloat?

*What does the future look like for Grillo’s Alvey, who was last seen bleeding on a jukebox after narrowly winning the Legends match with Matt Hughes. By the way, get Hughes back for a cameo. Talk about a real tough guy. A train couldn’t even take him out.

*When will Mac Brandt’s Mac Sullivan fight again, and how is Shelby (Balasco’s real life wife and essentially everybody’s assistant at Navy Street)?

*What does the future look like for Jay and Alvey, two painfully similar and equally chaotic souls trying to stay somewhat close as father and son. After what transpired in the penultimate episode with Nick Jonas’ Nate Kulina, we need to check this relationship’s temperature.

There’s more unfinished business, Netflix, but you get it by now. The picture is quite clear. We need more Netflix. Yes, me. I am a film critic by trade, but saw very few pieces of work that were more cinematic than “Kingdom” from 2014-17. Don’t forget about Entertainment Weekly’s lovely and very talented Samantha Highfill, who wrote extensively on the show and provided wonderful recaps and commentary that worked as one. Oh by the way, the cast and crew are game for another season. Sam asked them right here.

Talk to the mighty Instagram group, called “Bring Back Kingdom.” When the show debuted on Netflix, the page didn’t exist. Inside a couple months, it is heading towards the 11,000 member mark. Trust me, as someone who has created several show pages, they don’t grow that fast. Even Mark Zuckerberg knows about this damn show now. Due to your actions, this wonderful show has found a real audience and it’s made them family. A group of friends stretched far and wide across the world, from Australia to England to the United States, all devoted to one cause: Everything “Kingdom” and its future.

You rescued the show, but there’s unfinished business. Now, you need to give it another season. We all know you can. DirecTV cares about this show as much as it does words that don’t end in ALL CAPS. The ball is in your court. I know if $100 million can be given to a Will Smith film called “Bright” that very few remember, a show with a growing fan base should get a small chunk of that to make a final season. You get it. Smart, practical business minds like yourselves making Steven Spielberg nervous and upending the movie business can seal a proper ending on “Kingdom” with a single phone call. Like Heath Ledger’s Joker, that’s all I am asking for. A phone call. Greenlight it!

It’s more than just a show. One of the Bring Back Kingdom page members, Rachel Zendt of New Jersey, is the one who gave me the idea about writing this letter. In her words, Balasco’s show “brought together a group of people like no other.” As Rachel puts it, the show has brought people dealing with depression, anxiety, doubt, quarantine-related pressure, or an illness together. People who would otherwise never connect with others without “Kingdom.”

Listen to Tucker himself, who has greeted “the Kingdomites” with glowing regard. In an interview with Collider, the actor talked about the huge support from Netflix subscribers:

I probably get two or three people a day that reach out, who are in a really, really challenging place in their lives or a really dark place, and a few people a week where it’s touch and go, in terms of whether or not they’re gonna stay with us, and it’s easy to reach out and let them know that you hear them and see them. I’ve been very moved by that power and the affect that it has on our fellow man because we’re all in this leaky boat together and we’re all trying to connect.

Tucker goes on to explain the connection between “Kingdom” and its rabid fanbase, even hinting that the collective enthusiasm for the show could be working. “It’s great to just be able to literally tell people where they can find the show. Look, I wouldn’t be surprised if we came back and did like a six episode limited thing, somewhere at sometime,” Tucker said.

There you go, Netflix. Follow Tucker’s lead. Listen to Jay. Do the right thing.