The first thing that comes to mind is the sweat. I was sweating profusely through my forehead, and it wouldn’t stop. Normally, someone would attach fear and nerves to this, but that wasn’t really the case. I was just ready to get this thing going. Rachel and I had been engaged since a Dave Matthews Band concert nearly two and a half years before this night. Getting married requires a healthy amount of cash if you want to do it right, so time had to be mortgaged over a certain period of time.

Finally, the wait was over. February 18th, 2005 was our day for two reasons: there was no Cardinals game that day and I was marrying the love of my life.

I know, it’s not so cool these days to say that your spouse is the love of your life. It’s as if being nice to one another is hard enough these days that an honest love isn’t allowed. When you are married to someone, saying “I love you” can become an arbitrary practice that most men write off as too sappy or vulnerable to admit and women wonder if they really mean it. The thing for me is clear-I really do love my wife. I need her every day, or else I’m screwed. I’m lost with her in this mad world. If you find a good wife, you are that much closer to a good life. I’m a hopeless romantic, a lover of old school ideals, and one of them is the belief that marriage can still produce a happily ever after. Now, back to the sweats.

I was ready to walk out to the spot where I would say I do. I had a few groomsman and Rachel had her bridesmaids. There was a man with a book who conducted the event. Families and friends had gathered in the room to watch the moment that two people make a run for a good life. I couldn’t stop sweating. This was back in the day where J. Crew hair gel and I slept together on a daily basis. I’d put a handful of this stuff into my curly Italian hair, and hope it stayed together. I eventually layered the side of my head with some clippings on top to make the hairdo work. However, so much hair gel was needed. I was either auditioning for a Mad Men spot or the latest revival of Grease. It was terrible, and it broke the faucet in my head where salt water poured out of. 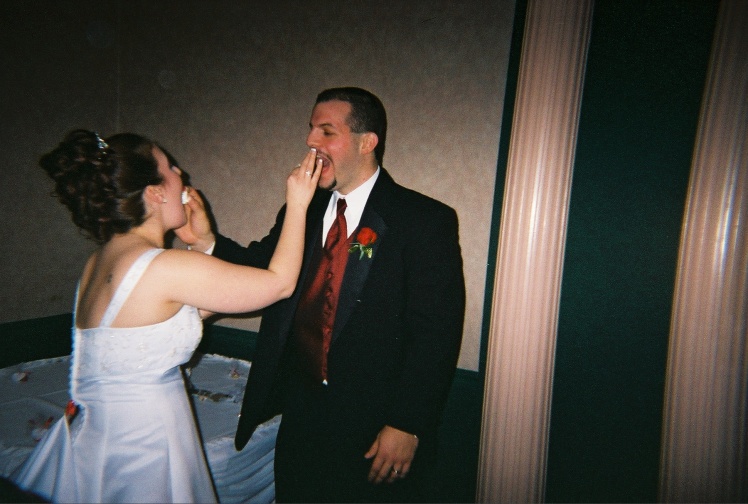 The music started, and we gathered at the spot. Rachel walked down and looked beautiful. She had rose red lipstick on, with her hair up in a knot or some kind, and she had some makeup on the face. I felt like nodding towards my dad to make sure I was really getting to marry this woman. We held hands, said the words(including I be wed instead of I thy wed), and kissed. After walking through the kitchen and into the lobby, Rachel and I re-entered the room as man and wife. It was done. The hard part was over. Now it was time to live, and not just stay together, but stay in love.

We moved from Maplewood to Florissant, and back to Richmond Heights. Apartments were like one year contracts with no guarantee, but we had solid jobs and worked our asses off. Family members kicked in when we needed help. Without them, staying together wouldn’t have as easy. Without a supporting cast, the two stars are hopeless.

In 2009, we bought a house, and two years later our son Vinny was born. Hardships attacked the young kid during the first months of his life, and a wallop came later with the passing of my beloved grandmother, Meme. Life can kick your ass whenever it wants, but it’s how you react that determines the next move. Death happens, tragedy is relative, and bad times cascade throughout a life, but after 12 years later here we are.

How does it sustain? Choice. Rachel and I choose to be together and figure things out together. Since movies and television have told us one person has to be the leader, it’s become custom to define every couple that way. Rachel and I work together and get shit done. That is the only way it stays strong over a decade. Each person has to feel like they are involves and doing the work.

It’s not easy. When we moved to Arkansas in late 2014, our marriage was tested. I went into a homesick induced depression and found a dark place that almost doomed everything. Maybe it was Arkansas suddenly becoming home and wiping my city away, but it may have just been a challenge to figure out how much I wanted to stay married. In the end, I got my shit together, and a result, our marriage has gotten stronger. Back in St. Louis, we are thriving.

After working in mall shop retail and nanny duty, Rachel is the owner and lead manager of a Tile Shop. She’s a badass ninja interior decorator and leader of a staff. After working in a movie theater and various warehouses, I am a radio host and lead sports and entertainment writer for KSDK News. It’s really simple. If you work at something, it stays intact.

From kissing in the rain outside Hatch Hall in Columbia, Missouri to getting engaged at a DMB concert to getting married at Orlando Gardens to having our son, life has thrown us plenty of curveballs, but we’ve fouled all of them off and even hit a few doubles.

Happily ever after still exists. Don’t let anyone tell you different.

One thought on “Happily Married 12 years later: A true story”