The first warning sign for a movie can be found in the screenplay credits. If you see four different names for a small independent film like The Comedian, something is very wrong, and you should abort the mission to pay 12 dollars to see it. The new Robert De Niro film, directed by Taylor Hackford, is a misguided adventure that loses its edge and overall effectiveness in a lazy second half.

De Niro is Jackie Burke, an aging lion trying to stay afloat in the competitive land of stand up comics. Best known for an annoying fan favorite television series, Burke is desperate and takes jobs in cheap bars and clubs to keep his name from the dust. He often can’t control his temper, and gets into fights during shows, which requires him to borrow money from his brother(Danny DeVito). When he meets Leslie Mann’s rebellious yet kind hearted Harmony, Jackie sees an opportunity to make himself better, or possibly, just have a good time. 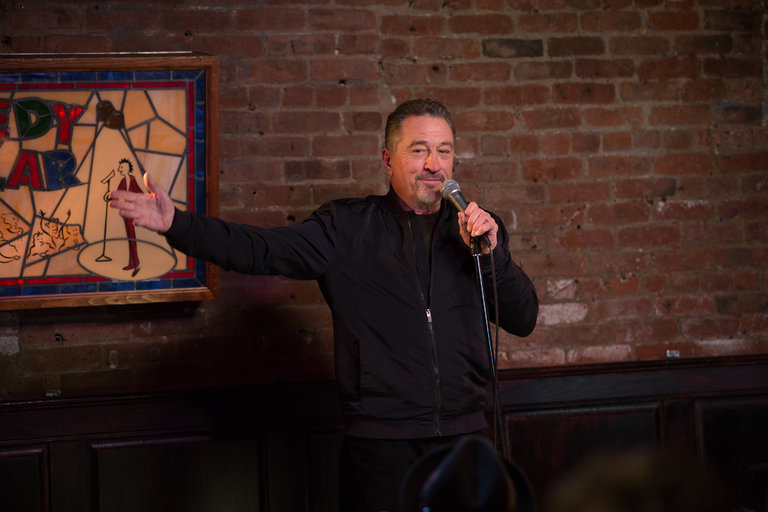 The Comedian is at its best when it’s painting a picture of the underground comedy scene, and using real laugh artists like Jim Norton and Brett Butler. There’s something unique about getting up on a stage, and getting complete strangers to laugh at your jokes. This film, in parts, shows that bare bone struggle to make a name for yourself in a digital world that is run by clicks and not skill.

Burke is an insult comic, and the role provides De Niro with a chance to plug into his strengths as a performer. He’s one of the best, and that’s because he can mix comedy and drama with sadness without losing a beat. He makes you root for, despise, and love Jackie at once, and that’s not easy to do. This guy wants to make a buck, breaks down anybody in his way, and doesn’t care about it as long as the check clears. If you mention the TV show, he loses his mind, because it represented his biggest commercial hit yet also his weakest creative effort. He’s a wolf who wears sheep’s clothing, because it pays the most.

In Harmony, he sees escape and fun, but for the audience it’s a predictable tiresome romantic subplot. The film loses its way in the second half, because the comedy driven pursuit of fame is shoved to the side and the Harmony quest is put front and center. When something happens, we can tell what’s next. It’s like screenwriters Art Linson, Jeffrey Ross, Richard LaGravenese, and Lewis Friedman passed the laptop around when they tried to finish this script. There simply isn’t enough material for a film like this to work. If it was smart, the simplistic approach of “the old lion chasing one last laugh” would have sufficed. Once they went for the romance, The Comedian lost its teeth.

The cast is good, but largely wasted. Edie Falco came out of television show hiding to play De Niro’s agent, and Billy Crystal, Cloris Leachman, and Charles Grodin all have amusing cameos. De Niro and Harvey Keitel spar on film for the ninth time, and that’s cool. The film made me laugh in parts, roll my eyes in others, and largely leave wondering what could have been if one screenwriter got his vision realized instead of four different sets of hands making the cinematic silverware dirty.

The Comedian isn’t a bad film, but its inability to find an identity and stick to its roots doesn’t make it movie theater worthy.