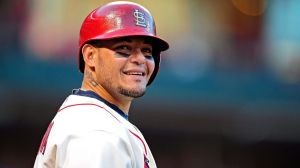 Disclaimer-I wrote this last August for the Conclave but saved it on the dose here for a future publishing. I saved it for when people started to doubt Molina’s brilliance. They were worried about his lack of power or his ability to frame a pitch. Well, when you are king of a position in America’s favorite pastime, all people can do is chip away at your legend. I wrote this when Molina returned in 2014. Read on.

When I think of Yadier Molina’s importance to the St. Louis Cardinals, I think of one of my legs. He isn’t the heart and soul of the team because that position belongs to the logo on the front of the chest and is spread across the entire team. Yadi is a leg and it was broken on July 9th when he went down with torn ligaments in his right thumb. The loss of Yadi didn’t dismantle the team completely. They were able to soldier on and win more games than they lost. Tony Cruz couldn’t fill the starting role so A.J. Pierzynski was brought in to help. Together, they did a decent job in a pinch. In the end, they showed how important Yadi is to the Cards. He is easily the most valuable player and someone I attribute “true value” to every time he steps on the field. He is a leg on this team because since early July, this team has been hopping on one foot and barely getting by. They are scrapping the floor and the other healthy limb is getting tired. With Yadi, the team walks straight and glides. Without him, they are off, in pain and slowly falling apart.

You can try to calculate the value of Yadi but good luck getting anywhere with MVP voters. They prefer glossy baseball card mafia statistics instead of intangibles. They want home runs, RBI and hits. MVP voters like the long ball and Yadier’s career high is 22 in 2012. The WAR(wins above replacement) can’t be correctly graded for a catcher, but last year in that category, Yadi ranked first among catchers with a 5.7. In 2012, it was 6.7 wins above replacement. Yadier Molina should have at least 2 MVP’s but voters don’t want to look at the little things.

Let me run down the little things Yadi does.

*He has two brothers in his life but that is only by blood. He treats his pitching staff(every one of them) like brothers in arms. When they are on the field together, madness could be unfolding but Yadier will NEVER throw his pitcher under the bus. He protects them, guides them and nurtures them like they are his own kids through starts.

*Those piercing eyes through his catcher’s mask are directed at the other team. Whether it be a hitter standing at home plate or a baserunner or first or second. Yadier is always watching the events happening on the field. He has picked off more baserunners than any catcher in recent memory because he knows what is happening before the runner on first does. Yadier is a baseball field what Marshall Faulk used to be to a football field. A computer sitting in the middle of the field. He always has his eyes open.

*Yadier changes another team’s game plan. With him behind home plate, they can’t run or barely take a lead off first base. Molina is Wyatt Earp out there. Cross him on the bases and an inning may be over. He has a quick release and an accurate arm.

*He barely strikes out. He grinds out at bats like Matt Carpenter does. He loves hitting with a 0-2 count so the pitcher thinks he has Yadi where he wants him. Molina’s finest achievement in his career has nothing to do with catching at all. It’s turning himself into one of the best hitters in the game. He hit .216 in 2006 and now regularly hits near .300. His lifetime batting average is .284 and considering where it started, that is impressive.

As Dave Duncan said on the Turn on 101.1 ESPN this afternoon, Molina can’t make a pitcher better but he does the little things behind the plate that help out a lot. He can pull pitches back in towards the strike zone instead of letting them run out, so his pitcher gets close calls. He makes the pitcher relax and throw, taking away the complication of overthinking on the mound. With Cruz or A.J. back there, a pitcher may call more of his pitches but with Yadi back there, they breathe, look in for the sign and fire. It’s just easier. Little things are what Yadi provide. His regular stats are pretty good but his unwritten effect on every game is hard to put into words.

When Yadier Molina went down, the forecast for the rest of the season was dark. The Cards were expected to drop off. The team was 50-42 after July 9th. Today, they are 71-61. A record of 21-19 without Yadi is called holding the fort ladies and gents. Now, he is back and the team has two legs to stand on for the final four weeks of the season. Molina didn’t come back early either. Torn thumb ligaments usually take around 6-8 weeks and not 8-12 like the team prescribed. Molina collected four hits on Wednesday and Thursday. It came against Double A competition but it at least shows his bat speed isn’t diminished. I wouldn’t expect him to bang the ball around the ballpark or throw out runners with ease just yet. His presence on the field will help this team immensely.

Molina hits 6th in tonight’s starting lineup and his task becomes tall when Justin Masterson takes the mound tomorrow. A struggling pitcher like Mast needs a catcher like Molina. Yadi is a target back there but he is also, as pointed out earlier, a calming presence and someone pitchers trust. While I don’t think Molina will heal any pitcher individually, the staff ERA will start to go down with Molina behind the plate. That’s his effect on the game. That is true value.

Yadi, it’s good to have you back.