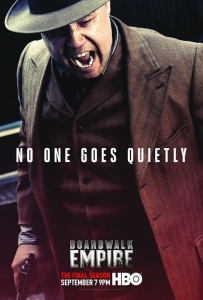 Being Nucky Thompson, the king of Atlantic City, one can’t afford to stay out of danger for too long. It seems like every season the one time city treasurer and unofficial gangster is dealing with a big fish washing onto the Eastern shore to take a piece of his pie. Near the end of the season, he manages to escape. All this time, the authorities have never been able to touch him. Enemies come and go. Women are able to temporarily thaw his cold heart but eventually it hardens back up. In the fifth and final season of HBO’s Boardwalk Empire, Steve Buscemi’s Nucky will face the realization that all good things eventually come to an end.

People cried outrage when HBO announced it is closing the doors on the expensive, elaborate and wonderfully shot drama this past winter. The show got better and better with every season, and the chances for more story growth and character development were there. However, when your seasons cost 100 million dollars to shoot and Creator Terence Winter is using real history with these famous figures, an end was always in sight in my eyes. Nucky doesn’t rule forever. Stephen Graham’s expertly crafted Al Capone doesn’t stay small time for long. Vincent Piazzo’s Lucky Luciano eventually becomes a boss. If you are familar with your ghosts of gangster’s past, HBO’s Emmy winning series was always booked with a ticking bomb attached to it.

I am only disappointed that the new season, starting Sunday, has only 9 episodes. That’s a little tight to stuff so many moving parts into. The show doesn’t just focus on one character. It’s the best ensemble of actors put together on television. Buscemi, Graham, The Wire’s Michael Kenneth Williams, Shea Wingham, Michael Stuhlbarg(Arnold Rothstein), Michael Shannon, Kelly McDonald, Jeffrey Wright, and Gretchen Mol. One can’t forget the memorable work put in by Bobby Cannavale and Ron Livingston. Jack Huston created one of the most noble knights in Jack Harrow before his demise last season. Winter choosing to fire up 9 episodes seems like an HBO move to quickly dispatch of such a rich show. I am okay with the departure but not so proud of the method. This is one of the network’s strongest shows since The Sopranos went off the air. One can only hope some class is shown in the final hour.

Why should you watch this show or care to catch up? The acting is better than anything you will see on television. It’s not flashy like Breaking Bad. More subtle like Mad Men. The sets are gorgeous. They built the entire boardwalk that the characters walk on during the show. The action is sudden and brutal and not overdone. The stories are full and filled in with color instead of bland white strokes. The people existed in real life but are given an extra shade of grey. One can walk into season 5 ready to rock n’ roll but I suggest going back and savoring the flavors of past seasons. Boardwalk Empire may not be explosive at every turn but it’s full of depth that other shows simply lack.