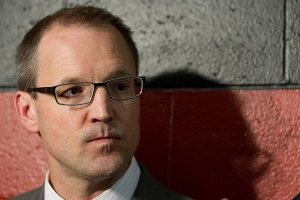 Now that the latest playoff exit for the St. Louis Blues has sunk into the heartbroken minds of fans across the Lou, it’s time to look at some options this summer to improve the team. Some of them may be minor and some of them could be major. As I talked about last week, it’s time to depart the T.J. Oshie train, but it’s important to not stop there. There can be player moves and line transfers that could turn this team into a weapon not only this October but hopefully next spring as well. As the late comedian George Carlin once said, stop living in the past because it doesn’t care about your future. Let’s talk remedies.

With no offense to Ken Hitchcock and his Stanley Cup success, he isn’t the man for this team’s future. The days of year to year contracts with a veteran coach who hasn’t tasted playoff success in quite some time must come to an end. Bring in a new coach and sign him for 3-4 seasons. Produce some stability instead of a substitute teacher behind the bench. While Mike Babcock can be enticing, I don’t see him leaving Detroit and the same goes for the old wolf, Darryl Sutter in Los Angeles. For my peace of mind, I’d like the gritty ex-player and ferocious Dan Bylsma. He coached the Pittsburgh Penguins to a Stanley Cup championship before they fired him last June and has spent the past year on the NHL Network and helping a friend on a WHL team. Bylsma wants to return to an NHL bench and could be the right guy for the Blues. He isn’t burned out after a year off, and has a chip on his shoulder after being canned in Pittsburgh so quickly. Bylsma is a player friendly coach who doesn’t just understand the game from a coaching level but can level with it from a young player due to his experience in the league. He has worked with superstars in Sidney Crosby and connected with younger grittier player in the minors. He is a fresh face in a Blues locker room needing a major face lift of any kind. If Doug Armstrong is not only practical but tactical, he calls Dan up and offers him the job. Start fresh and get serious. Bylsma has been to the promised land and knows what it takes, and will add a little intensity to the bench.

I don’t care what happens in training camp or the preseason. Stastny was brought in to change things on this team and doesn’t deserve third line minutes. If it’s pairing him with Vladimir Tarasenko and Jaden Schwartz or Alex Steen and David Backes, make it happen. Bring up Ty Rattie or Robby Fabbri to contend for a lower line spot and let Stastny collect first line minutes. He didn’t light up any scoreboards with his first season numbers, but started off slow, got hurt and never gained access to the top line. If the Blues want to rebuild their offensive attack to get smarter on the ice, Stastny needs to play more minutes. Done. This is easy.

It’s a popular notion but you simply aren’t going to find uniquely gifted power center/winger types like Backes in the NHL. He didn’t show up in the playoffs again, but maybe he was playing on the wrong line. Backes is a guy who can score 25-30 goals a season and be a menace to society out there but probably doesn’t need to be on the first line. He is a captain and one his teammates treat like a war general, but maybe reducing his minutes and retaining his presence is the right way. You don’t clean out every original core player, because you would get rid of 60 goals and lots of veteran leadership. While Oshie is expendable, Backes is valuable to a team that may get a lot younger in 2015-16. Don’t trade him. Keep him. Trust me. You will need him this season and it won’t be as easy to replace him.

4.) Get Rid of Patrik Berglund

Please. Somehow eliminate the worst contract and stop paying a third liner 3.7 million dollars. Give Dmitri Jaskin his spot and call up a cheaper talent like Adam Cracknell or hungry linemate. I know Berglund came on strong a bit near the end of the season, but he is a waste of space out there. I don’t see the defensive effort that many point to and think he is a liability most times in the offensive zone. I have never seen a guy get manhandled by smaller men and stripped of the puck more often than Bergie, a Swede who refuses to use his massive size. If he played like Backes, this would be a different story. If a team would like him and Oshie, don’t hesitate. Berglund is replaceable.

5.) Figure Out Your Goaltending Situation

Things didn’t get weird last season but they got rocky. Brian Elliott started the season as the #1 and then got hurt. Jake Allen started off rough and then started the final playoff game for the team due to a white couple months of play. Martin Brodeur played his last bit of hockey somewhere in between. Figure this out. If Elliott wants to stay and honor his contract, that’s great. Just because Allen didn’t finish well last month doesn’t mean he is handing back the starting spot to the older Elliott. That’s not the way. If Elliott is happy to come and fight for it, bring them both in. If not, find a way to trade Elliott, make him happy and give Allen the keys. In my opinion. Allen is the future of this team and needs to be handled right. At the same time, Elliott shouldn’t be lied to. The Blues have worked off a tandem in net for years. Is that the plan moving forward? If not, what is the plan?

Bonus Remedy-Find and sign a gritty playoff experienced veteran. I mean, recent playoff experience. Not Jamie Langenbrunner. I would love to lure the nearly 40 year old Martin St. Louis a juicy one year deal but he won’t leave New York and I don’t think the Rangers will let him. I have a liking for the Capitals rough house clutch scorer Joel Ward but he may have locked himself up an extension with his Game 1 winner last week over the Rangers. How about a guy like the Kings’ right winger Justin Williams? He made 3.65 million last season, is for hire and contributed 19 goals and 23 assists this past season and is known as Mr. Game 7 around the league because of his playoff success. The Jets’ Michael Frolik is also an unrestricted free agent this summer. Finding a 2nd or 3rd line guy if you do get rid of Oshie and Berglund and don’t want to promote from within right away. A scorer or playoff stud could be a helpful kick this Blues team needs come crunch time.

This is the first batch of remedies and offseason changes and ideas. It’ll be a long summer of constant grief and sorrow for the heartbreak crew at Scottrade, so keep coming back here for fresh doses from this blunt free spoken Italian correspondent.

Drop your feedback in the comments below please. I will respond.