Ten years ago this very minute, I married my wife, Rachel. February 18th, 2005. I had hair, a few different friends and got married at a small venue in St. Louis called Orlando Gardens. Friends and family were there from both sides. I watched my dad bring down the house with his dance moves and even got my mom on the dance floor. My friends smiled and danced. It was a different time because back then, times were tough, responsibilities were limited and the future was so distant. There was no Vinny. There was no need to determine the course. There was just Rachel and I, eating Dominos Pizza near midnight in a crummy apartment off Laclede Station Road. All we had was love.

I’ll admit I was nervous as shit that night. When you get married at 23, nerves are hanging around you no matter what. It’s part of the deal. You are giving away a piece of your life and taking a piece of someone else’s life. Marriage involves sacrifice because your lives do begin to change. For the first time in your life, you put someone else ahead of yourself. Dating is nice. Getting engaged is sweet. Getting married is the final step. Get in or get out. I got in and I was nervous. By the end of the night I had little doubt. There I was eating cheap pizza watching a 27 inch television in my tux with my wife(slowly peeling the makeup off her face with each slice of pizza). It’s real when you wake up the next day and see the ring on your hand, at least for a guy it is. So many couples get engaged and decide to NOT go through with it or worse, decide to do it just because it’s what others expect or think they should do.

A little bit of advice for the single folks or harmlessly dating peeps. Think hard before you get married. Do it for the right reasons. It’s not an easy endeavor. Take it from a guy who has been down the rabbit hole these past few months. I questioned every single thing in my life when my family moved to Arkansas. Change can make anyone step back and either contemplate their current train of thought or it can make them panic. I freaked out and nearly lost everything in December. I pulled that trigger. It took me weeks to realize that I almost made a crucial mistake. As the anniversary floats around today, I have no regrets. I am happy. I found my footing. As my sister in law pointed out, “It’s fight or flight. You stayed and fought.” I will tell you it wasn’t easy.

I believe in love to this day. I choose to believe in something many find humorous, distant, hard to catch or impossible to understand. My dad doesn’t truly believe in love, at least the kind that I do. To each his or her own. I believe in it. It’s not an ideal stretch. Believing in hate and anger is a lot easier because they are all over the world and right next to us so frequently. Turn on the news and you see hate. Look left or right and you see anger. Love isn’t so easy to catch. I like to think I am in my marriage because of love and not circumstance or safety. You only live once and getting married for anything other than being mad in love with that person is futile work. Buying into something for the money will leave you hollow and unfulfilled down the road. Getting hitched because someone else told you to is locking your heart away never to be found again. Making a decision on your own to hand over your heart to someone else and staying in it ten years later when times get tough is the only way to survive. I don’t believe you can survive in this world or live a fulfilled life without finding a person you truly love.

I am in love with my wife. There were times where the future was in doubt, but instead of running, I stayed put and dug my feet in instead of running. She is still the best move I made and while that can become foggy and unclear at times, it can’t be forgotten. If you choose to love in this world, it shouldn’t be easily broken. Once a bond is forged, breaking it should take a lot of work, thought and assurance that the future is better off without them. While it’s sometimes impossible, a husband should seriously separate the fact that kids are in the picture and measure his desire for his wife as a singular need. Vinny is a huge part of our life, but if I don’t love my wife as much as I did 10 years ago, something will not be right.

These past few weeks, I slowly started to realize that she is still the love of my life. It’s not bullshit. Don’t take love for granted because it will easily escape if you let it.

Think of it this way. When you love someone, you invite the idea of love into your life. Let’s call it a house. Some people think that love will stay in the house no matter what happens. Since it walked in once, it can’t leave. That’s wrong. If you don’t work on it, preserve it and make an effort, love will run out the fucking door at first notice. Trust me. You have to put the work in.

Ten years later, I have no regrets. I didn’t come to that conclusion through God, advice or a written method of survival. I chose to stay. While it’s impossible to predict the future, I am happy where I am right now. Are you happy? 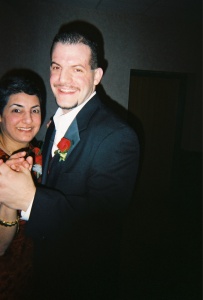 4 Replies to “The Idea of Love/Marriage 10 Years Later”