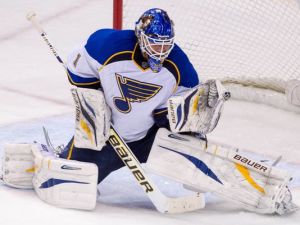 Brian Elliott has waited his turn to be the main man in net for the St. Louis Blues. By circumstance, injury or natural default, Elliott hasn’t enjoyed a smooth ride to the #1 position for the Blues but that only makes the perch sweeter for the 29 year old  Canadian native of Newmarket, Ontario. The 291st pick in the 2003 draft came to the Blues after a terrible 2010-11 season split between the Ottawa Senators(whom he guided in 2009-10) and the Colorado Avalanche but found steady success in St. Louis rather quickly.

As the backup to fellow newcomer and big offseason trade recipient Jaro Halak, Elliott quickly established himself as an above average netminder in the 2011-12 season for the Blues. He posted a 23-10-4 record with 9 shutouts, a 1.56 GAA(goals against average) and a .940 save percentage. Elliott didn’t find a starting job, but he definitely found a home. Together with Halak, the Blues had the best goaltending combo and it proved to be vital in the postseason. In the playoffs, Elliott got the chance to show his true worth when Halak went down with a knee injury against the San Jose Sharks in the first round of the playoffs. Elliott stopped 17 shots in that game and helping the team win the series before the Blues were swept by the Kings. Overall, Elliott’s .909 save percentage and 2.34 GAA were solid in helping the team advance into the second round after Halak went down. The Kings proved to be too much and Jonathan Quick dominated the series.

The following season(shortened by the lockout), Elliott played in 24 games, posting a 14-8-1 record with 3 shutouts, 2.28 GAA and .909 save percentage. This was a difficult season and one that saw the arrival of Jake Allen to the fold. Halak went down with an injury in January, and Elliott was tasked to start again. After posting a 3-2 record and producing 4 quality starts in net, Elliott endured a terrible patch of games. From February 5th to the 11th(spanning 4 games), Elliott allowed 23 goals on 113 shots(.790 save percentage). He ended up the minors and Allen took over in net and played well. When Elliott came back, he was rocked for 4 goals against Dallas but clamped down after that game. From March 5th to April 27th, Elliott went 11-2 to help the Blues lock down a playoff spot. Allen was sent out and when Halak came back, he couldn’t budge Elliott from net.

This is where fans seem to forget something. Against Quick and the Kings that spring, the Blues blew a 2-0 lead but that shouldn’t fall on Elliott’s shoulders. He posted a 1.90 GAA and a .919 save percentage against the Kings. When the Blues fell, they did so as a team. Quick was unstoppable at the other end and denied the Blues any chance of running away with the series. The Kings took Quick’s work and overpowered the Blues attack. Elliott had one bad game out of the six, allowing 4 goals on 29 shots in Game 4. He played well yet fans don’t give him much credit because the franchise’s playoff choke history continued.

The 2013-14 produced another three goalie season, and this time Elliott was shoved out come playoff time. The Blues traded Jaro Halak to the Sabres for veteran Ryan Miller to answer their prayers. Elliott never spoke up or fumed to the media about playing time when this ordeal went down. Elliott ended the season with another stellar stat line. 18-6-2, 4 shutouts, 1.96 GAA, and a .922 save percentage. He didn’t start a single playoff game as the Blackhawks shrugged off a 2-0 gap to the Note and went on to win 4 straight in the first round, with Corey Crawford outplaying Miller during the series in crucial moments. It turns out the Blues already had their guy in net.

The way that Elliott handled himself spoke volumes this past summer when General Manager Doug Armstrong had to decide who was in net in the 2014-15 season for the Blues. The Blues wasted little time and signed Elliott to a 3 year, 7 million dollar contract on May 19th before Ryan Miller went anywhere. Allen was assigned the backup spot after a stellar season with the Chicago Wolves. The team traded for Carl Gunnarsson and acquired Paul Stastny and Jori Lehtera(a player they originally drafted in 2008) on the open market, improving their overall depth. The stage was finally set for Elliott to take over the top spot.

After a modest October, Elliott was stellar in November, posting a 5-2 record, including a 39 save win over the Rangers and a win over the Capitals. He was hurt on November 25th against the Senators, leaving the game after stopping all 16 shots. When he returned on December 30th, he lost to Nashville but made 44 saves against the conference leader. Elliott quickly settled in. In the New Year, Elliott is 10-2-1, and proved his worth in a three game stretch in late January and early February. He made 33,33 and 30 saves in wins over the Predators, Capitals and Lightning in helping the Blues polish off a great streak. He stumbled against Columbus and Chicago but has won his past two starts against Tampa Bay and Florida, stopping 40 shots on Sunday in a shootout victory where he outplayed Roberto Luongo.

After years of fighting goaltenders, Elliott is the main guy here and will be next season as well. Jake Allen didn’t fare well in Elliott’s absence and isn’t ready to take on the rigors of a starting goaltender. He is young and needs time. Elliott gives him that time. You see, two goalies were brought in to be the starter in Halak and Miller, and Elliott waited his turn. When he took advantage of opportunities and outplayed the proposed starter, he won the job.

I couldn’t think of a better story on this team than Elliott. He got here. He waited. He played very well, ranking 2nd in the league in GAA and 11th in save percentage and shutouts in 2013-14 amid the goaltender change in front of him. Elliott just kept playing. This past summer, he was awarded for it and his 2014-15 overall stats rank among the best in the league. 18-7-2 with 3 shutouts, 2.10 GAA and a strong .925 save percentage. When the team didn’t play their best against Tampa Bay at home or couldn’t finish well Sunday night in Florida, Elliott saved them and guaranteed points. He’s evolved into a top end starter and earned the spot. With 26 games to play and the team chasing Nashville for the top spot in the Western Conference, Elliott is primed and ready for the fight.

The Blues may need a piece or two to solve their playoff chase depth riddle but the one thing they don’t have to worry about this year or the next is the goaltending situation. Elliott(along with an improved Allen behind him) has that covered.