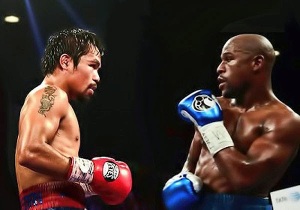 Get ready to rumble, boxing fans!

Finally, after years of delays and close calls, Floyd Mayweather Jr. and Manny Pacquiao will step into a boxing ring together on May 2nd with the intent to beat each other up. After politics, egos and attitudes prevented the clash of the century, the two fighters got old school and agreed to terms Thursday evening. First reported by Yahoo Sports, the expected split of the revenue earnings will tilt in Floyd’s way, 60-40. That means Manny only takes home 80 million, which isn’t bad for a night’s work of bashing inside a square ring.

The fight comes at a time where the sport is in need of some broad spectacle. MMA and UFC are becoming increasing popular with the short attention span crowd or the other fair portion of entertainment fans who don’t care to watch two guys tap each other for 12 rounds. If you look close enough, there are still brawls in the world of boxing(see that Terrence Crawford and Yuriorkis Gamboa clash of undefeated fighters), but for the most part the sport as a whole is fading away. An entertaining bout between Mayweather Jr. and Pacquiao can bring it back. The fight will break several records for Pay Per View buys, gate ticketing and also a purse that will exceed 200 million without breaking a sweat.

I want the fight, but will admit hope was almost lost. In 2009, Floyd demanded extreme drug testing and Pacman balked. There were other attempts, but if Floyd wasn’t serving time in jail Manny was declining the fight because the purse was less in his direction. Bob Arum, Pacquiao’s promoter, has a rough history with Floyd and Mayweather Jr. took his talents to Showtime a couple years back, which created a hurdle. In November, traction was created when after Pacquiao dispatched Chris Algieri and Mayweather Jr. easily won a rematch with Marcos Maidana. Without a fighter standing in front of them(at least one they haven’t already seen), the time was now to make the fight. Each fighter is heading up in their 30’s and boxing isn’t kind of the human body as gray hairs increase.

Being a Pacquiao fan, I will admit that Floyd is the best out there and that he deserves the higher purse. It’s his throne to lose but that doesn’t mean Manny will be a pushover. He has won his last three fights against Timothy Bradley(who robbed Pacquiao of a decision in their first fight), Brandon Rios and Algieri. Pac presents the relentless speed/power challenge that Floyd won’t have an easy time dealing with. Pacquiao is a southpaw and can fire punches at any angle, which makes his path to Floyd unpredictable and hard to time or track. However, Mayweather Jr. is the master of the counter punch, and that is something Pac struggles with. He was hit with a thunderous counter right hand from Juan Manuel Marquez in their last fight, a punch that knocked him out cold. Floyd has the best defense and the quickest hands. The odds in Vegas will be on Floyd, but people saying it will be an easy layup win for the undefeated pound for pound champ need to reset their clock and think straight.

This fight will be explosive and hopefully one that Floyd chooses to stand in and trade with as Manny runs down around the ring. May 2nd can’t get here soon enough. The ink isn’t even dry on the contract and Pacquiao’s defiant trainer Freddie Roach is already calling a knockout prediction for his fighter, a tactic that hasn’t worked in Manny’s last seven fights.

Here’s my sole prediction. A good old fashioned boxing fight between two sure fire Hall of Fame boxers. That’s all a boxing fan can ask for here.