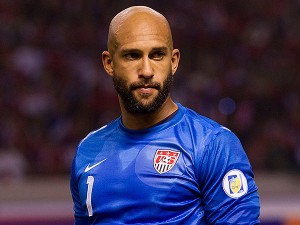 Tim Howard and I are both bald and bearded men. That’s basically where the comparisons end.

It’s easy to like, admire and appreciate Tim Howard. Trust me, I have little clue how the many rules of soccer work and the way leagues operate. I watch the game with the simple idea of hoping for some kind of miracle and a respect for the pace of the sport. However, liking Howard is easy to do because of his position, his status and his performance in the 2014 FIFA World Cup.

For the most casual soccer fan, Howard is the goalie who made 16 stops in a World Cup game(most in 50 years) on Tuesday that should have been enough to fuel a USA win over the Belgium(aka The Jean Claude Van Damme’s) and advance the Americans to the next round. The diehard soccer fans love him. The non soccer fans love him. Everybody in the world likes Howard, including the opponents he has faced. Howard breaks those barriers of devotion and fleeting senses of care because his position is easy to understand and easy to admire.

Tim Howard is a goal keeper, which is one of the easiest to comprehend if toughest to play positions in soccer. The man has to cover a net that stretches incredibly wide and he must use every piece of his body to stop the shot. He is outnumbered most of the time and if he allows a goal, guess what, that could be the deciding goal in a game(look at the Germany win). Howard can only do so much but as a goalie, and if he fails he isn’t letting down a team. He is letting down a nation. The man lives and breathes pressure.

When Tim Howard gets a cup of coffee at Starbucks, he will get nods, hat tips and probably the cup of joe for free.

When he goes to a car wash, strangers will offer to scrub his vehicle.

T-shirts will be made with his bald dome and bearded face hulking across the fabric. Babies will wear Howard onesies and suck on pacifiers that say “Believe in Howard”.

When he is at the gym and blocks a basketball from hitting a child playing next to the court, the parents will beg him to sign it. 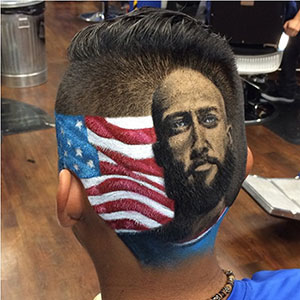 People won’t be able to remember a single American soccer player’s name off this team(sorry Julian Green, who scored the last goal and is 19 frigging years old) but they will know Howard’s full story. He started his career stateside in 2003 before signing with the Manchester United in 2007 and eventually playing for Everton. He played with a team called the Wanderers. He is from North Brunswick, New Jersey and his net worth is 6 million dollars.

People will identify themselves with Howard the way kids try to act like their favorite athletes. Forget you Michael Jordan. This kid wants to be like Howard and leap 10 feet to his right and block a shot and somersault up to grab the ball and launch a majestic clearing kick halfway down the field. Howard has made soccer cool for a lot of people who previously thought of the sport as a lullaby.

Women will adore Howard and tell their men to shave their heads. Like now.

It doesn’t hurt that Howard is bald, bearded, tattooed and menacing looking on the field. It just helps the T-Shirt sales. For every fan who doesn’t like Ronaldo’s pretty boy haircut, they can point to Howard for another style of sports fueled manliness.

Men will stop him and tell him where they were when he jumped high and deflected that shot over the net and seemed to carry a team of misfit toys and a country on his back for 2 weeks.  He will smile, listen and wait for the next interruption to his simple walk down the street.

You know what? All this attention is deserved. Howard has been playing this game for a long time. He was good in 2010 but this year he stepped his game up a few notches. He nearly aided the team in taking down Germany and did the same against Belgium. If it wasn’t for a magical pass from Cristian Ronaldo with seconds left, maybe the USA would still be playing with a better placing and matchup. Howard made that happen. He is a 35 year old soccer player in the twilight of his career who produced a legendary performance on Tuesday that will convert millions of fans and turn little kids into soccer goalies. Thank him for that. With the sport slowly uncoiling in the states, people need a face to connect with this sport. A tough looking stopper who can stand on his head in a great game on a national level and make am impact. Tim Howard deserves every bit of attention he will get.

When the Secretary of Defense calls Howard, it may not be for ways to stop enemy missiles but it will be to congratulate the player. When he goes on Letterman and Fallon, he will get standing ovations. When 2018 rolls around and his face goes up on the screen, people will holler and scream and raise their drinks. The USA may have lost but Tim Howard made sure the country won something. A newfound love and respect for the game. 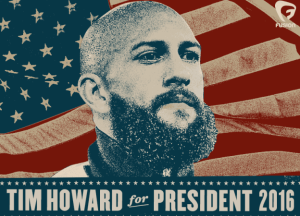 No, Tim Howard won’t be elected President of the United States in 2016. He is too young and doesn’t want to sit in an office. Howard will return to his team and keep stopping soccer balls. He will coach younger players on how to be great. He will ride this current wave of fame into many television appearances and acclaim from all ends of the world.

For a casual soccer fan like myself and one that  jumps on the USA bandwagon every four years, I can appreciate, admire and get behind that story. It’s an easy one to love and digest.