Henry Cavill is a good dude, and handles news shifts like a pro. Ask any director, and they’ll tell you he is a “soldier” on a set. He does the job, is courteous to the crew, and doesn’t make any drama off of the stage–something Ezra Miller could study for days.

We are reminded of how good a person Cavill is when he handles disturbing news, especially to him, about Warner Brothers’ plans for the DC Comic Universe. A universe that is currently in the hands of filmmaker James Gunn and producer Peter Safran. Over the past few weeks, they have taken fire for rumors (mostly false, some true) about their plans for the next phase of DCEU (DC Extended Universe). First, it was rejecting Patty Jenkins’ treatment for a proposed “Wonder Woman 3.” Next, plans for a sequel to “Black Adam” were scrapped, following the film’s underperformance at the box office most likely.

But then the studio landed an elbow drop, announcing in a matter of words that were nowhere near direct that perhaps Superman would be getting a recast. Now, remember that after “Black Adam” opened back in October, with Dwayne “The Rock” Johnson teasing a big surprise in the post-credits. The surprise was Cavill returning as Superman after a disastrous last outing in Zack Snyder/Joss Whedon’s “Justice League.”

Cavill confirmed it on his Instagram account, sending fans into a frenzy. Superman versus Black Adam, and then maybe facing off against Zachary Levi’s Shazam! Great, right? Too bad it’s not happening. Cavill was told by WB to make that announcement mere weeks before they would announce the hiring of Gunn and Safran to take over their DC Studios. The duo came in with obviously different plans than the regime before them, which put Cavill’s alien hero on hold.

Shortly later, as in this week, the news was official: Cavill is out. 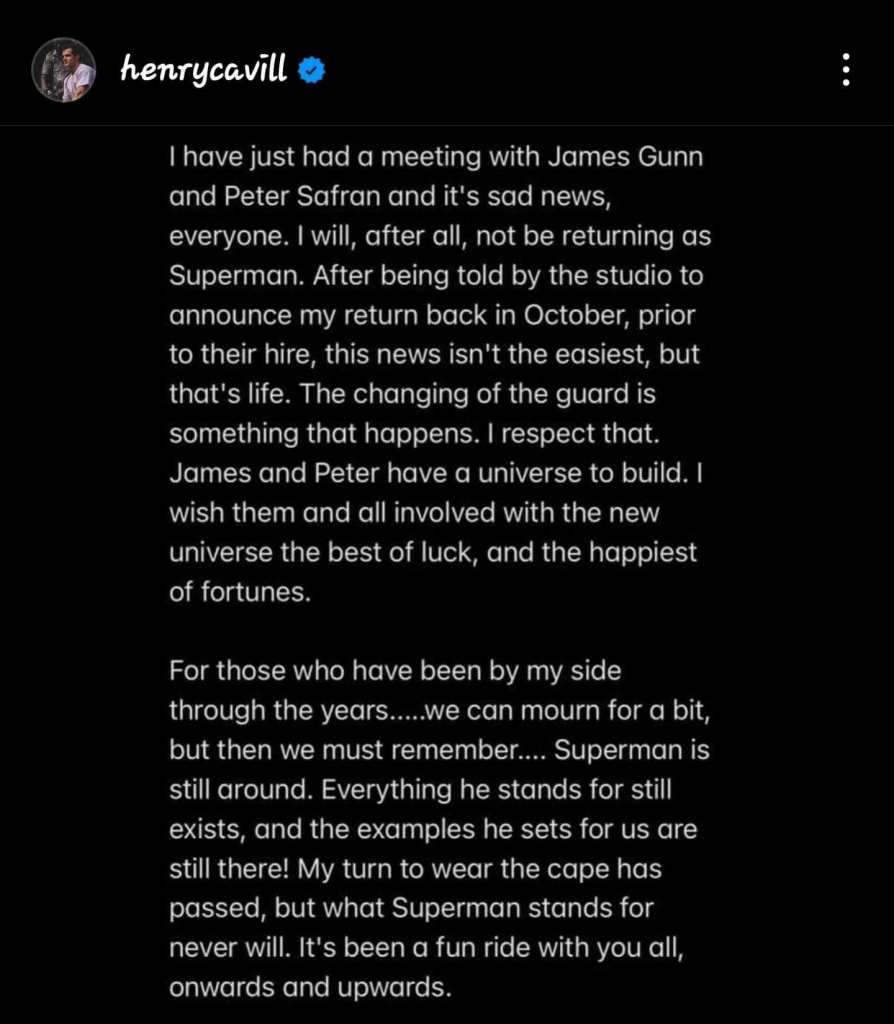 Cavill is a prince. Truly. He could have fired back so much more, and even snuck in some finely tuned snark as well. But he took the champ’s route, and is keeping his eyes forward. According to Gunn’s tweet yesterday, they did discuss other characters with Cavill possibly playing a part. Clarification: He’s not playing Sup, but he may play another DC comic character on the big screen. That shouldn’t be hard with Cavill’s range.

Here’s the thing. I would have loved to see Cavill return and right a wrong with another movie (or two) as Superman. But it gets complicated when there was little chance “Man of Steel’s” original director, Snyder, would not be asked back. It gets harder when you try to conceive a story of Cavill with regards to which current (and semi-current) characters could show up in the film. All of this to say it would have been tricky yet doable, but it’s over now.

I am fine with Gunn and Safran rebooting the whole thing. After the second sequel for “Aquaman” and a sequel to “Shazam!” DC studios will most likely wipe the deck clean. Robert Pattinson’s Batman will exist for another Matt Reeves movie, but the future afterwards is unsure. Gal Gadot could also be done playing Diana Prince. Her “Wonder” days could be over, and that follows many films. I won’t cry too hard about Jason Momoa, Johnson, and Levi finding new things to do. They came, conquered in a way, and now the next stage is being set.

The minute Gunn and Safran came into the fold, one just knew there would be changes and some sacredly beloved characters would be left on the cutting room floor. The good news for SUP fans is that the character does have a place in the new DC world; it’s just a younger version of the character, so Cavill simply doesn’t work. It would be like asking Al Pacino and Robert De Niro to reprise their roles in Heat 2, even if they have aged nearly 30 years since the 1995 original.

But we just had a great meeting with Henry and we’re big fans and we talked about a number of exciting possibilities to work together in the future.

Comic book movies squash small inconveniences like that, but not this time. Cavill will find a way. He did lose this role and Netflix’s “The Witcher,” but that came after two seasons playing Geralt and a creative impasse. He’ll be fine.

Cavill is 39 years old, which leaves plenty of time to dive into another character. Or, since he’s played two well-known characters, perhaps it would be wise to climb into a couple prestige projects or indies. Maybe Guy Ritchie pivots from Jason Statham and Matthew McConaughey capers to a sequel for his underrated “Man From U.N.C.L.E.” remake. Whatever happens, I am excited both for the DC Studios upcoming slate and Cavill’s next phase.

No rage here. It’s tiring. Carry on, wayward souls. Now this here below is quite funny: