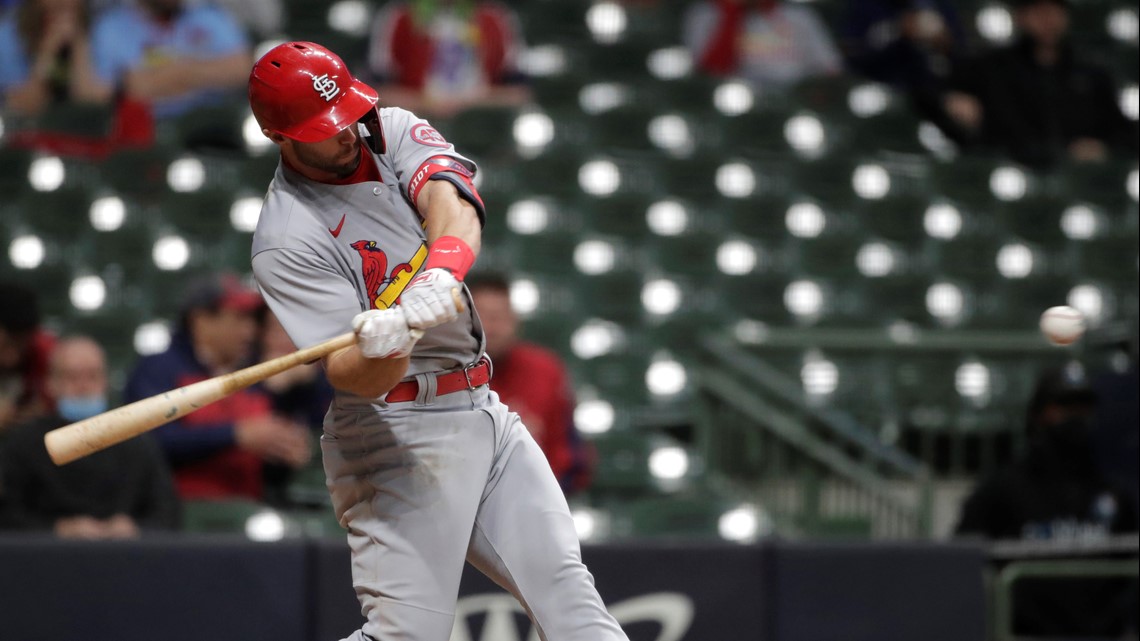 When you’re hanging with the old man, the need to impose your way grows–or so I think.

Tuesday night, as the St. Louis Cardinals and Milwaukee Brewers dragged a 1-1 duel into extra innings at the ballpark formerly known as Miller and I drove around the city with my dad, I tweeted out a demand at one of the highest paid Cardinals: Paul Goldschmidt.

There were better targets but the team was putting something together in the ninth inning. Due to Rob Manfred’s joke of a rule change, a runner starts at second base in the top of the 11th inning. So, there went little Tommy Edman to second, with Dylan Carlson coming to the plate. The rookie outfielder moved Edman to third with a groundout, and the Midwest Captain America walked to the plate.

Before we move any further in this tale, allow me to preface this whole thing by saying that I am not worried about Goldschmidt. The man will be a dynamic infielder until he retires, but the bat has been the thing in question. Two years ago during his first season, he relied on power and didn’t see his normal strong slash line-which includes on-base percentage, a strong suit for Goldschmidt through his entire career-while 2020 saw the OBP return to power with the power dipping lower.

This season, he’s been joined by Nolan Arenado while still hitting in the #3 spot, which still exists as a run-producing role in the lineup. The truth is simple: whether he’s getting on base or cranking up the power, Goldschmidt is still a genuine threat. Cardinal Nation may want him to be one thing or the other, but I will take the potpourri of “Goldy” rewards–which is what we saw last night.

So, Edman is on third and there’s one out. Top of the 11th inning and Mike Shildt will have to start getting extra crafty with his bullpen, especially at the beginning of a six-day road trip. Goldschmidt gets set to bat, and I tweet this out to my followers:

And then Goldschmidt hit a game-winning two-run homer. 3-1, Cardinals lead. Tyler O’Neill tacked on an extra three-run blast and as they don’t often say but should, that game was stolen by the Cards. Prior to the 11th inning, the team had three hits total and nearly triple the amount in strikeouts.

If you check the comments on that tweet, the fans tried to come roaring in to take me down for making such a claim. One user said the Cards should ditch Goldschmidt and bring Albert Pujols in (more on that later this week), which I think is a couple notches past dramatic.

All I did was use an old trick, one where you call out a ballplayer even though the feeling is optimistic in your head. I know Goldschmidt has been turning it on in May at the plate, going 12-36 with a .611 slugging percentage. That home run was his third of the month. I just get too worried about a guy who has been a machine for nearly a decade.

I mentioned on my podcast (shameless plug alert!) yesterday that Goldschmidt should be one of the last hitters on St. Louis’s roster that you should be worried about. He heats up as the weather does, and knows how to make pitchers pay. Sure, he’ll look like Lee Smith yawning in the bullpen on a particular swing, but then he’ll send the next pitch 430 feet in the right direction.

Remember, it’s a 162 game season that stretches out over six months. Since he’s expected to make 550-ish at-bats all in all, let’s give our own Cap (even if he doesn’t have America’s ass) a little peace of mind.

He’s good. No need to worry. Just allow me to pester him on occasion with my patented “he couldn’t hit the broad sign of a barn” tactic. All will be fine.

Goldschmidt may not be the shining star he once was in Arizona, but the truth is that isn’t required here. He’s got a lightning rod before-as well as after-him in the lineup. Do your part, swing the bat, show off the glove work, smile on occasion, and sleep easy.

Have a great day and thanks for stopping by the Dose.