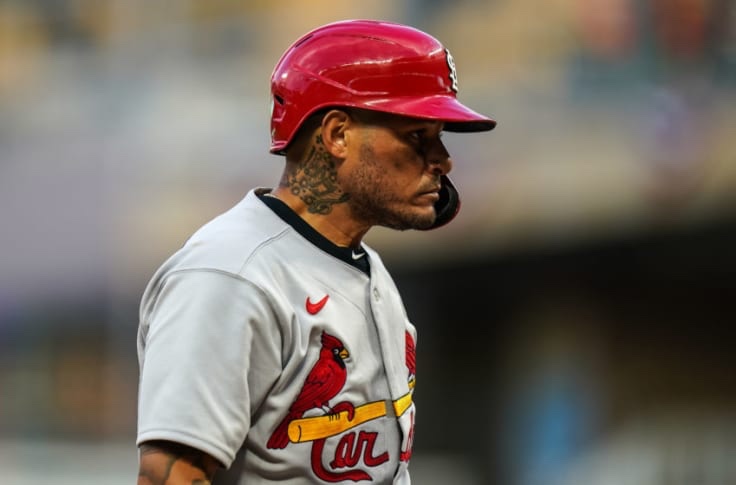 Five is a proud number. Ten is official. Six could be serious though.

Hence the title of my latest chapter of rants. Six things that make me go boom inside. Since most other writers (especially the very good ones) have already swept up five and everyone with a working keyboard has borrowed ten, I felt the need to introduce a different number. Six seemed nice.

Why not? A baseball or hockey team scoring runs/goals per game is beautiful and a recipe for victory. Six great movies is really all someone needs in life. Six quality pieces of fish to sear is a fine cooking experiment. Six pets is too much for most, if not, all families. Six pieces of cake can feed a house easily. Six ideas is just enough for the brain to handle at any given time. So, let’s talk about the six things creating friction in my brain.

Granted, these are very unfiltered thoughts, so posting them ( at least for now) at KSDK News is out. I love publishing there, but I can’t unleash all the words in my head, not even most of them. They have to be edited and squeezed like an orange over a glass so the juice is easy enough to swallow. Here, I can unleash more of the noise in my head. I don’t need a radio board operator to keep his finger glued to the drop button. It’s all or nothing at all, as in giving myself to you or deciding to remain quiet.

But here’s the real catch of this new writing series. I am going long and deep on ONE topic, and very short on five others. The subjects will vary, but if you know me, the prediction game shouldn’t be hard. I didn’t want to just hammer six evenly measured thoughts. That’s way too organized and tacky for my brain to handle. So once a week, I will take one very long look at one topic and a shorter, yet still potent and entertaining, glance at others. Capiche? Then let’s go!

I almost wish this conversation was more complex, but it’s not. Every October, Yadier Molina breaks and sets a new record. Most postseason games, hits, or long stares; all of it is a given with Molina, who ceases to age properly. While Matt Wieters looks every damn bit of his age, Molina just makes comebacks. Post COVID-19 scare, Molina put a hurt on the league, both at the plate and on the mound with his pitchers. He was better than ever, and not someone who was entering their late 30’s.

He has no contract. The Cardinals needs to give him one. Call it income tax on previous bad decisions. Get this right and do it quick. Pay him his demands or find a way to bridge the gap between now and the end. Believe me, it’ll get here one day. No one plays, or catches, forever. No one can just decide to go off on pitchers every single year in the latter years of their run. Molina is unlike no other and likewise, so important to a Cardinal team still trying to decide if it’s a World Series contender or a playoff pretender. You know, the kind of team that reaps in millions and just decides to be more honest with fans about their future plans.

All of those ideas and finalities at Busch Stadium need Molina on board. Please don’t mention age or blame him for the team’s failures in 2020. First, there’s something called COVID-19. Second, the rest of the team had a hard time hitting and producing. Molina did his job, exactly what you would (and should expect) out of a perennial All Star and future Hall of Fame catcher. Most still doubt him, and his arms and legs constantly defy those people. If Andrew Knizner is some big shot, and I do think he can hit some, why don’t the Cardinals replace Molina? Because Molina isn’t slowing down too hard just yet.

Sign him. Find the money. Lose a piece or two. Cut the leash on someone who isn’t doing their job and costing the team more runs than they offer them at the moment. Molina need WAR assessments or OPS investigations. His value hasn’t decreased yet. If the Cardinals want to build a new mothership of pitching, they will need Molina to do it.

You know, the nine-time Gold Glove winner who still keeps runners in check. It’s like underestimating a sniper in the cold snow. Just because the weather isn’t cooperating and the meter has been running longer than most still shooting, doesn’t mean you need to place a wall in front of their abilities. You may end up caught. The Cardinals could be defined as failing to meet even high level lofty expectations, but Molina sure isn’t. He needs more time off, just like any rumored machines do, but he doesn’t need a wheelchair yet.

Pay the man his money. Make it right. I wrote about it for KSDK back in January, so Bill DeWitt Jr. can’t say there was no plan available.

Look, the Blues should do it, especially if Steen was even halfway into it. If we put aside all the inflated leadership value (if they needed that, Pat Maroon would have been paid $900 last season), what exactly does Steen bring to the team right now that some other much cheaper young player could not? Tell me. Penalty killer? That’s replaceable for less than $5.75 million. Easily. But as the esteemed Jeremy Rutherford wrote last month, it’s just not likely so I refuse to give it much thought, much less its own useless clickbait article. There’s no last rope being thrown in during this “Keep Alex Pietrangelo At All Costs” episode, unless his name is Tyler Bozak.

Right now, the Blues need to decide just how important Pietrangelo is, and that should include a conversation about/with Steen.

3. WHAT YOU NEED TO KNOW ABOUT VIRTUAL LEARNING

It’s not a real headache, unless you make an effort to make it one. For me, it’s been the simple things like getting him to the table on time and making sure his homework is *located* and finished. I’ve missed the mark on the latter more often than the former, but we are doing our best. Mom has been the true MVP, calming down a storm between two boys. She’s the whiz in math and general school work, so we follow her lead. But for the most part, Vinny has handled it just fine. He’s a smart kid who likes to move around and doesn’t always give 100% of his attention, but he’s never behind for long, if at all.

Here’s the thing, though. While virtual learning has been relatively easy for our family, it may not be going so well for others. For that, you have ZERO judgement from this parent/dad. Hang in there, fellow creators.

It’s becoming more of a reality. Folks, once the streaming services got into the award competition and started throwing their weight around, the table was reset in a way. A global pandemic has just exhilarated that course by a mighty fair margin. The door has been kicked open, and I am beginning to acknowledge and movie theaters, chains and homemade, are in danger.

Example #1: “Mulan” did very good numbers for Disney Plus. If the pandemic was extended even longer, they could try the same with “Black Widow.” Yes, it’s becoming a reality. Example #2: Regal Theaters closed its doors today, signaling a shock wave through the industry. Following delays such as “No Time To Die,” which is its third shift, and “Dune” today to Oct. 2021, a good amount of theaters are going to take a fall. For a guy who loves them dearly, that’s very sad and becoming more true by the day.

5. WHY YOU SHOULD HAVE WATCHED KINGDOM BY NOW

I’ve written enough words about this former DirecTV and current Netflix gem to fill a couple of books, but it’s a rare blend of entertainment. Byron Balasco’s MMA show has a raw edge to its makeup, dialogue, acting, and overall aesthetic. People say “fuck” and “shit” a lot, with Frank Grillo adding “you’ve got be fucking kidding me” into the dictionary with conviction. It’s not for the sweet-hearted folks, but if they took the plunge, shirtless males and females fighting, with words and fists, each other isn’t a bad day at spend on Monday night after a hard day at work. By Tuesday morning, you’ll be wearing a mouthpiece at the cubicle and telling people they have superlative taste.

Here’s the thing. I have a terminal disease, and it’s called an addiction to this show. As I round second base on my third watch of Byron’s series, I am amazed at all the jewels that still pop and the new gems that keep appearing. The acting, writing, direction, look, sound, and overall aesthetic is ruggedly authentic and rather brilliant.

I have a problem and it’s that I need FRESH episodes immediately. It’s an issue that I am proudly suffering from. Maybe Netflix can help me.
6. THE DAM IN ST LOUIS HAS AN AMAZING DOUBLE CHEESEBURGER
When it comes to cheeseburgers in St. Louis, I can go on and on. If the city ever needed a Smithsonian Buffa Foodie Exhibit, I would game to give lectures, stand for pictures, and rant on about food. Burgers are just a specialty. They are the America’s pastime of food after all, a simple yet precise pleasure that never dulls or fails due to the scarce ingredients required to make a good one.
My latest burger crush happens to be The Dam. We tried them out last week, and I had to say the food coma was worth it. Even the overtime in the bathroom wasn’t too bad. Look, when you can crush a juicy cheeseburger and avoid the wrath of a toilet, it’s a superlative feeling to endure. I had two different kinds of French Fry appetizers that were mouth-watering, but the burger gave me that after meal glow that just eludes you so often. I’m talking about the mood boost and stomach hotel stay period. A burger that reminds you how great life once was, and how it could be again.

That’s all I have this evening. 6 things. One long and five short, like a pack of wolves coming at you. The first of many, hopefully. I’ll toast to that. So long, but just for goodnight.