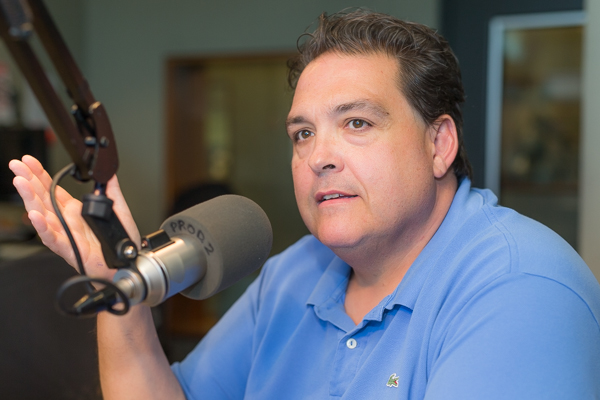 Late last summer, when Kevin Wheeler was let go from 101.1 WXOS ESPN, I thought to myself, “well, at least Bernie Miklasz is still there in the mornings.”

Today, that is no longer true. Miklasz, a veteran on the St. Louis sports radio and journalism scene, was let go amid a flurry of cuts at Hubbard Radio, which owns the FM station. The former St. Louis Post Dispatch writer was a staple in the mornings, anchoring the morning drive slot from 7-10 a.m. On Monday, he won’t be there and that’s a loss for listeners and people who care about smart, well-researched sports analysis.

It didn’t matter if he was talking about the Cardinals, Blues or the Billikens basketball team, Miklasz did his homework. He collected the stats, took his time, and assembled an opinion based on nothing but those stats. The best commentary writers, the ones who put themselves out there by stating what they think, don’t care where a particular opinion leaves them. They make it and accept the blowback. That’s what Miklasz has done, behind a keyboard or a microphone, for decades.

I don’t know the ins and outs of the radio business and times are tough, but @miklasz is one of the smartest, best sports columnists I’ve ever known, the elite of the elite. I can’t believe he was let go by @101espn .. just stunned. Let’s hope he’s back analyzing sports soon.

He’s the reason I wanted to become a writer of any kind. The story has been told a hundred times, but let’s go past the century mark. When I was a kid growing up in South City, I would race down Tholozan to a paper stand off the corner of Kingshighway Boulevard to grab the Post Dispatch. Fresh in my hand with ink that still felt warm to the touch, I ruffled through the sections to see if Miklasz had wrote something. When he did, a light illuminated in my head. I was happy for the next 30 minutes, 15 spent reading it a couple times and 15 spent taking something away from it.

Over the years, that didn’t change one bit. A few years ago, he left the Post Dispatch to do a radio show for 101.1 and write for their website. A couple years ago, he added his words to the esteemed website, The Athletic. When Miklasz was on, he could write 2-3 columns a day and pump out three hours of radio all with more bullets in the chamber. He had opinions and needed a place to lay them down. It was as simple as that.

Whether you were listening to him or reading him, Miklasz spoke with conviction. He wasn’t just a stat guy who liked bringing up the reasons why a hitter wasn’t having a good season or the fly in the ointment of a pitcher’s season. He put a lot of heart and passion into his monologues, informing the person on the other end of the line that he meant what was being said. It wasn’t a talking head hot dog stand or a hot take coffee shop, but a man who loved what he was doing and it showed.

Miklasz’s ruthless conviction made me want to be that writer/voice who had to get his take out as fast as he could. He was the one who supplied me with that need to impose my will on readers. That’s where it started over a decade ago. I’m the guy who would hide in his workplace watching the latest “Breakfast with Bernie,” a short-lived yet potent Post Dispatch video series. “DAN!” That’s what I would hear as I’d listen to Bernie offer his latest “WTF Matheny” criticism.

Part of me understands why WXOS made the call. Budgets are slimmer, profits are smaller, and everyone is getting squeezed. I didn’t get the reason for Wheeler, another tenacious radio voice, being canned last year-but Miklasz’s firing in a pandemic has somewhat of a reason attached to it. I simply don’t care for it.

Without him in the mornings, getting the first stab at breaking news that came out late on the previous night or overnight, I have less of an urge to fire up the app. That’s no disrespect to Randy Karraker and Michelle Smallmon, who will be taking over Bernie’s spot. They are good people who put out solid work. Over time, I could come to like what they bring and hold it in high regard. Karraker being stripped away from his Fast Lane partners will be interesting and odd at first, but that’s radio. It’s an ever-shuffling deck of cards with multiple dealers.

I just wish there was a way to keep Miklasz on the air. As Karraker said himself on Twitter, it was Miklasz who put 101.1 on the map. Maybe it came down to money. It *could have* been a refusal to move slots or partner up. I don’t know and won’t speculate further than tossing mere guesses into the void. Miklasz was always best when he was allowed to run solo, creating narrative spins on his own accord and without an offering from another personality.

Bernie Miklasz is a “voice” that cannot be replicated in St. Louis sports coverage. It may be “cool” to talk negative about him, but the point stands. Tell me someone that comes close to his impact on the area sports scene.

Joe Schwarz, who also wrote at The Athletic for a period of time, is dead on in the above tweet. Like or dislike, love or hate, one couldn’t place a layer of doubt on Miklasz’s impact on the local sports scene. Like the late Joe Strauss, he challenged others to see through the shaky veneer that sports teams put up for the media. Unlike so many others, he put his money where his mouth was by writing up exactly how he felt. Sometimes, it probably lost him some friends and followers. But it gave him peace of mind as he went to sleep.

As David Gray once sung, “the soul is the one thing you can’t compromise. That was Bernie to a tee. He meant what he said and wrote. He was Al Pacino’s Vincent Hanna in “Heat,” chasing down a story or theory like a bloodhound, refusing to stop until it was written down or spoken out loud. How many radio personalities can you place in the same class as Miklasz? The answer is very few.

Now, he doesn’t have a place to fire up quick blogs at or go on the air. He hasn’t written at The Athletic for a while. One could expect him to land on both feet somewhere soon, and taking a little time during a pandemic to re-calculate your future isn’t a bad idea. But I hope he finds a spot soon. I need that authenticity back. Whether you are a fellow writer, radio voice, or fan, Bernie’s take should mean a lot.

A few months ago, Miklasz came out of a long (for him) hiatus from writing to describe in detail what had been plaguing him. While some thought he was merely sick or taking time, Miklasz was battling depression, the shape-shifting villain who doesn’t care who you are or how much money you make. He wrote extensively how it had gotten control of him and beaten him to his knees for weeks, and how he found the will to overcome it and get back to the keyboard. You don’t beat depression; one only wins rounds against it with the hopes of one day getting past it.

That article is all you need to know about what kind of person Miklasz is and what he means to people. You can locate his heart and soul in that piece. It’s there, staring right at you. A relatable piece of journalism that often doesn’t get printed or published. There were no mentions of WAR, wRC+, or OPS. Just humanity on a page.

I’ll say this before I leave. I wish we had more ferocious voices like Bernie Miklasz. The same way I wish we had more honest politicians or less violent people in my city. A wish isn’t a command, though, in the radio business or pretty much anywhere in the world. You get what you get.

I hope Miklasz finds a new place to do radio at. As Derrick Goold said, he doesn’t have many platforms left to conquer.

You're on alert, streaming.

No matter where it is, another radio station or Sirius XM radio, Miklasz will thrive. Maybe he’ll find even more creative freedom to do what he does best: speak with authority on sports-related matters.

Wherever and whenever, I’ll be listening. So will many, many others.