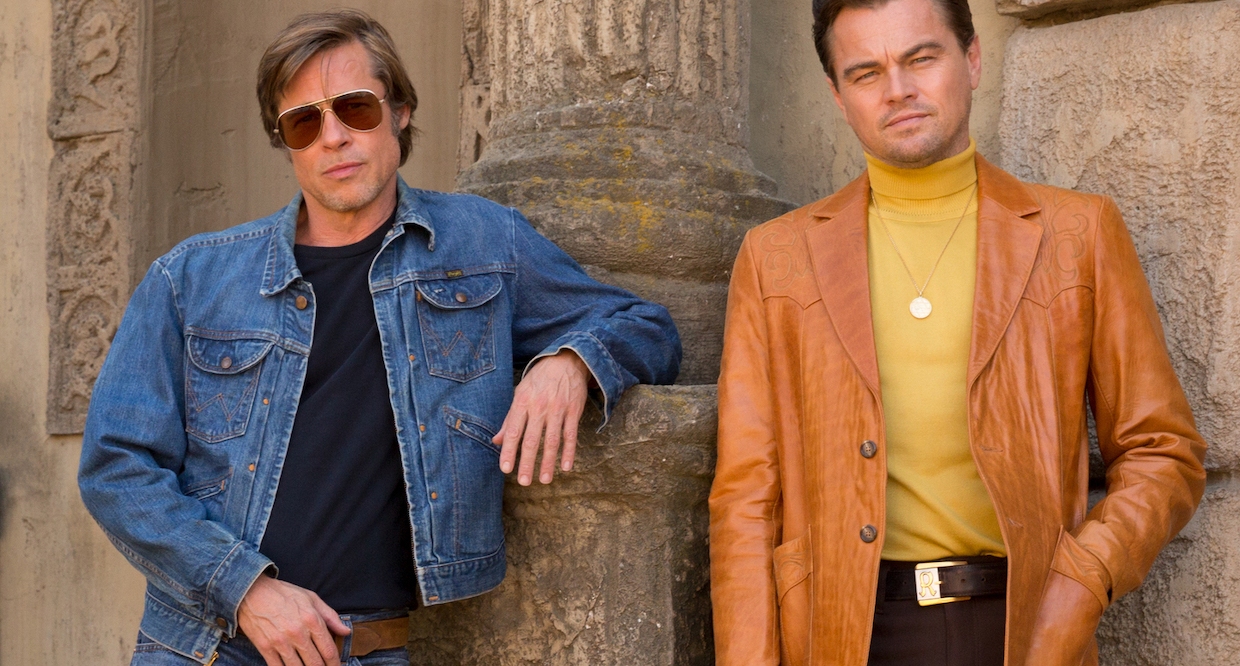 Rick Dalton (Leonardo DiCaprio) and his best friend/stunt double, Cliff Booth (a never better Brad Pitt), were once much-desired assets in Hollywood. One was the star of a hit TV show called “Bounty Law,”; the other was the dirty work handy man who sacrificed life and limb for his country in the war and then, Rick.

Dalton and Booth knew how Hollywood worked and how to make a living and a killing at the same time. As Quentin Tarantino’s Once Upon a Time … in Hollywood opens up, though, the good times are seemingly coming to an end for our two protagonists.

Here’s the thing. Quentin Tarantino is one of a handful of directors who has such a unique style that his imprint on a movie is noticeable within a few scenes, sometimes less. Along with auteurs such as Martin Scorsese and Steven Spielberg, Tarantino lets the viewer feel every single thing he felt and intended while writing and making the movie. His touch is a rarity in that even when the film doesn’t stick its landing the first time, you need to go back for seconds to make sure all that was served registered and digested properly.

Case in Point: I watched Once Upon a Time … in Hollywood twice in the past 24 hours. When I left the screening last night, I liked-but wasn’t close to loving-the movie. The nearly three hour running time made the pacing sluggish at times and some of the elements of the film-Old Hollywood, end of an era, dying breed of cowboy stars-didn’t land correctly in my head. It all comes back to the hardships in critiquing a film. Reacting too quickly isn’t a ideal, but necessary sometimes.

When I left the Galleria 6 Cinema around five o’clock this morning, I was blown away by what Tarantino had achieved. It just hit me like a ton of bricks. I was smiling, satisfied and amazed at the same time.

Let’s put it this way. Imagine preparing a brisket for the smoker. You take the proper amount of time in preparing the rub and the marinating process for the meat. It has to soak for hours in order to take in all the juices and herbs before the cooking process even begins. If you cut the effort in half here, the end product won’t be as good, so you wait. The smoking process takes over night, or at least six to eight hours.

Imagine if you tried to take the meat out of the smoker too soon or missed a seasoning sequence. Or try to imagine tasting the meat and just firing off an instant reaction. Sometimes, you have to go back for seconds or allow the flavors to unfold. Everything can’t be an order of onion rings or locally made pizza.

What Tarantino has done here is create a faithful and adorably honest homage to the old ways of Hollywood and its lavish history. Like Inglorious Basterds, he takes a real life event and throws it into a blender with made-up elements. Dalton and Booth are fictional characters thrust into a true Hollywood tale here. Set in 1969, as an era of production was ending (the cowboy television star) and a new shiny, unrecognizable one was ushered in, the film finds our heroes at odds with the changing landscape.

Dalton has been reduced to playing “the heavy” on television shows, basically dropping into a pilot to rough up the hero/leading actor (like Timothy Olyphant’s James Stacy) before being dispensed. Reality bites Rick when his new agent, Marvin Schwarzs (the irreplaceable Al Pacino), tells him that he is being slowly cycled out of the game with these hapless TV cameos. A hard drinker who is rolling down the hill slower than he thinks, Dalton has to decide if he wants to take jobs in a new country or slowly drift away in Hollywood.

Booth, once one of the more prominent stunt performers in the game, has been reduced to Dalton’s “gofer.” In other words a glorified assistant, fixing the antenna on top of the house or driving his hungover buddy to the set. As the narrating Kurt Russell (who plays two roles here) explains, Cliff is “more than a best friend but a little less than a wife.”

Here’s a guy who still longs for the good old days, recreating them wherever he goes. He treats the drive home like an action scene, swerving around turns and blazing around cars. He’s stayed in shape and still wants to stunt, but a questionable moment in his past crippled his career. While Dalton lives in the Hills, Cliff lives deep in the valley with his lovely pit bull, Brandy, behind a drive-in movie theater. One could say Cliff is disappointed that the old days are gone, but he’s accepted it far better than Rick.

These two guys find their lives thrown for a loop when Charlie Manson (Damon Herriman) and his trippy disciples (including Margaret Qualley and Dakota Fanning) invade their world. I won’t go further into the plot, but let’s just say history gets a makeover. I wouldn’t say it gets drunk, but the true events are definitely thrown for a loop .. in the best way.

The core of the film is the time-tested friendship between Dalton and Booth. Here are two different guys who found a common thread in Hollywood and create a niche that kept them together for nearly a decade. With the walls closing in, they have gotten closer, the bond strengthening instead of weakening.

DiCaprio and Pitt are the masters of this hypnotic universe, making you believe every poetic kick and punch thrown your way inside this movie. DiCaprio fits into Dalton’s clothes easily, instantly embodying a guy who missed the train and trying catch up. This performance involves soul-searching poignancy, self-deprecating humor, and the honest deconstruction of the evolving process for actors entering their 40’s. There’s so many speeds to DiCaprio’s performance that it took two rounds to fully digest it.

Pitt is the real standout of a film loaded with talent. Like DiCaprio, I couldn’t imagine anyone else in the role. He makes Booth equal parts mysterious and self-effacing, luring our attention slowly without effort. The actor has settled into a groove over the past ten years, avoiding easy paychecks and leaning harder into meaty roles. There’s a lot more to Cliff than the trailers or early scenes show us, and he plays a huge role in the bonkers finale. You can tell Tarantino wrote this with Pitt in mind, because it relies on his best traits: movie-star look deception, body language, and an ability to make a line really count.

Margot Robbie is the starlet, Sharon Tate. In other words, the innocent beating heart at the center of the film’s plot and real-life event. Robbie is splendid here, making great use of her scenes of Tate, who was just breaking into the game before her untimely death at the hands of Manson’s minions. A scene with Tate watching herself play opposite Dean Martin in The Wrecking Crew involves zero dialogue and is a fine showcase for Robbie’s talents as an actress. From The Wolf of Wall Street to I, Tonya to this, she’s a force to reckon with. Tate is an entirely different speed from those two roles, but she owns it here.

It would take a week to properly break down all the acting in this film. Bruce Dern, Olyphant, and Fanning are great-but keep your eyes open for quick bits from Tarantino regulars like Michael Madsen. Luke Perry gets a fine sendoff here, and the number of actresses in the Manson clan include a couple well-known faces. Damian Lewis makes for a killer Steve McQueen, and Julia Butters absolutely slays the screen, holding her own with DiCaprio as a young actress who shares a key scene with Dalton. There’s so many more sightings.

The production design is Oscar worthy. You could give Barbara Ling the trophy today. Tarantino likes to film cars driving by stores, restaurants, and buildings-and here, it’s littered with popular posters and visuals from that era. Arianne Phillips’ costume design is state of the art, and the soundtrack kicks a sweet groove just like other Q.T. joints. Technically, the film is aces across the board.

Tarantino remains a maverick of dialogue, but here I’d place more weight on his ability to direct. It’s the direction, in unison with Robert Richardson’s cinematography, that lends a lot to key scenes involving Cliff at Spahn Ranch with the Manson clan and the invigorating and highly enjoyable finale. He knows where the movie lover wants the camera, and he knows that since his entire career started with an adoration of film and its history.

Once Upon a Time … in Hollywood is Tarantino’s ode to that love for film and how it started, changed, and evolved. The film’s pacing became less of an issue the second time through, and I found myself wanting to go back a third time to pick up the tiny nuggets of detail that were missed. Every scene carries intent, because Tarantino isn’t here to waste our time.

Few filmmakers make films so personal. This is one of Tarantino’s most heartfelt and personal films yet, and also one of his best. While it won’t crack the top spot held by Pulp Fiction, it can wrestle with Kill Bill Volume 2 and Reservoir Dogs for the second and third spots of the list. There’s both a timeless allure and punk rock ode to the proceedings of Once Upon a Time … in Hollywood, his ninth feature.

It’s about a time when films were made a certain way with a particular prestige. Rick and Cliff may think the times have passed them by. Perhaps Tarantino is trying to bring them back.