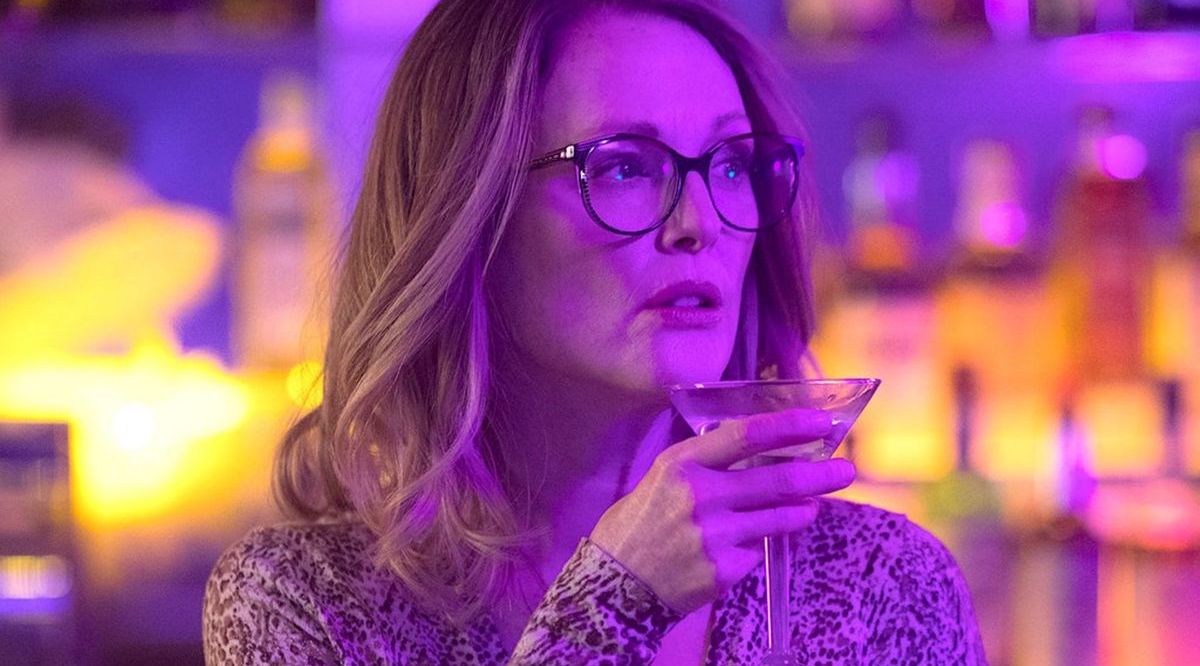 Gloria Bell is the epitome of a free spirit.

A divorced woman riding high through her 50’s, doing what and when she pleases. If she’s not rocking out at her day job as an insurance rep, she’s kicking back a glass of wine and shaking it on the dance floor. If you drive past her, be prepared for the greatest hits being belted out of Gloria’s mouth as she flies past you. Life is good for her, and that includes a pair of grown kids (Michael Cera and Caren Pistorius) who are living healthy lives.

When Gloria meets Arnold (John Turturro), a fellow divorcee, and begins a whirlwind romance, her life changes for the better … and the worst.

At its best, Sebastian Lelio’s new film, also named Gloria Bell, showcases an actress at the absolute top of her game. Moore fully embodies the title character in body, mind, and spirit. You don’t doubt for a second the actress is this easy living and uncomplicated woman. Watching her mix it up on at a disco bar or be there for her co-workers and family is a pleasant sight, and works for a portion of the film.

It’s when Lelio tries to twist that life around, going for romantic drama instead of bliss, the movie goes south and loses its rhythm. Instead of showcasing a gleeful woman handling middle age like a champ, the writers and filmmaker drown her life in misery and melodrama, which creates too many avenues for the simplistic film to handle.

While it handles the messy avenues that a divorced woman can find herself wandering down when she finds a late fling in life well, the film loses its pace when it does explore these morals and traits. Arnold is a very complicated man, and Gloria has no idea what she’s in for, yet the audience can see from a distance this relationship is going to fly off the rails. In some cases, that could be feasible to witness. Here, it’s boring.

Gloria Bell doesn’t know what to do with its titular character, so the film lacks meaning and loses its focus. Imagine a group of songs thrown together on an album, but the creator of the album didn’t give you a setlist, so you know which song belongs to who. All you are left with is a series of feelings and reactions in the characters.

The film could have used a little energy. The meandering pace drowns the interest in the characters, so by the final scene, which involves a predictable song and moment, you are fit to smirk and proceed out of the theater. You are left wondering what you just saw, but if meaning had to grasped, you’d promise to drink less wine, smoke less weed, and don’t fall for just anybody.

If there’s a redemption song here, it’s Moore. Goodness, she is electric when the film just lets her sing, dance, and carry the plot wherever she wants. Some people don’t need a backbone to prop them up at home. Some actresses just need the screen and that’s it.

When Gloria Bell gets complicated, the film loses speed on its fastball, thus losing the viewer’s attention and care.

While the lead actress is great, the movie she is in doesn’t amount to much and therefore, can be saved for home viewing.

If someone asked me if this movie is worth seeing in theaters with no room to wiggle around with the recommendation-basically yes or not-I’d tell them to wait for DVD.