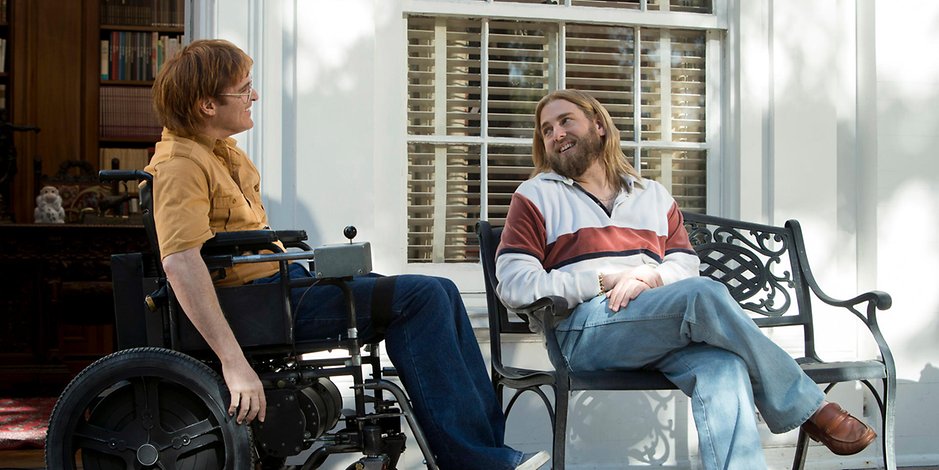 John Callahan (Joaquin Phoenix at the top of his game) had a condition, and it didn’t begin and end with the fact that he was quadriplegic. Sure, being a full-fledged alcoholic ended up costing him the use of his legs for most of his life, but that wasn’t the soul of his issues. Callahan thought that one brutal car accident and a wheelchair meant the end of days for everything good in life.

Gus Van Sant’s Don’t Worry, He Won’t Get Far on Foot is the story of Callahan’s rehabilitation, and it’s one of the most vividly honest dramas of 2018. You’ll learn something about life when you watch this film, and that’s because the filmmaker and cast make the story connect.

For Callahan, alcohol was his life and love. When he wasn’t drinking, Callahan was thinking about drinking. Breakfast and dinner were fluid ordeals, and no one in his life held a candle to a bottle of tequila. But after one hard night of drinking with a stranger (Jack Black, delivering potent strokes in a small role) left Callahan paralyzed from the waist down, the foolhardy ways of his actions laid in front of him for life.

It ended up leading him to some of the best things in his life.

If you know the name, you are probably aware of the real legend behind Callahan’s name. In the midst of his recovery, he started drawing satirical cartoons that caught the eye of newspaper and magazine publishers. Some of the politically driven pictures draw ire, but Callahan didn’t stop drawing.

The other aspects of his life, such as battling alcoholism, represented paper that he couldn’t draw his way out of. That’s where Anu (Rooney Mara) and Donnie (Jonah Hill, in an Oscar worthy performance) come in.

Anu is the nurse who helps rehabilitate John’s personal life, while Donnie acts as his sponsor. While Mara and Phoenix have a few sparks and their romance seems a bit forced at first, the scenes between Hill and Phoenix carry the best parts of the film. The two actors slip into the roles like a boxer putting on fitted gloves for the biggest fight of his life.

Donnie is a flamboyant rebel who holds as many secrets as virtues in his life, and Hill leans into the portrayal of an imperfect man who found a process in other’s hardships. While the underrated actor-who owns two Oscar nominations already even though known by most as a comedy star-only has a supporting role, Hill uses every moment to connect with the audience. You understand and need more of his healer, because it’s flawed and interesting.

Phoenix is a marvel and excels at showing us Callahan’s darkest demons. He was a messed-up soul before the car accident, so the change in his life accelerates a process that the artist wasn’t ready for. One may argue that the worst day of his life was day #1 of his recovery. You need an actor who can resist chewing scenery and instead display true heartbreak while playing a guy who isn’t easy to root for.

Also, I couldn’t get enough of the scenes with Callahan racing down streets in his motorized wheelchair. Phoenix matches the material, which is based on Callahan’s book of the same name, blow for blow.

You know Van Sant for three movies: Terms of Endearment, To Die For, and Good Will Hunting. You are right when thinking those movies are at least 20 years old. It’s been a while since the writer/director has scored like this on an award worthy level, with Sean Penn in 2008’s Milk being the last trace, but he still can produce first class acting classes on screen.

Van Sant doesn’t just elicit a performance from high-caliber actors; he is able to get them to convey an emotion that viewers probably can’t find elsewhere. He makes human dramas about healing. The hardest kind of healing.

Don’t Worry, He Won’t Get Far on Foot, which gets its title from a classic cartoon that Callahan drew about drifters finding a knocked over wheelchair in the desert, represents a fine comeback for the auteur. Moviegoers need more of this guy bringing juicy tales to the screen. It’s sure better than Sea of Trees and Promised Land.

John Callahan thought he was dead, but then he found his way back through pictures, people, and love. This is his story, and it’s a great one.

The film isn’t without its faults. The pacing is a little more, and the non-linear storytelling device isn’t easy to follow or grow close to. You’ll be pushed around in Callahan’s story, perhaps a mechanism from the story that took many twists and turns itself due to his battle with sobriety and acceptance. The movie isn’t perfect, but the acting sure is.

When awards season rolls around, it will be hard not to think of Don’t Worry, He Won’t Get Far on Foot.

Once you see it, it shouldn’t drift too far from your mind.