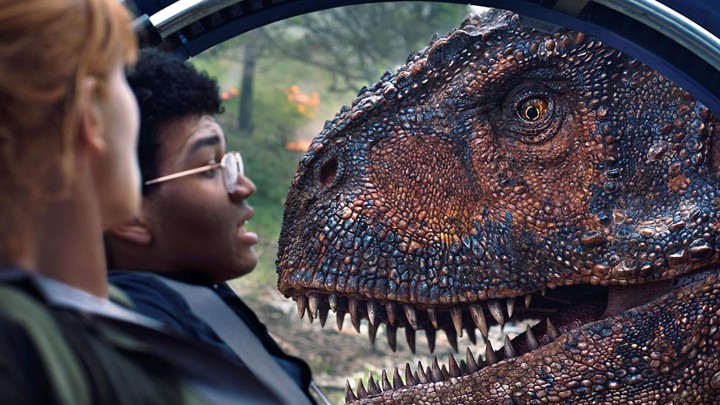 If you were here first, doesn’t that give you some sway for how you are treated or how you end?

While J.A. Bayona’s Jurassic World: Fallen Kingdom, a sequel to 2015’s Jurassic World, is an exciting, fast paced adventure film-the real themes strike home the hardest when it focuses on the victim’s in these tales: the dinosaurs themselves.

The creatures walked this precious rock first way back when, and find themselves defending not only the ground they walk on, but their future and mere existence as well.

Colin Trevorrow-who co-wrote the sequel while stepping away from the director’s chair-reintroduced the world to the majestic creatures in a theme park setting three years ago, and that commercial product backfired on the park manager, Claire Dearing (Bryce Dallas Howard), when her lab decided to make a hybrid dinosaur that helped destroy the park.

Fallen Kingdom opens up as the fallout from that near-catastrophic mistake is finally settling. Lawsuits are being finalized for victims and the injured, and legalization and diplomacy (I think) between animals and humans is being figured out. This allows for the return of Dr. Ian Malcolm (Jeff Goldblum) to explain the ramifications of messing with mother nature’s resident. With Jurassic World’s park about to be destroyed by a volcanic eruption, hard choices must be made about the species.

Dearing is still fighting for the survival of the previously noted species, along with web specialist Franklin Webb (Justice Smith) and medical expert, Zia Rodriguez (Daniella Pineda)-and when she meets up with the estate manager, Eli Mills (Rafe Spall), for Benjamin Lockwood (James Cromwell), an opportunity to rescue the dinosaurs springs into motion. She just needs the talents of Owen (Chris Pratt) to help rescue the most important one, the deadly yet trained raptor, Blue.

Of course, everything isn’t as it seems, and shady characters like Ken Wheatley (Ted Levine, chewing scenery better than anyone) will make you wonder what Mills is really up to, especially with the arrival of BD Wong’s Dr. Wu.

Just do me a favor and don’t think too much as the excitement kicks in, with dinosaurs wreaking havoc and tearing away at their human oppressors. The sight of a hundred dinos sprinting down the open field to safety along a few humans hasn’t lost any of the luster it first gained in Steven Spielberg’s original over 25 years ago. You’ll get antsy like a kid waiting for the arrival of the giant T-Rex, and love when Wheatley gets a little of his own medicine.

Pratt delivers the expected comic relief and convincing heroic endeavors as Owen, the man everyone seems to lean on due to his relationship with Blue. Like Dwayne Johnson’s connection with George the Gorilla in Rampage, Owen’s trust with Blue provides the filmmakers with a subplot that fuels the main story, giving it resonance and hope. What if a human and dinosaur could co-exist in a non-deadly format?

It’s amazing to think that Pratt was once the pudgy comedy guy on Parks and Recreation and now exists as the male face of two huge franchises. It’s not a gimmick either, because he wears the hero role well, blending Harrison Ford and Kurt Russell together to play Owen, the witty dinosaur whisperer with a good right hook.

Howard has slowly come into her own over the years, going from the innocent young lady in M. Night’s Village to the feminine face of a summer blockbuster. She puts in good work here, and doesn’t just run around as the damsel in distress. Equal parts beautiful and resourceful, Claire gets her moments in the action and it’s thrilling.

Levine is one of my older favorites, owner of one of the most terrifying voices in movie history. Who can forget his Bill from Silence of the Lambs or his truck driver in Joy Ride? He doesn’t have many scenes here, but gives the film its required antagonistic menace.

Here’s what I liked the most about Jurassic World: Fallen Kingdom. The small moments where you truly sit on the other side of the fight and see how scary life can be for a dinosaur. For the last 25 years and five films, all they wanted was to be left alone in peace and be able to live. Like a kid who can’t resist the urge to stick his hand in the cookie jar, the humans keep breaking this promise.

There was a moment in the Jurassic World where a brachiosaurus laid out dying on an open field, the victim of the hybrid dino that the human doctors and scientists created. A simple creature who just wanted to live out days in his own way. You felt for that animal right there in the middle of an exciting adventure film.

Well, there’s a similar scene in the sequel, where you see a dying brachiosaurus defiantly stand up against its fate, and it’s absolutely heartbreaking. Bayona takes the time to let this sequence play out and move you. It is proof that this isn’t just another fluffy summer film with one goal, but a quietly breathing metaphor on leaving other species alone-and the consequences of not doing so.

As a whole, Jurassic World: Fallen Kingdom works as a fast-moving adventure film with a few wow moments and enough intrigue into the world to keep a third film in mind. The ending isn’t a neat bow and there’s some dignity (and danger) in the wrap-up that will make you hope for more stories. Bayona wisely harkens back to Spielberg’s film without duplicating it. He makes his own film here and it’s FUN. Remember, moviegoers, fun is allowed at the movies.

If you like Pratt’s heroism, Howard’s growth, and the general spectacle of dinosaurs, this movie will be good company and a fine reason to get out of the heat.

Do me a favor and keep a lookout for the metaphors.