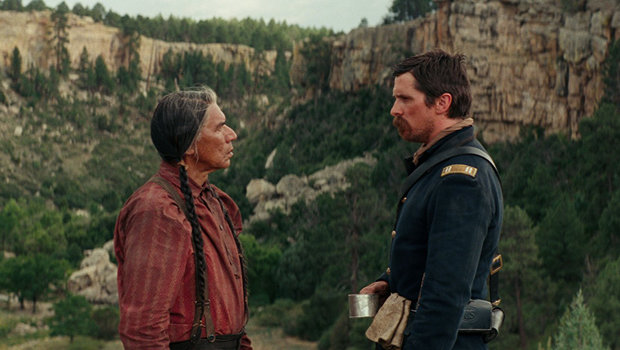 Captain Joseph J. Blocker (Christian Bale) is a conflicted man as 1892 rolls around and the last of the Native Americans are being rounded up by the American soldiers. A legendary leader to so many, he quietly battles demons about the things he has done in honor of his country-and wonders about the toll it will someday take.

Director Scott Cooper’s new film, Hostiles, asks the age old question: are we all one incident away from becoming violent?

Blocker’s inner demons are amplified when he is ordered to transport a dying Cheyenne chief (Wes Studi) and his family back home to Montana, through tortuous territory full of dangerous foes, including fur traders and Comanches. What would you do if you were thrown face to face with your sworn enemy for a long trip on horseback? The problems only increase when Blocker’s platoon take on a widow (Rosamund Pike) who lost her entire family to a Comanche attack. Let’s just say that not everyone makes it.

Cooper and Bale have hung out on this playground before in more modern settings, back in 2013’s Out of the Furnace. The actor and director have a good thing going here. There, Bale played a honest hard working man who was thrust into a world of violence when his brother went missing. That film moved in predictable patterns, but was entertaining and contained wonderful performances. Hostiles follows a similar trek, providing us with predictable plot points, but enlivening the proceedings with acting talent and well-shot gun battles.

Bale is simply marvelous here, digging deep into the soul of a man who is fighting himself to the grave. He shares some very good scenes with Pike and Rory Cochrane, who plays his second in command. This level of film requires a towering talent like Bale to keep it watchable and interesting. If Cooper gets a mere movie star to play Blocker, the authenticity plummets and the movie dies a faster death than most of the characters here do.

I really liked Cooper’s bare bones approach to action sequences, using realistic sound and arrangement to make the kinetic energy of the battles seem sudden and more brutal. Trouble awaits Blocker’s crew at every turn and mountain passage, so you are literally on the edge of your seat waiting for the next ambush. Characters that you just met and are learning to like perish quickly. Hostiles is a knock down drag out affair that isn’t for everyone. Kids and women die early and often, but that’s how it was back then, so I applaud Cooper for the honesty.

The wickedly intense Ben Foster shows up to place a thorn in the plot’s side and Adam Beach plays his fourteen Native American character, but the cast as a whole does very good work here. Pike impressed me with her range, especially in the earlier scenes. Her once innocent family oriented woman, Rosalie, gets a violent yet believable makeover as the film progresses.

It’s a pleasure to see Wes Studi work again on the big screen in a main role. A descendant from the Michael Mann school (Last of the Mohicans, Heat), Studi knows how to tap into menace, but he can dial it down when needed. Bale and Studi share the best scenes, two men battling their pasts and pitying their future. It’s top flight stuff that elevates the material.

The way that Cooper pauses to dig into the grief that follows violence is thought provoking. Characters don’t just kill, adjust, and move on. They take moments to examine what taking a life can do. It’s not over-extended, but it’s enough.

There’s a scene in the middle where Blocker comforts a fallen soldier, who happens to be African American. The soldier applauds the Captain for taking him in and entrusting him with duty. The Captain praises him as one of their best. It’s a timely scene that resonated with me due to the modern struggle of racism that plagues this country. A tiny yet potent moment.

That’s Hostiles for you. An old fashioned western with two brilliant central performances and a potency to its action that elevated a familiar tale.

If you like honest westerns with pathos and a very good Christian Bale, go check it out.