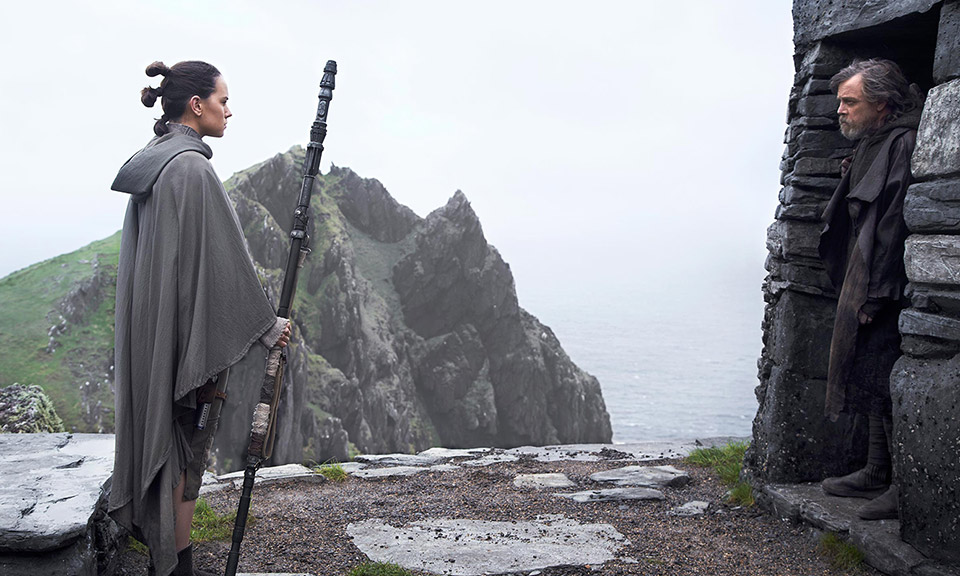 When it comes to Star Wars films, you either go big or you go home. Like a boxer loading up for one huge punch in the center of the ring, there is no halfway with these science fiction fantasy dramas. The intent should be to blow you away, leaving you in a daze of wonder as the lights come up.

Star Wars: The Last Jedi didn’t blow me away, instead leaving me with a relative nod of approval. A good, but not great, experience in the world that George Lucas dreamed up many, many years ago.

Don’t take this as a distaste for the film, because I enjoyed a fair portion of the overlong 152 minute running time. The Last Jedi is a serious case of individual spectacle with the overall perspective leaving a film fan wanting more from the experience. There were moments where the film rode high, but then long stretches where its intent seemed off and scattershot.

What’s the plot? For the 78th time, the rebellion is trying to defeat the First Order, with mixed results as usual. The rebels blows up a ship, lose 47 pilots in the process, and reload the fleet like a first person shooter game would by pointing the gun down at the screen. While watching this film, I wondered how many ships the bad guys have, because they keep getting destroyed.

Does Star Wars: The Last Jedi feel like a live action video game with extended exposition stuffed in? Yes. Does it work? Yes and no.

At the end of Star Wars: The Force Awakens, Rey (Daisy Ridley) found Luke Skywalker (Mark Hamill, emo-brooding) up on a mountain with no one around. Is Luke her father? Are they going to work together to take down the evil and misguided Kylo Ren (Adam Driver, digging into the villainy)? Does anyone smile around here?

All we know right away is living isolated Tom Hanks in Castaway style has left Luke a very bitter man. Director Rian Johnson has turned the hero back into the whiny character he was in the first film back in 1978.

Star Wars: The Last Jedi does provide answers to those questions during the course of the film, also checking in on Finn (John Boyega), Poe (a truly perfect Oscar Isaacs), and of course, Leia (the late Carrie Fisher, acquitting herself well in her last role). A lot of things happen, but little of it makes an emotional impact.

This movie has a whole lot of energy, but doesn’t actually say anything new about the characters or extend the story forward. Most of the events in this film are predictable, with the exception of a late switch-out during a climatic fight. Characters are given the chance to break bad, but when has that not been the case in a Star Wars film? Parts of this film were adventurous and saucy, while others just fizzled.

A tag team lightsaber battle midway through the film is extremely well done, but the rest of the action soon becomes repetitive. The fighter jet chase scenes, with the exception of the very first scene, follow the same pattern.

Excluding the terrible Hayden Christensen “prequels”, Star Wars: The Last Jedi felt like past Star Wars films, but lacked the distinct spectacle and emotional wallop. I enjoyed the Force Awakens’ action sequences, but was also struck by the dramatic elements, like Daisy meeting Finn or Han Solo (Harrison Ford, seriously missed here) trying to help Kylo Ren. There was energy and substance. Here, just a series of events.

A climatic fight scene near the end left me wanting more, and when the film got heavy in the end, I felt little to nothing. The credits rolled, I thought about the film for a few minutes, and left my seat. I didn’t want the film to go on, but wondered where the last 2.5 hours took me.

Also, Johnson didn’t put his stamp on the franchise. I didn’t walk out of this film and think this film was made by an auteur. It was just another guy in the director’s chair.

A quick disclaimer: I’m not a Star Wars addict, but I do enjoy most of the films. It doesn’t get better for me than Empire Strikes Back and The Return of the Jedi. That 1-2 punch ranks among the highest in film history as far as launching a story and wrapping it up perfectly. There’s a reason they stopped making these movies for many years. Only so much could be said. Then Force Awakens came about, and turned that notion on its head. Rogue One then presented an unknown origin, and created a soulful and invigorating journey. Rogue One tapped into a time period that wasn’t referenced yet, so it was fresh.

I left Star Wars: The Last Jedi feeling next to nothing. It wasn’t fresh. It’s like being promised a juicy porterhouse steak and getting a sirloin steak on the dry side. You’ll eat it, be somewhat happy, nod at the cook, but wonder what happened to the original plan.

Star Wars: The Last Jedi is an overall entertaining film with a few great moments, but ultimately, a letdown for this casual fan of the franchise. Since it didn’t blow me away-and this kind of film must-I can’t stop traffic in the streets and make them watch this flick.

Hardcore fans will adore it. Casual fans will either shrug their shoulders or give an understated nod.

Should SW: TLJ buy up real estate in my soul? No. But the film should leave a dent, and it didn’t.

I’ll wake up tomorrow, sip my coffee, and think about the next movie.