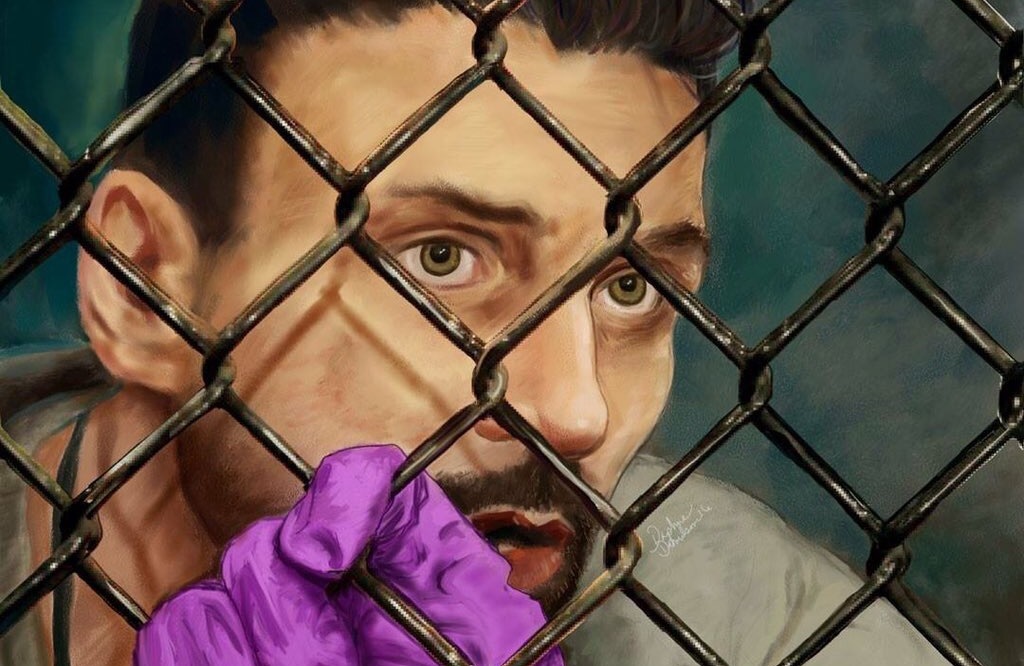 One of the bittersweet facts of life is that whether we like it or not, there are certain traits of our parents that can’t be deleted from our personality and can’t be hidden from our daily activities. The good things are promoted like an unbeaten championship fighter, but the bad parts are usually covered up and pushed into a corner, or at least we like to think it’s that easy.

We are our parents in so many ways that when the attempt is made to break out on our own, the past doesn’t let us go without mortgaging our future. The result can be an overbearing need to be as good, or better yet, try to be better than what came before us. Make them proud without sacrificing yourself.

This week on AT&T’s Kingdom, we were fed another brilliant hour of television, and my biggest takeaway from what fathers and sons do to each other in order to co-exist.

Example #1: Jay, Alvey, and a need to be involved

Jay Kulina (Jonathan Tucker) is trying so hard to NOT be like his father, Alvey (Frank Grillo), that he has stripped away everything that he is as person. He quit fighting, drugs, and doesn’t even hang out with his friends. He isn’t doing this to make a good life with Amy and his daughter; Jay is doing this to distance himself from a future painted in Alvey colors.

Since Kingdom debuted, there has been a seething tension between Jay and Alvey, like two similar beasts trying to figure out how to navigate their way down a highway in cars waiting to be wrecked.

When I interviewed Tucker last year, he broke down the Jay-Alvey divide. “He (Alvey) wasn’t a good father. There’s no love or compassion. He has an inability to see the wounds he has caused. Jay is an addict but he knows what he is. He is trying to seal the wounds that his father has torn apart,” Tucker explained.

Jay blames Alvey for the abuse done to his mother, the drugs and alcohol addiction that tore the Kulina family apart years before the show brought us into their lives. The love and compassion is something that Jay has all but stopped waiting for from his father.

Last season, when Jay won a title belt by cutting an extreme amount of weight, and the post-fight congratulatory moment from Alvey rang false to Jay, because Alvey seemed to make a bigger deal of the fact that his son won a belt, and not that he had done everything asked of him. Alvey was impressed by the belt instead of being proud of his son.

Jay elaborated on that moment: “You care about this trophy more than anything else. Jay wishes that Alvey would have put him in rehab or taken care of his mother. Now Jay has self worth because he has a belt. Alvey should have been proud of Jay when he came in under weight. It seems so false to Jay.”

Fast forward to Season 3, and Jay doesn’t invite Alvey to his daughter’s baptism. This was no accident. Jay didn’t want Alvey there. When he finds out from Nate (Nick Jonas) that everybody else including Lisa was invited but not him, it truly hurts Alvey. You can see it in the true grit expression on Grillo’s face near the end of “Ritual”. He has damaged something that can’t be healed, but he wants to try.

Think about this: one of the only reasons Jay went back to fighting was to try and make a last ditch effort to please his father. He saw how close Alvey was with Nate, and wanted some of that. When he made the comeback and won the belt, and saw the look on Alvey’s face of shock and awe after defeating Wheeler, something in Jay died. He did all of that to lock onto his dad’s good side, and it was for nothing.

Nate and the Ultimate Reveal

The other father-son dynamic on this show is between Alvey and Nate, with the ticking timebomb of a reveal of Nate’s sexuality. When Garo (Bryan Callen) tells Jay that the reason Dickson dropped out of the fight was due to rumors about Nate being gay, the pot starts to boil very quickly in several corners of this show.

Nate finds out from Jay as he is sitting down to dinner with his dad, and the acting from Jonas makes you tremble in nauseous anticipation at the reaction he will get from Alvey when the mystery is pulled away. How Alvey reacts could make or break his connection with Jay as well, so imagine losing both your sons in one reaction. That’s how fickle life can be to a flawed soul. You make one bad move, and it’s an uphill battle in muddy shoes.

Will a King Beast contract cost Ryan in the end?

Speaking of Garo and anticipation, he shows up at Ryan’s house with a brand new Dodger Charger, and wants to take him out for a night of cocaine, naked women, and perhaps some green paper. Garo offers Wheeler a three fight contract for 300,000 thousand dollars, and sprinkles 25K on top of the pot to get a signature at the strip club. One can only imagine this is how deals between fighters and promoters come to fruition in real life. Ryan signs the contract, much to Lisa’s dismay (she gets a text from Garo) and us as well. While I was happy Ryan is getting paid, I trust Callen’s suit as far as I can throw him.

Keith and his mad world

The new car and stack of cash can’t hide a tumbling down the rabbit hole of avocado despair Keith from interrupting phone calls and answering doors with a knife in his hand. Something is happening with Ryan’s “friend”, and the ending will be a troubling one. Creator/showrunner Byron Balasco’s writing is so good due to the fact that he has a restraining order from melodramatic tendencies in storytelling. His stories feel real and honest, and that shows in true fashion with Keith’s condition and the father-son trials and tribulations.

Every season of Kingdom has a poison it seems like, with Mark Consuelos’ Chapas in Season 2A and Lisa Esco’s Ava in Season 2B. They drop in to poison the well, and test one of our main characters in ways that usually ends in their death, but not before cutting their victim off at the knees. You take Chappo away from Alvey, and maybe he doesn’t tumble so far down the drunken path. If Ava isn’t introduced to old habits with Jay, maybe the Kulina son doesn’t run away from fighting. Maybe not, but this season, the new “oh no” disturber is Kirk Acevedo’s Dominick Ramos.

With Alvey going back to fighting and needing to train, the gym needs a helping hand on coaching, but this guy looks like trouble. Acevedo’s Ramos is an ex-fighter from the Bronx who talks like he’s pulling wisdom word for word from his stomach. The slow drawl style that he chooses every single word like a sniper chooses his ammunition is a warning sign that this guy has something else going on.

He interviews with Lisa (Kiele Sanchez) and Alvey, and when Prince offers him the job later, we see Ramos shoveling protein powder from a bag to a canister in his boxers. Apparently, there was some trouble back East with money and certain people, but something tells me this is tied to Alvey. Something during their interview-especially the phrase “the Kulinas cast a long shadow”-makes me think bad deeds are ahead.

Ramos may have gotten the job, but I don’t trust him for a second. He’s like a human can of gasoline being kicked over on the mats at Navy Street. Watch out.

The episode opens up with Joanna Going’s Christina stuffing a grocery cart with pizzas, ramen, and other goods. Did she become a nanny? Did she move somewhere? What is she doing? It turns out she has opened a brothel with Mr. Sleaze with an a Bond accent, with at least 4-6 girls posting webcam videos and doing some jobs on the side. If Christina can’t make a clean break from the life that has wrecked her life, she can at least move to a coaching position, and make some money.

Going was too good on this show to be killed off in that near overdose sequence from Season 2, and this season looks like a fresh body moving around in a wise soul. She helps nurture a young girl from Miami who gets roughed up in her first “scene” on the town with Mr. Sleaze, and is doing well. She doesn’t like that Jay is distancing himself from the family, but can’t help but cuddle her new granddaughter. She is one of the few that knows about Nate, so that makes me sweat in waiting for Alvey’s reaction.

*We all know the real estate thing isn’t going to work out for Jay, but will he at least get to punch that mean tenant in the jaw? As a person currently looking at homes and selling his own, I understand the decency in vacating the premises for a showing. Poor Jay. Trying to make an honest living, but that beast is always raging. Glad he still has the bags in the backyard.

*Who is taking care of Lisa? After getting so close to Wheeler at the end of Season 2B, Lisa is now living by herself and she looks lonely. Which male character will win this woman’s heart in the end?

*Did I mention how having just eight episodes left now is extremely saddening? We will all need a heavy bag in August.

*I have a fever, and I need more MAC BRANDT! The brown leather drug pouch is also a nice touch.

The thing I miss most about Kingdom when it’s gone are the Frank Grillo monologues. The soliloquies of wisdom that usually come on a couch or with a drink in his hand. Early in the episode, Alveys tells his therapist that he is returning to the ring, and part of that great speech from the trailer arrives. “I need to feel my full range of emotions. I need to be who I was.” If that last line doesn’t awaken something in you, get your pulse checked.

Grillo knows how to properly disperse gravity in his line readings, and when he talks about getting reacquainted with the beast inside, I had to rewind and watch it a few times just to soak it up. You can tell that Balasco wrote this character for Grillo, because the actor will never play another role that exists so close to his true self or mirrors his own fight in life, and he invests everything into these scenes and Alvey’s trek.

The scenes I rewind the most are the Alvey Kulina speeches. The moral compass of a show about flawed and damaged fighters needs to have weight, and Grillo packs a punch.

See you next week.