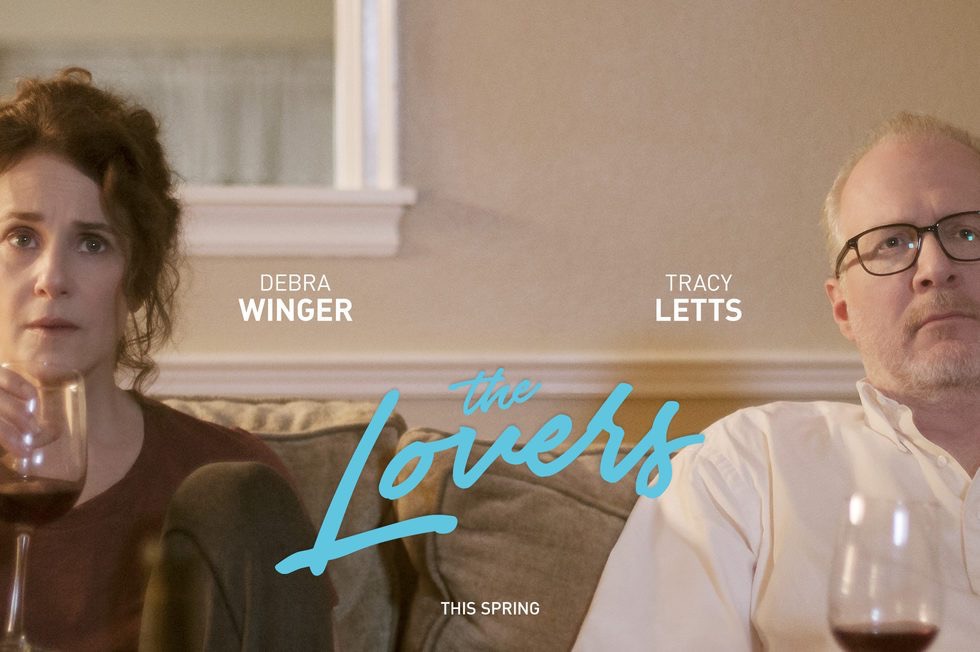 When we first meet Tracy Letts and Debra Winger in The Lovers, they are prisoners trapped in a thing called marriage. Deeply involved in their respective affairs (with Melora Walters and Aidan Gillen), they are finally setting sights on their escape when something crazy happens: the spark between them unexpectedly rekindles. The affair within the affair begins, with the weight of a decision levying a heavy burden on all four people.

For about half of the 94 minute running time, I was in love with the structure of The Lovers. It creates a realistic portrayal of an older couple struggling with the “happily ever after” ideal, and you’ll find yourself reflecting on your own life and choices as the characters struggle with their own. At once unpredictable and bold, writer/director Azazel Jacobs’s tale will hit a nerve and make you laugh during the first hour.

Then, like the title characters, I drifted apart from this setup as the follow-through occurred. The movie seemed to pick up a different dealer midway through the story.

Once Letts and Winger return to each other, you start rooting while knowing that eventually, a hatchet will swing down and destroy everything.

The hatchet comes in the form of the couple’s son, who arrives with his girlfriend disgusted at the way his parents have acted. To him, they have wasted what was once sacred and hates them for it. While initially noticing the warmth between them has returned, things eventually come to a head.

While the climax is well played, I didn’t agree with the resolution. It simply didn’t sit well with me or follow the course that the story seemed to be taking. Either they couldn’t decide how to wrap it up, or just descended ahead on a sloppy path.

It didn’t help that the pacing was snoozy, with a theater play type feel settling in. Jacobs is trying to say something about the endurance test marriage presents and how fresh love can sneak in, but the finale taught me little that I didn’t know before, so  the experience wasn’t worth the sit.

The acting almost makes it worth the trip.

Letts is a competent character actor when he’s not writing great scripts, and here he gets to stretch his legs as an older man stuck between an uncomfortable rock and a hard choice. Winger doesn’t work enough these days, but quickly imbues her heroine with a much needed edge.

Gillen may be known for seedy roles on The Wire and Game of Thrones, but he makes the most of a limited role while Walters (Magnolia) injects passion into her lover. They are younger souls sitting in the waiting room while their lovers figure out what they want to do. Tyler Ross doesn’t provide much depth with an important role, and that trips up the execution of the third act. His son’s rage and sorrow is predictably played. Jessica Sula is largely ineffective.

While I respected the ambition of The Lovers, I didn’t like the indecision in the way it conveyed its message in the end. What started as honest ended up as a run of the mill course on old love.

Save your hard earned money for something else-The Lovers can wait until Red Box.