Why can’t we just lay our egos and beliefs aside and learn to accept one another for who we are?

Let me back up and explain.

I’m an emotional person. When something bad happens, I react immediately. I wish I could take my time and wager a few thoughts but I just say or do what comes to me right then. I came out of the box swinging hard on Monday with my initial reaction of The Orlando Shootings. Like a boxer going for the knockout in round 1. Let me try again.

Part of being human is not only being yourself but accepting that certain things are out of your control. This shooting in Orlando has been on my mind for three days and I haven’t been able to wrap my head around the logistics of a solution or how to help prevent it from happening again.

I don’t know anyone in Orlando, Florida nor do I know much about Pulse, the nightclub where 49 people were killed and 53 were injured. That’s the thing. You don’t have to know someone to feel a pain when they lose their life. After all, we are all human beings trying to survive every day while carving out a little work in the process.

I can relate to a young energetic person overflowing with free will who just wants to dance, drink, and hang out with his or her friends. I can also relate to the parents who got a nauseous phone call in the middle of the night about their son or daughter being hurt or worse, dead. That’s what happens when you get old and become a parent. You see things from both sides of the coin.

Somehow, you manage to get wiser.

Whenever something terrible happens, the emotional response comes quick. Twitter explodes with hot takes and the Facebook politicians see a lane to drive their philosophy down our throat at 100 miles per hour. The process is messy and brings out the worst in most.

The first thing I thought about were the families. That was painful. Too painful. As a parent, your job is to keep your kid safe at all times. To your last breath. That’s the job. As they get older, it gets harder. When you find out you failed at your job, there is no medicine to cure the feeling of knowing this world will never be as bright again. You feel like your heart was ripped out and tossed around like a wiffle ball.

When my son almost died mere weeks after he was born, I felt like a pair of gorillas were having a tug of war with my heart. I can’t imagine if he didn’t make it. The families always get my first thought.

The second thing that came to my mind was “how the fuck do we fix this shit?” It’s not about what religion you believe in or which wing you rest your political beliefs on. It’s not about whether you are registered to the NRA or are against gun usage. You can’t take away gun owners FREE right to bear arms and protect themselves. You cut into people’s freedom and you are hanging on by a very thin thread.

At the same time, lunatics can’t get their hands on a weapon that fires 35 rounds in 15 seconds. It can’t be so easy. You can’t let any random guy carry around a deadly assault rifle. How do you regulate that? Fuck I don’t know. Someone asked me the other day about that and I drew a blank.I’m no politician.

The thing about freedom, politics, and rights is the argument is a circle that you constantly run around in. You aren’t wrong in your beliefs but more often than not you aren’t right either. Again, it’s messy. Enter at your own risk.

The fact that this is a hate crime is much worse than a mere act of terrorism. Hate is a bigger monster than terrorism. I’ll never understand one’s hatred for another due to what sexual preference they have. I’ll never understand why it’s everybody fucking business to judge you on who you sleep with. Every fucking day, I hear people rant about freedom and how it’s so cool. What freedom do we have here if two men can’t kiss each other, be in love, and be together in the same way a man and a woman would be?

How is it free when it took until 2015 for gay marriage to be legalized in all 50 states? You walk up the street, see two women hold hands and kiss, and so what. Keep walking. Feel happy that two people found each other in this mad mad world and are happy. They aren’t trying to hurt you. Happiness is a nice idea. More importantly, acceptance is a wonderful thing.

How do we grow from this terrible tragedy? How do we learn from it and improve? We learn to accept others for what they are. If someone wants to love a certain way, let them. Instead of slapping strict gun laws on each other, let’s do something a lot easier. Accept and love each other a little more. A little. You don’t have to make friends with everybody. Just accept them. You have no idea what is going on their lives. No idea. Why not just let them be?

Don’t judge. Accept. Don’t hate. Accept. Love the fact that they aren’t harming you, your family, or your future. Accept. If the killer had merely learned to accept the people that night at Pulse, bloodshed wouldn’t have happened. Yeah, it’s that simple. Instead of hating, accept the fact that there are certain things you can’t change, affect or have any business worrying about.

The shooter more than likely didn’t know any of the people he killed. Do they ever? They are merely aiming a gun at what they can’t understand and/or accept. This is the problem.

Tuesday, I watched a video on Facebook of a former CIA agent talking about her experiences with families overseas and even interrogations with criminals. In the end, her message was simple. Know your “perceived” enemy before you attempt to kill him or her. You’ll find that you are killing each other for the same cause. A mere misunderstanding. Failure to understand or accept one another. When are we going to stop killing each other and just fucking accept each other for who we are?

Example. If there was well trained armed security guards outside any of the schools that have been affected by shootings in the past 20 years, 95 percent of them wouldn’t happen because the shooter wouldn’t fucking make it into the school.It’d be over quick.

This is different. This was a hate crime. Acceptance is and will continue to be the issue there. You outlaw guns and these mad people will still get their hands on them. You try to teach acceptance and you never know what could happen. 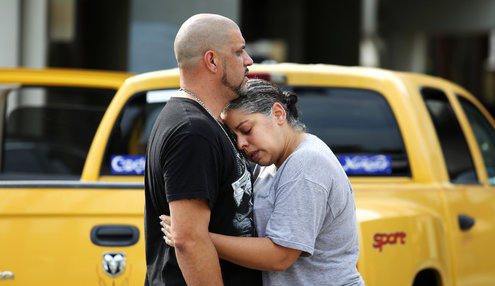 You know who a monster is before they become one? A person. A regular human being.

If you learn anything from this shooting, know that if we could all could just get the fuck along and accept each other and leave our religious bias out of it, the world would be a better place.

If this didn’t make you feel better, try these two brilliant articles out.

Carly knows a thing or two about loss. She dished on a way to be better.

Bruno, an Orlando native, talked about his experiences around the area.