The sweet isn’t as sweet without the bitter my fellow Kingdom on Audience addicts. In order to taste the top, you have to know what dirt on your nostrils feels like. In the second to last hour of this furiously entertaining and poignant season of the Direct TV series, fights are won lives change and are lost. This episode was about great acting. Underrated acting. You won’t hear about it at the awards ceremony because it’s MMA, but it needs to be appreciated. 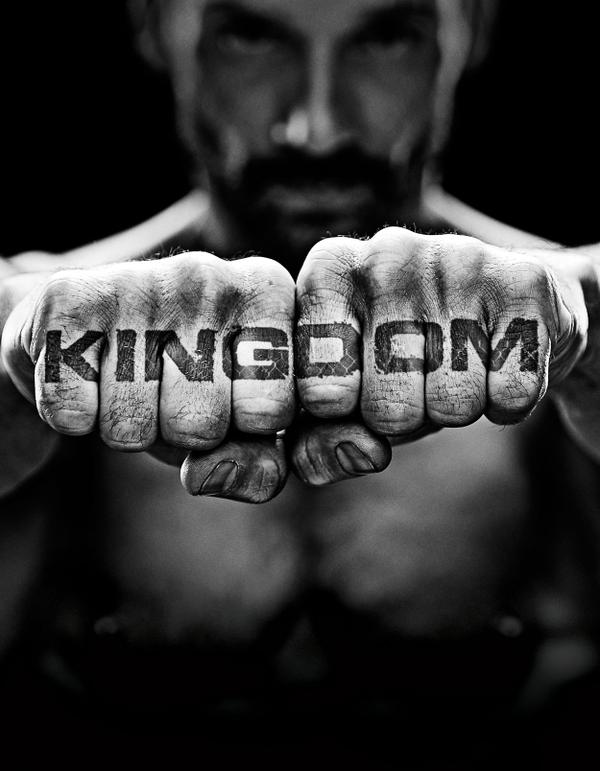 If you haven’t watched it yet, stop reading now. The rest of you, wrap your hands and follow me into the steamer.

The episode opens with Alvey Kulina rubbing and cocking his weapons. The same guns he bought in “New Money” back on October 14th now look to be going back. Is he trying to make a way for Lisa to come home? You bet. He is undoing all the suck in his life that has added up in Season 2. Did it work? Of course..not.

LISA IS MOVING TO SF

After a tense breakfast with Alvey(Frank Grillo), Lisa(the lovely and glowing Kiele Sanchez) is taking the unborn son of the man to San Francisco for the birth and for perhaps longer. This has been felt for several episodes. A woman trying to raise another kid around the maniac arena of MMA, drugs, drama, and constant pressure. Maybe getting away to SF is for the best. The aftershock of this decision make any optimistic twist in these final two hours a mere tease of happiness.

Lisa’s scene with Jay in the locker room is so well played by Sanchez and Tucker. She tries to make it okay in her mind that leaving won’t hurt him and as he shreds the pounds for a title fight, he insists that the little Kulina is top priority right now. Of all the men on this show right now, Jay is looking out the most for Lisa’s needs. The look Sanchez gives Jay spells out the pain she feels. Tucker, as charismatic as a wrecking ball with eyes, is excellent here. He’s a gifted dude.

ALICIA GETS A CAR AND SHAME

Remember that sweet and bitter thing? It’s best not to celebrate a new car from an energy drink company after winning an exhibition fight. Alicia gets the keys to a brand new Mustang and freaks out like it’s her sweet 16. Granted, she nearly got mugged in her sleep three hours ago, but still, on a cut day it’s best to smile, fist pump and go back inside. Mendez is so up and down it’s hard to know where her story is going. Nate(Nick Jonas) has to talk her down and tell her to respect the house. Lisa tells her to give the car back so she can actually get paid. Sweet. Bitter. Hand in hand.

CHRISTINA CLEANING UP OR GOING DOWN?

A week after watching Jay inject himself with heroin and seeing her world come crashing down, Christina needs her own place. An apartment looks great but with the competitive market(1700 per month for that!!) and her history, the chances of her getting the place are remote. So she tries to play the sexy and beauty part, only to be rebuffed by the realtor, who is an ugly despicable type but isn’t being rude with his requirements. Christina is an ex-junkie without much work stability. Escort service doesn’t look good on a past work slot even in 2015. When she goes to Alvey to co-sign, he turns her down. Without being able to look at Jay and getting denied, things are looking down for her. Way down.

RYAN SEEKS PEACE/DOESN’T GET IT

It’s cut day for Wheeler and he’s a bottle of nerves with a bent cap. Matt Lauria allows his expressions to do the heavy lifting in this episode. Pretty much every episode. Whether it’s him on a bike in the sauna trying to cut six pounds or talking to his dad about his latest condition or begging Keith to be quiet on fight day, Lauria needs the least amount of words to dominate a scene. When Lisa tells him she is leaving, what viewers thought was gone this season(his feelings for her) reawaken after they embrace. Lauria, clenching his face and neck like a sniper would pull on the hammer of his rifle, is the epitome of intensity. These actors know the only way to become these characters is to suck it ALL in. So good and well trained.

JAY GETS HIS SHOT

The colorful yet reckless Kulina has been waiting for this opportunity for a long time. He’s watched his brother Nate get three fights and Ryan Wheeler carry a belt after leaving jail. He’s the guy at the party holding the keg for others to fill with beer. Now it’s his turn to get a taste. The man picked most likely to screw it all up is chomping at the bit and after finally cutting the weight and making 145, he climbs into the ring an angry man. Who cares who he is facing but there is a belt at stake and a shot at redemption for a man as reckless as he is talented. Seeing Tucker whisk through a warmup to the underrated whiskey drunk sounds of Spottiswoode’s “Blaze of Glory” is so well done and taunt. Instead of leveling the audience with hard rock or metal, Creator Byron Balasco has the confidence to toss an acoustic misery track into the pre-fight mix reel. Bless you, o’bearded one.

What happens? After nearly tapping out in the first round, Jay takes Alvey’s advice and knocks his challenger out with a cold knee to the jaw. He’s a champion. Finally. The emotion between Frank Grillo and Jonathan Tucker in this scene is so genuine you forget there are cameras around. Kingdom has a way of pulling you in so close that the stink, sweat and grit from these characters rubs off on you. It doesn’t fake a thing. Alvey told him he would fail and Jay proved him wrong. The entire time, the joker grin on Tucker’s face tells the entire story and Alvey just eats it. His son is a champion. Alvey is shellshocked that it’s Jay and not Nate. How life deals your cards is only half the battle friendos. Gotta take em and fight.

Sweet and the bitter. While Jay was warming up before the fight, Christina, at the end of her rope, was prepping to a dose of heroin. A big dose. A song played in my head. Sweet Child O’Mine. Any TV fan knew what was coming. She was going to OD while Jay fought for the title. The sweet isn’t as sweet without the bitter. The devil is a block behind happiness at all times. Jay tries to call his mom after the win and gets nothing. Back at home, the camera pans to a lifeless Christina right before the end credits roll.

Ladies and gentlemen, prepare for the boat to be rocked. Jay will most likely blame Alvey for not helping his mom but as the old lion said, she does this to herself. It’s a cycle for addicts. They fall into bad habits, rely on easy shortcuts and eventually slam into a brick wall of adversity. They are a stinky pair of underwear to society. None of this matters to Jay. She’s his mother. He won the belt but lost his mother. All in one hour. That’s life. As Rocky Balboa urged his kid, nobody hits harder than life.

~Adored the rambling about cold vacations, good food and big boobs between Ryan and Jay in the sauna. Comic relief.

~Poor Keith doesn’t understand sports. You can’t talk to a pitcher on his day to throw. Same for fighters.

~MVP this season goes to Kiele Sanchez. She is REALLY pregnant and handling all these kids. Did I mention she is gorgeous? Wow. Remember when she fought Milla Jovavich in The Perfect Getaway? She was Timothy Olyphant’s girlfriend in that film. Olyphant would go on to play Raylan Givens in Justified and have a showdown with Tucker’s Boon in the season finale. Sanchez also starred in Purge: Anarchy with Grillo. World just shrunk a bit. Love you Kiele.

~Thank you Joanna Going for being a force of nature as Christina. You were a storm cloud, pocket of light and loose cannon all in one. What a performance.

~What happens in Wheeler’s fight? He has to win because a title fight with Jay would be the driving force behind Season 3. Right? We shall see.

Unwrap your hands, take a lap and see you next week for the Kingdom Season 2 finale.