The Real Deal. That is Atlanta Georgia native and boxing legend Evander Holyfield’s nickname. And it fits. He is the only boxer to win the heavyweight championship four different times. He fought until he was 48 years old. He engaged in battles with Riddick Bowe, Lennox Lewis and none other than Iron Mike Tyson. Back in early November 1996, I told any breathing soul around me that Holyfield would beat Tyson in their November 9th mega fight. It was happening and nobody believed me.

As 30 for 30, ESPN’s brilliant sports documentary series, chronicled this week, Holyfield spent the better part of his boxing career chasing not only Tyson but his reputation and mythical presence as the news hungry bad boy of the sport. The 77 minute tale is an invigorating account and paints a bittersweet picture of The Real Deal. While he beat Tyson, he never got the respect because their rematch ended in a bizarre manner. This came years after a fight with Bowe where Holyfield was about to knock him out when a parachuting spectator landed on their ring. Throughout his career, Holyfield never got his rightful spot atop the sport. He did get the best of Tyson. He didn’t just knock him out. He made him go berserk. 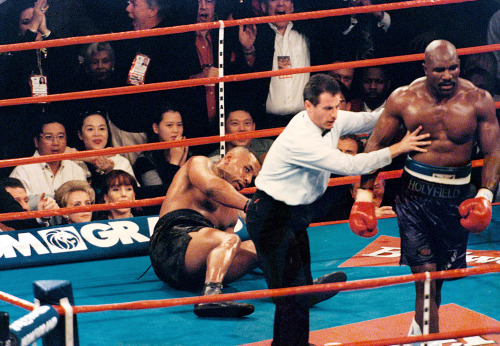 In 1996, Tyson, fresh out of jail, was kicking everybody’s ass. He kicked people’s ass faster than the arena he fought in could fill up. He got a vacant belt and after years of delay, was set to fight Holyfield. Evander wasn’t in a good place boxing wise. He lost the title years before to Michael Moore, and then left the sport due a heart condition that ended up being misdiagnosed. He returned and lost a one sided third fight to Bowe. He beat a nobody in Bobby Cyrz and got set to face Tyson, who everybody was still enthralled by even though he had just went to jail for beating up and raping his girlfriend Robin Givens. Back in the day when Ray Rice’s ordeal would have been called lame.

Few people gave the old man Holyfield a shot. Why would they? Even though Holyfield had fought everybody in sight, beat a majority of them and held a more impressive record than Tyson, he was the underdog. Without saying it, people still didn’t buy into this guy. No one fought with more heart or tenacity than Holyfield. He redefined what a hook could do to a man’s body and head. When you think of a boxer digging at another man’s body, you think of Holyfield. Yet, to everybody else, he was boring. A boring two time champion who didn’t duck Tyson. Mike hurt his ribs and a 1992 bout got voided. Then he went to jail for the aforementioned rape, but to boxing fans it was Holyfield’s fault. After much delay and hardship, these two met in the ring. Holyfield was a 25 to 1 underdog.

The result was legendary. I remember the second round the most. Tyson hit Holyfield flush with a right hand and the guy barely moved. He took Tyson’s best shot and kept coming. It was over right there. As the fourth round came along, Holyfield began to find new life and tagged Tyson at will. He was winning every round. He punished Tyson’s ribs and landed clean hooks to the head. Tyson was wobbling by the 9th round and went down on a Holyfield left hook. By the 11th round, Tyson was hitting hammered. He had nothing left and Holyfield knocked him out. People were shocked. They thought they were seeing an alternate reality. At last, Holyfield had beaten Tyson. He finally had a shred of the respect he deserved.

In May 1997, a rematch took place and everybody and their best friend’s uncle knows what happened. Frustrated after a few rounds of Holyfield dominance, Tyson bit the man’s ear twice and was disqualified. It was over. In a voiceover during the 30 for 30, Tyson said he was so angry with how good Holyfield was and lost it. In the end, after losing to Holyfield again, Tyson had the most coverage. In defeat, he created a spectacle with the ear bite. To this day, people will remember the ill-fated rematch instead of the mesmerizing first fight where Holyfield knocked Tyson out. History has a nasty way of defining a man’s legacy. 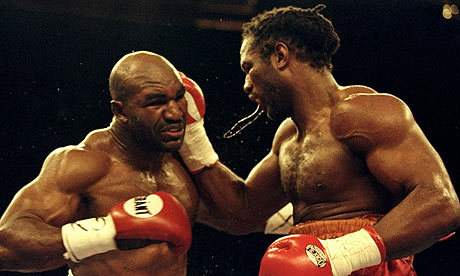 The champ didn’t rest. Holyfield would eventually meet Lennox Lewis in a thrilling pair of matches in 1999. In earning a draw in a match many boxing analysts called one of the worst decisions of all time, Holyfield was once again on the flip side of notoriety. Many thought Lewis won and in a rematch, he indeed beat Holyfield to win the title. Later, Holyfield would beat, lose and earn a draw in three consecutive fights against John Ruiz Holyfield beat Hasim Rahman in order to get a third crack at Lewis, but instead Lennox chose Tyson and destroyed him. That was the last time Holyfield had a chance at the title. Throughout his whole career, Tyson never stopped pestering Holyfield and blocking his legacy.

What deserves to be remembered is Holyfield’s dominating win over Tyson, his furious bouts with Bowe, his toe to toe battles with Lewis as he neared 40 years of age and his unwillingness to quit. He is easily one of the most underrated boxers of all time.

Do yourself a favor and watch “Chasing Tyson” on ESPN On Demand or catch it on the network this week. If you don’t appreciate Holyfield now, you will after it is over. He was one of a kind and a brand of heavyweight that doesn’t exist anymore.