“Every man will whisper to themselves at some point. Am I one of the weak or one of the strong?”-Alvey Kulina

In life, all men know and understand that they reside in a kingdom. They spend their entire life wondering where in that kingdom they belong. Down with the peasants. Cleaning up the streets. Defending with a sword in their hand. Hiding inside their home. Do they belong next to the throne or in the crowd watching the king? That follows all of us around every day.

Creator Byron Balasco(Without A Trace, Huff) didn’t just bring us a show about MMA and its fighters. This show is special because it stretches outside the octagon and into an uglier harder to depict fight in our life. The dysfunctional aspect of family. Nobody hits harder than your own family and the way they look at you. A stranger can punch you in the face 10 times but if a brother looks at you like something lesser than a man, the effect is shattering. The training, fight scenes and testosterone ballet in Direct TV’s Kingdom is fine seasoning and will keep you away, but the powerful hard knock portrayal of inner demons, family rust and the dangers that await these characters outside the ring is what will spin in my head for weeks until the second season premiere on October 16th.

What’s so good about this show? Everything, but let me be more detailed and articulate for those of you who need more a brochure for your next TV show binge.

Frank Grillo, a man with Atlantic City going on inside the high arches of that Italian hair, was born to play Alvey Kulina, the patriarch of a family of MMA fighters. Grillo is a 50 year renegade hitting his stride after years of hard work stealing scenes from stars like Liam Neeson, Tom Hardy and Jason Statham. Grillo sinks every ounce of himself into Alvey, a former fighter who is hanging on to life by investing his time as a trainer and mentor to his sons. Everything about Grillo is authentic and Balasco hangs the show on his shoulders, and the man doesn’t disappoint. You may feel like you know Alvey after a few episodes but by the 9th hour, every picture you have drawn will be tossed because he’s unpredictable and vulnerable in ways most tough guys are not on television.

If Grillo helps shape the soul of the show, Kiele Sanchez(who co-starred with Grillo in The Purge: Anarchy) is the heart of the show as Lisa Prince, Alvey’s woman and Achilles heel. Sanchez isn’t a name you will know before the show, but after you watch episode 10, she will be an actress to remember. Sanchez isn’t intimidated by the male dominated cast. She’s the Queen that nobody wants to push aside. In the same vein as Alvey, viewers will think they have seen Lisa and her arc before as the show opens up innocently, but things soon spiral out of control and that allows Sanchez to have some fun with Lisa. 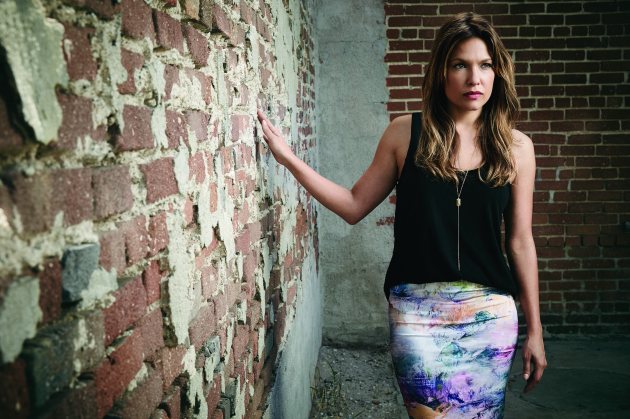 Matt Lauria is a cracked glass of rage as Ryan Wheeler, a former champion who gets released from prison and has to deal with all his demons like they are residents in a house he can’t sell. He reconnects with Alvey, a man he respects but also a man who is with the woman he loves in Lisa. Kingdom does “messy” like no other show. Lauria never lets you get too close to Ryan, a violent man with enough rage to fill six rings of sorrow. This show balances itself on the tripod of lust with Alvey, Ryan and Lisa trading blows hour by hour.

Let me say something. I love Jonathan Tucker. Everything about the actor appeals to me. He has so many speeds the man is like a human treadmill. Comedy. Action. Romance. Wildness. Wacky. Heartfelt. Tragic. Tucker can play them all. I’ve loved Tucker since his work in the short run of NBC’s Black Donnelly’s. He squared off with Timothy Olyphant’s Raylan Givens on Justified earlier this year but his work as Jay Kulina will demolish everything he has stepped foot in before. Tucker unfolds here as a man who has snorted every drug and burned every bridge but seems like the most well adjusted “right where I need to be” person on the show. Tucker is a live firecracker as Jay, a fighter on the comeback trail.

What do you think of Nick Jonas? He sing and girls love him. Well, toss that out the window. Whatever the answer is, prepare to rethink it as he tackles the role of Alvey’s youngest son, Nate. This kid was the last person on my list of “I hope to see him in a physical fighting role sometime soon” but as the moral of the show pertains, forget about pre-conceived notions. Jonas is a quiet ball of fury here as a kid who doesn’t know what he wants but knows that breathing keeps all options open. Nate Kulina is the youngest but he is also the most responsible person on the show. Nick Jonas is going to blow you away and it looks effortless.

Mac Brandt does great work here as the fighter and drug pharmacy to the Kulina family. The “Freckled Dart Board” doesn’t get nearly as much screen time as the majority of the cast but puts it all to good use. He makes you want to see more of him. The wolf has some juice here. Also putting in fine work is Joanna Going, the “wife” and mother of the Kulina boys. You won’t know whether you should love or hate Going’s Christina, but the ride doesn’t stop hitting bumps until the final moments of the Season 1 finale. The trademark of this cast is deception. Right when you measure them for an overhand right located for your forehead, you don’t see the uppercut smashing you in the ribs.

Balasco has crafted a show that looks simple on the surface but breathes like a stoked fire with intensity. The Kulina’s gym, Navy Street, is on the fringe with bills and staying open. Jay and Nate are trying to establish themselves in the fight world and Ryan is reestablishing his ring persona while fighting all the urges outside of it. All the while, Alvey and Lisa seem to fighting the ugliest part of life. Cutting strings with the past and trusting the future. The actors may look gorgeous but their characters are all broken piles of glass. Speaking of glass, Lauria’s rage filled moment at the gym is so harrowing and out of control that I felt like smashing a mirror just to see if I got the same rush. Kingdom makes you want to hit a bag until your knuckles bleed. It’s workout video, graphic novel and poetic speech about identity that you won’t see coming.

Grillo is the bottle cap that’s ready to pop. You watch him and you see an actor who pulls pages of dialogue and looks from his bones. He’s the most authentic fighter you will see on any sized screen in 2015 and beyond. A man who has finally found a role fit for his amount of rage, charisma and stature as a true tough guy with a poker deck full of secrets.

What makes Kingdom different? The visceral punch that it hits you with and the way it defies normal TV family drama. This show is a pit bull with teeth, heart, and soul to make your time spent with it seem justified but required.

As Mac Brandt would say, “show some self respect” and watch Kingdom. Season 2 starts in a week.