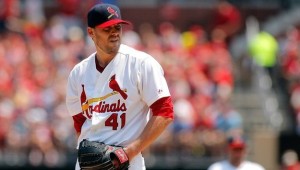 Ask any saloon owner and the last thing you want to do is lose your best cowboy to another town next season. With the way St. Louis Cardinals starter John Lackey is pitching right now, the question remains swirling around my head. Will he come back and pitch for the Birds next year?

The Texan has turned back the clock in 2015, reaching 10 wins for the 12th consecutive season he’s pitched in. He’s more efficient than ever, racking up a 2.87 earned run average and a 1.18 WHIP with 116 strikeouts in 159.2 innings this season. He’s only walked 38 batters. He scatters singles, allows a lot of singles and the occasional home run but for the most part Lackey has stepped into the Chris Carpenter role since he joined the team last July. He’s an angry man on the mound and lets his emotions fly. He commands respect that other pitchers can only dream of. He’s more than just a talented arm. He’s a simple man with a plan who hasn’t added a pitch in years yet remains efficient.

Is it enough to bring him back next year? Sure it is. I just don’t think Lackey will want what the Cardinals offer him. I don’t see John Mozeliak offering a soon to be 37 year old more than a 1 year deal with the fleet of young pitchers coming up through the minor leagues like a locomotive carrying silver bullets into town. Put yourself in Lackey’s position. If you are pitching this well, and doing it for the bargain price of 500,000 dollars(Cards slipped him a bonus at midseason to enhance the earnings), would you accept a lesser deal at this point in your career?

I think Lackey will look for a parachute deal, something to float away into retirement on top of. He won’t go pitch for the Marlins or anything, but other contending teams will pay him good money and guarantee it for 2-3 seasons. I think of the “who comes back” ordeal to center around Jaime Garcia and Lackey. Right now, brittle body or not, Garcia has a better chance of returning simply because he has half the leverage that Lackey does and he needs to prove he can start 25-30 games in a season again.

I’d love to have Lackey stout back for another round of drinks. He’s tough. Once Waino fell down and Lance Lynn struggled a bit early on, Lackey’s role became enhanced this season. With his fine work Saturday night, John Lackey has hurled 12 quality starts in a row, nine of them covering 7 innings or more. He has been one of the most impressive if not the biggest bright spot in the league’s best rotation.

Enjoy him while he’s here folks. Lackey is exactly the guy the Cards need in the postseason, a guy who has closed out two teams on two different teams to win the World Series(including the Cardinals in 2013). As a competitor taking the ball every five days, Lackey is one of the best. As the oldest starting pitcher on the Cards, he’s hanging with these younger guns just fine.

While he may not be a Cardinal past 2015, John Lackey has proven to be worth every penny and then some this season. I think that’s enough to sleep on for Cardinals fans.