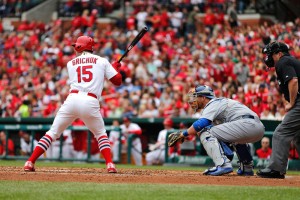 A 23 year old well built baseball player steps to the plate. He waggles the bat, digs his feet in around home plate and dips the bat over his shoulder. The bat slowly points back towards the umpire as if to say, “Watch this!” The pitch comes in, and the body engages like a fighter jet. The bat head springs towards the sky and starts to whip around towards the pitch. It may touch the ball or it may miss it completely. If contact is made, the baseball goes an extremely long way and quick.

Welcome to the Randal Grichuk experience, open 7 days a week in this St. Louis Cardinals lineup. All he does is hit extra base hits and strike out. He’s an action film. An experience. His defense in the outfield(he plays all three positions) is not too shabby but it’s his bat that creates the most attention.

Grichuk has 17 doubles, 6 triples and 11 home runs on the season. You won’t find many players in this league with those kind of extra base hit splits. He’s got speed, loads of pop and can spray a ball to any field. Good luck shifting this kid. He hits a ball off the end of the bat and it looks like a solar eclipse running out of the park from a building across the street.

The knock on Grichuk is that his bat has too many holes in it to sustain success in the majors. Yes, his 33 percent strikeout rate(72 in 216 at bats) does leave questions at the door and will make a person look at the directions to this action figurine a few extra times. However, when you carry this much BOOM in your stick, the setbacks can be handled.

Grichuk is fun for all ages. To young kids, he’s the knight with the big sword, slicing juicy fastballs up. To teens, he’s the young stallion making his dream come true. When he comes up to the plate, my wife stops and watches. Now, that may be due to the fact that Randal isn’t terrible looking and is built like a Ford truck, but also there’s a good chance he may launch a baseball towards outer space and you want to be able to tell your friends where you were when it hit the astronaut in the back. Husbands can’t complain about that. Respect, son!

All I know is Grichuk is holding up quite well, and helping the Cardinals in a time of need. Ever since Albert Pujols left, the Cards lacked a potential 30 home run guy. A show stopper. Soon, Grichuk could be that big stick. While he may not be multi-faceted like Pujols, he is once again, only 23 years old.

One thing Randal Grichuk is these days is exciting. Buy a ticket to this ride sometime soon. See it in person. Where it is going, nobody knows. There’s a decent chance it may get better.

Before the action starts against Atlanta Saturday night, Grichuk has 11 home runs, 36 RBI, and hitting .278. His on base percentage is a respectable .326 and he is slugging out of his mind at .551. His WAR(via Baseball Reference) is a solid 2.1 and growing. He has slowly increased his walks(1 for every 5 strikeouts) but fans don’t want to see the kid keep his bat towards the umpire and still. They want action! Baseballs fear Randal so don’t let them off the hook! As a man once said in an M. Night Shyamalan flick, it hurts not to swing.

With Matt Holliday missing time due to injury and Jon Jay on the decline this season, Randal Grichuk has given the outfield a boost. A breath of fresh air! When I think of an outfield of Holliday, Grichuk and Jason Heyward in 2016 and beyond, a smile appears on my face. It’s a pleasant thought and not far fetched.

Extra note. Grichuk is a reason fans should be patient with Stephen Piscotty. When Randal first got here last summer, he struggled. He whiffed once every other at bat. It looked like a kid swinging at wire brush at the plate. Eventually, he improved and found a timing and comfort at the plate. Look at him now.

Randal Grichuk turns 24 on August 13th so he is just getting warmed up folks. Be sure to attend the next show.