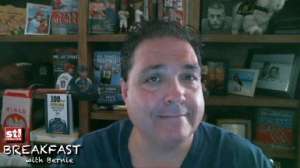 Back when I was a kid, I appreciated the more simple things in life. For me, it was getting up and sprinting to the nearest St. Louis Post Dispatch machine and getting the paper. I went to the machine near Tholozan and Kingshighway. Most days I actually got fully clothed but others I just ran out in what I was in at the time. If they would have timed me on one of my pursuits, I may have challenged a college draft pick for the 40 yard dash.

I needed the paper because I needed to know what local scribe Bernie Miklasz thought about a game, player or upcoming event. As a St. Louis sports fan and prospective writer, he was the guy I looked up to. Every fan has their selective voice and for me, Miklasz was it.

Bernie Miklasz is leaving the Post Dispatch after 26 years of writing print columns, blogging for their STL Today website and producing many podcasts, including Breakfast With Bernie and Best Podcast in Baseball with Cards reporter Derrick Goold. To me, he is the epitome of “tell it like it is and don’t care what others think”. Bernie doesn’t sip the koolaid(unless you put it next to a fine cigar) and prefers to think against type on certain topics. He is a blunt instrument in a world of talking head sports types that are afraid to challenge the status quo.

The man has a few writing moods, like a sports car has gears and speeds. There is direct take Bernie, where he gives a measured take on a popular topic. There’s quick take Bernie, where he takes an event and offers an instant reaction. There’s nostalgic Bernie, like the amazing columns he wrote about his late friend and coach, Rick Majerus a couple years ago. My favorite kind is mad as hell and not taking it anymore Bernie, and you have seen that with a couple of recent pieces on the Rams and the possible move to Los Angeles.

He is an opinion giver, and the best times are the ones where he has to dial it up a notch and put the extra couple of mph on a fastball editorial. As the man said himself in a classic exchange on Twitter last year, “That’s what column writing is. You can write an opinion. You can be subjective. That’s the entire point.” Some people forget that guys like Bernie are paid to be subjective and objective, and simply give their take. That’s what I formed my entire platform of writing on. Having the desire and need to dish my take.

The plan is for Miklasz to join 101 ESPN in a larger capacity, and that includes a three hour radio show and some sort of column writing. Or he could decide to start his own website of content. If Bill Simmons can do it, so can Bernie. I look forward to hearing his voice on the radio.

Some rants are best saved for the radio because people would much rather listen to you than devote all their facilities to a column. Bernie took some time in finding his stride on the airwaves but settled in. Instead of getting three minutes in the morning, he got hours to unleash a fully loaded take. While others didn’t like it, I found Bernie’s radio work to be like the B-side track to his writing.

It was only a few years ago where he anchored the lunch time hour for ESPN before departing to do more writing.  Lately, he has provided guest spots on the network, and my feeling is they wanted the big dog back full time. It’s a good move and I know that because the Baltimore native wouldn’t shift his career without a goal in mind.

When I think of Miklasz and his writing, I think of Batman and Heath Ledger’s immortal words as the Joker in The Dark Knight. The Joker looks straight at Batman while being interrogated and tells him, “You see, you changed things. There’s no going back.”

That’s what Bernie Miklasz did at the Post Dispatch. He changed things, sharpening the edge of commentary and sports forever. Along the way, he gave me a reason to listen to more Bruce Springsteen and enjoy a few different cigars. Every young writer has their inner voice that they measure every word they write against and for me, that was Bernie.

Long may you run my friend. Wherever you are, I’ll be listening, reading and waiting for the next dose. Only these days I won’t run to a machine to get it. I’ll just turn on the radio and relax.