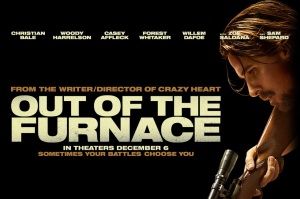 When I exit a movie, I make an attempt to break it out into categories instantly.   Is it worth watching, worth fighting for or simply one you can miss?  Some movies are easier to review than others but more than a few movies are hard to put a rating on.  Letter grade or number style ratings can force a film critic into a room where he isn’t comfortable.  With Out Of The Furnace, I put myself in a predicament.  I liked what I saw.  There were some parts I even liked a lot.  Other parts I was okay with.  In the end, I can easily recommend Scott Cooper’s grim covered blue collar menace filled tale, but it didn’t blow me away like I thought it would.   Let’s break it down into great, good and average parts.

There’s a quiet sense of power that turns more conventional thriller layers of the movie into something more and I lend that credit to director Cooper.  He creates realistic people with his characters and works very well with actors.   You can’t build chemistry in a film school and in this film the ease with which the actors work is evident from the start.  The relationship between Bale and Affleck’s brothers, which is built up slowly over the film’s first half, is genuine and powerful.  This is the best part of the film.  Affleck’s Rodney, a torn apart Iraq soldier trying to make a living at home that doesn’t include giving his life to the mill, where his brother Russell(Bale) works and his father contracted a disease from.  A scene between the brothers where Russell pleads Rodney to get a regular job is punctuated by Affleck’s tenacity he brings to the broken man.

When people speak of Ben Affleck’s recovery with Gone Baby Gone, they forget to mention in that very film Ben helped light a fire under his brother Casey’s career.  Long deemed a comedic sidekick, the younger Affleck has turned in fantastic versatile work and continues that here.  His trek is the heart and soul of the film.  He steals it from Bale, who turns in his usual solid performance as the stoic older brother.  Woody Harrelson chews scenery, in a good way, as the menacing Harlan DeGrote, bringing to the table a man who admits, “I have a problem with everybody.”  Harrelson brings a comic insanity to this bloody fisted baddie and it’s a joy to watch.

The first half of the film is brilliant and award worthy.  The built up relationships, including Russell and his uncle (Shephard) and with his girlfriend (Saldana).  Bale and Saldana share a wonderfully played scene on a bridge that’s a testament to the chemistry between the actors.  An unexpected accident propels the plot and arc of the brothers and the film benefits from it, setting up Rodney in his predicament with Harlan’s underground fight ring up in the mountains.   A scene between Rodney and Harlan sizzles, with Affleck and Harrelson trading verbal shots and you just don’t want it to end.   If there is a redeeming factor about the film, it is the work of a truly fine ensemble cast.

A pivotal plot point unfortunately turns the film into a more conventional thriller and while that is not a bad thing, it certainly takes a little of the power away. Cooper maintains the intensity throughout the finale, but it lacks the poignancy the first half of the film built up with the characters.   What was built up in the first 70 minutes towers over the final third of the film, where more blunt action takes over and resolutions seem a little forced.  The powerful aspect of the film is sacrificed for a neatly wrapped resolution that could have used a little more ambiguity.

All in all, Cooper made a solid film worth checking out.  The unbreakable bonds of family reverberate throughout the film and give it life support when easier routes were presented.   I didn’t leave the film emotionally walloped but that doesn’t necessarily mean the effect of a good film missed me entirely.  The score was well done and effecting as well as the beautiful rustic scenery of the northeast.   As I said, some films are hard to grade because you feel something for them but you just can’t quite put a finger on what it is.  Out Of The Furnace worked as a drama about survival of blue collar families and underground boxing but stood shy of greatness when with the way it wrapped up and the feeling it left you with at the end.