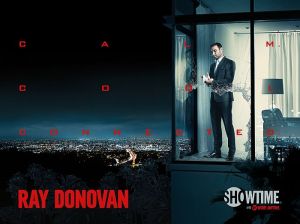 Ann Biderman makes tough guy shows. When a show with her name on it starts, one can expect heavy handed testosterone and convincing action. From NYPD Blue writing to creating Southland to bringing hard nosed fixer Ray Donovan to Showtime, she has delivered a product that is expected to piss vinegar and crank up the macho primal side of men bent by their past and pushed hard by their current conditions. She doesn’t create soft characters or plots. That is why I find it troubling and sad that she is leaving Ray Donovan after this second season. The third season, which starts production next year, will have a new showrunner. Biderman will stay on as a creative consultant but depart for her next tough guy series. There was said to be financial overruns that contributed to the decision.

I am not sure I like this news. To me, the show is at a creative peak after last week’s episode, “Walk This Way”. In one hour, every demon inside the South Boston family of the Donovan’s came home to roost. In a birthday party for the young son Conor, you had drinking, fighting, shouting, cheating and tons of bad history being brought to the table. Star Liev Schreiber directed the episode and delivered some of his best acting in the series to date. Schreiber keeps digging into this role like a boxer digging into his opponent’s body with stiff hooks. The work from Jon Voight, Dash Mihok, Paula Malcomson and others was top notch. The second season has been  because the show is more open to intriguing plot details. The first season was strung around Ray’s raging war against his father, Mickey(Voight, Emmy worthy from the start). This season, the history of the family and outside threats(Hank Azaria’s FBI agent) and internal dysfunction(the sale of the gym) has come front and center. With Biderman departing, I am not sure a new showrunner comes in and sets up shop.

Creative types want to lay their footprint but Ray Donovan is set up right where it is. The show is called simple and short minded by many but what is wrong with an easy going dose of madness. The show has shown lighter moments all season. A Bob Seger cover by Azaria was fantastic. Seeing hard boiled Ray dance with his son to Walk This Way by Aerosmith was the end of the gauntlet run during last week’s intense episode.

The key to the series is Schreiber’s work as Ray. He shows new shades of vulnerability every week and his character continues to grow dramatically. He isn’t a gruff fighter anymore. He is ticking timebomb. Someone who can wreck lives in many ways. The next showrunner needs to keep that going. The supporting cast is nice but the plot devices ride the shoulders of its leading man. Schreiber was born to encounter Ray’s demons, which run from child abuse to cheating to killing. He’s doing some of his best work as Donovan right now, so changing bosses worries me a bit.

Producers Mark Gordon and Bryan Zuriff will stay on as producers while Biderman walks away. She departed Southland before its conclusion so this shouldn’t be too much of a surprise. Banshee fans, think about if Greg Yaitanes left after Season 2. Yaitanes, like Biderman, is closely connected to the series and directed a number of episodes. Remember how bad True Blood got after Alan Ball departed? When Frank Darabont left The Walking Dead, the following season wasn’t good at all.

Changing showrunners is risky business for a series that is thriving. I hope Ray Donovan survives the switch and comes out stronger.