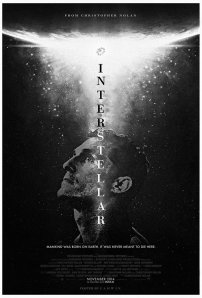 Chris Nolan makes awe inspiring movies. Every time. He doesn’t waste your time or steal your money with his cinematic features. He takes you on a ride that is guaranteed to fill your mind with rapturous movie love glee and get your thinking about how movies should be made. The third(and most likely final) trailer for his latest, Interstellar, is built the way all previews should be built. It offers a tease of the plot, great imagery, powerful dialogue playing over it and an instant need to watch it again and again.

Don’t spend too much time thinking about the plot. It’s 2001: Space Odyssey meets Apollo 13 meets The Abyss. The idea is that earth has become a dangerous place to live and climate control is destroying it. In a way, our planet is dying and a professor/scientist(Michael Caine) devises a plan for a group of scientists(Matthew McConaughey and Anne Hathaway among others) to perform an exercise called “interstellar” in order to “save” it. It involves time travel and perhaps finding another planet that humans can survive on. Remember, there is a lot more going on and many characters in play. The plot is just the first bite of the steak on this delicious looking experience.

That’s what Nolan does every time. He creates a one of a kind experience. Something to watch again and again. Something to tell your kids about when they are ready to explore great films. Nolan’s films always involve plots that require a little leap of belief. A format that denies limitations in the depths of storytelling. He opens a pandora’s box in your soul with his trailers. Remember The Dark Knight trailer? The Inception tease? They had you at hello! That’s Nolan.

This is McConaughey at his best. His dramatic scenes in the trailer with Mackenzie Joy, playing his daughter in the film, are amazing. The line where McConaughey tells Hathaway after she asks him, “Couldn’t you have told her you were going to save the world?” is priceless and speaks for any good parent.

“No. When you have become a parent, one thing becomes pretty clear and that’s that you want your children to feel safe.”

That is the backbone of every Nolan production and story. Family and how it binds people to each other and makes them do dangerous things to protect the sanctity of it. Every film of his has something to do with the depths one will go to in order to get back to his family or protect others.  His stories are about troubled men and how their sacrifice sits close to mankind’s reward.

Dylan Thomas’ writings are read, Jessica Chastain and Casey Affleck show up, and tons of astronaut activity occurs as well. Add it up and these 2 minutes and 33 seconds will just about store itself away in your cerebellum.

Nolan makes movies that are easy on the eyes and blow your mind. 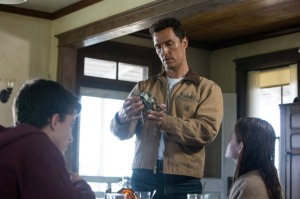 Interstellar comes out on November 7th. That gives you a little over three months to salivate over this trailer.