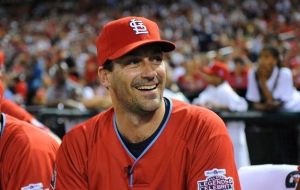 When I first heard the name, Jon Hamm, back in 2005, my first reaction was…”Who is this guy?” I had heard the name many times over the course of a few weeks.  I was sitting at Panera in Florissant and was throwing down a sandwich and reading the New York Magazine article about this hot new show called Mad Men.  Flash forward to today and I am one of his biggest fans and developed a fully equipped man crush on the St. Louis native TV/Movie/Local star. After reading that article, I quickly got a hold of Mad Men, watched the first season, and became addicted to this show about tortured souls in the 1960’s hiding their true identities, selling advertising, and drinking and smoking way too much. At the center of that addiction was a man named Hamm.

He is the heart and soul of the show, which just finished airing the first part of its 7th final season. In a way, he is the heart and soul of the entertainment community of St. Louis. Hamm is an avid Cardinals and Blues fan, and doesn’t hesitate to show his love for IMOS pizza. Every time he goes on Jimmy Kimmel(a well known hater of the St. Louis style pizza), Hamm brings him an IMOS pizza. That’s Hamm. He is synonymous with this city.  If it’s him wearing his beat up Blues and Cardinals hat in Los Angeles or on the set of Million Dollar Arm(his solid leading role vehicle released last month) or him simply talking about the Cardinals in the latest issue of Vanity Fair, Hamm is always going to carry the Midwest around with him. 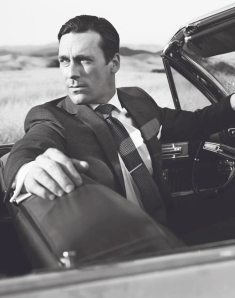 With the departure of David Freese to Los Angeles, the LA based Hamm takes over as the face of the city.

Hamm will officially get his day at Busch Stadium on August 18th, when the Cardinals promote Jon Hamm Bobble Head Day. That’s right. This prodigy son is getting his day in the sun right here in St. Louis. Excuse me if readjust to hide the boner beneath this keyboard. When I heard about Hamm Bobble Head Night, I had to come here to the Dose and fire something up. Whether I attend the game, climb up the side of the stadium or parachute into the stadium, I will acquire this item and proudly display it in my house. For me, Jon Hamm connects the two things I love most in life(outside of my family of course). The St. Louis Cardinals and The Land of Make Believe, the movies and TV shows. Hamm brings those two together.  That could be where the love comes from.

Hamm will attend the game and throw out the first pitch. I am sure he will think about firing a fastball down the middle with some heat behind it but I am guessing a direct shot to the catcher’s chest with a nice hang to it will do. This will definitely be an event worth checking out. This relationship between Hamm, the Cardinals, and this city will only grow as Hamm’s movie career stretches its legs. The city needs a good representative in Hollywood and Hamm fits the bill.

It doesn’t hurt that he is a good actor and likes to be a part of ensembles. While Million Dollar Arm didn’t gross a ton of money, it was an enjoyable summer dose of true baseball story mania. Hamm anchors Mad Men because his restrained deeply emotional performance as Don Draper makes the show run so smoothly and brilliantly. Hamm has quietly put together a fine movie career before this summer. He shared the screen with Ben Affleck in The Town, had a small role in Bridesmaids and is slowly breaking out. He has guest starred on 30 Rock and hosted Saturday Night Live a few times. His comic timing is as sharp as his throw from third base in the Celebrity softball game before every MLB All Star Game. Hamm has the talent to back up the reputation.

Check out his hilarious bit as Lex Luthor asking the President for a bailout.

"Lex Luthor Bailout" with Jon Hamm from Funny Or Die