If you watch and love boxing, you know it’s an emotional sport unlike any other. A person steps into the ring with the intent of hurting another man and it’s a brutal practice 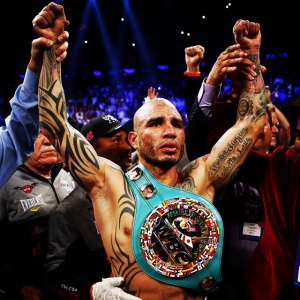 and way of life. Your knees, jaw, and legs give out at some point and your will starts to follow suit. Watching it makes you feel as if you are in that ring with the fighters and throwing and taking punches. Football and hockey are physical sports, but boxing is a blunt old fashioned way of demoralizing someone’s spirit. In the words of HBO commentator Jim Lampley, “You don’t play boxing. You fight.” That’s it. Before looking at the amazing Miguel Cotto victory over Sergio Martinez on Saturday night at Madison Square Garden in New York City, let’s look at Cotto and how he got here.

Miguel Cotto is a one of the most respected fighters in the sport of boxing. He’s a proud Puerta Rican student of the sweet science and a man who can do damage to another in the ring with tactics built around years of training. He has four losses in his career and all have come against the best, with one omitted(in my mind) because a fighter used an illegal substance on his gloves.

That is the fight that is required when discussing Cotto’s career. He faced a dirty fighter in Antonio Margarito years ago in a fight that shaped his boxing life in a horrible way. In the fight, Margarito used illegal hand wraps that were discovered in pictures after the fight. When a fighter’s hand is wrapped, several layers of gauze and tape are applied to produce a pad on the knuckles. Water or any other substance isn’t allowed. Margarito pummeled Cotto in a brutal fight in 2008 due to the application of plaster like pads inside the tape on his hands. This substance was found before Margarito’s next fight against Shane Mosley, and Mosley promptly destroyed Margarito. Cotto avenged the fight a few years later in beating Margarito himself, but in my mind the 2008 damage lingered. In boxing, a bad fight can stick with a guy and Cotto was unable to cut this loss loose in his head. Before the fight, Cotto was undefeated and unstoppable. Margarito took that away from him that night and even when Cotto regained it during the rematch, something still wasn’t complete. Cotto lost to Manny Pacquiao, Floyd Mayweather Jr. and Austin Trout as well, all seasoned good to great fighters. However, the Margarito loss seemed to weigh on Cotto’s psyche for years. You don’t take a beating like that and shed it with a couple wins and good fights. For a more in depth look at Margarito’s foolhardy acts(for which he was stripped of his license), check out Thomas Hauser’s piece right here.

When Cotto switched to Freddie Roach, a Hall of Fame caliber trainer, after the Trout loss, something started to change in the boxer. Call it a way of life or boxing style but Roach had an impact on Cotto.  I usually don’t put too much stock in trainers because once training stops and the fight begins, a boxer only has himself to truly take through a fight. Roach is different. He connects with his fighters on an emotional and professional level. He notices strengths and defeats their weaknesses. Cotto had abandoned his left hook in his recent fights, and when he took to the ring against the overmatched Delvin Rodriguez in 2013, the fight ended in three rounds due to a devastating left hook that gave Cotto a technical knockout.

Instead of picking Canelo Alvarez for his next fight, Cotto picked seasoned veteran Sergio Martinez, a great boxer with 51 wins and only 2 losses, one coming in controversial fashion against Paul Williams. Martinez was a good pick because fight fans needed to see just how much Roach had taught Cotto and what kind of future Miguel had in the sport. Martinez needed the fight too because of doubts about his own health and status.

It turns out that Roach didn’t just acquire the best parts of Cotto and put them to use but he simply allowed Miguel to leave that damaging Margarito loss in the past and become a new fighter. Instead of being a boxer who had to fight 7-8 tough rounds and try to out slug opponents, Cotto was a master of the sweet science again, attacking opponents with a variety of weapons.

Martinez had no chance. The speed in his legs was gone due to a few rounds of surgery and Cotto attacked Martinez aggressively in the first round. When he is right, Cotto attacks a guy with left hooks to the body and stiff jabs to the head. He knocked Sergio down 3 times in the first round and again later in the fight. Before the fight ended in the 10th round, Cotto had won every single round on all three judges scorecards.  Miguel Cotto didn’t just beat a boxer last night. He demolished Sergio Martinez and probably put an end to any real victory Sergio will have in boxing for the rest of his career.

Two men climbed into the ring at the Garden Saturday night and only one was going to leave with their dignity and career in check. Cotto and Martinez were older lions trying to stick around for a few more matches. Cotto took away Sergio’s boxing life and rediscovered his own.

Miguel Cotto is an easy boxer to love. He’s proud, humble and soft spoken. He speaks like a methodical gunslinger in the old west but he puts family and respect first instead of trash talk and mindless activity. He keeps his enemies close but his family closest. Next to Pacquiao, I don’t have a better boxer on my favorites list. Cotto is the real deal.

His future is wide open. He can go after a rematch with Floyd Mayweather Jr., a man he hurt and bloodied in a respectable loss two years ago. He can take on Canelo Alvarez in a mega fight that will sure dazzle and amaze. Cotto can also return to another loss and take on Manny but that is highly unlikely with Roach serving as both fighter’s trainers. The clear cut idea is Miguel has options that he didn’t have last winter before the Delvin Rodriguez fight. Many thought he was declining and was unable of a real comeback. Beating Sergio, declining knee or not, isn’t something to take lightly. Martinez is more than capable of beating a less than sharp Cotto, but found no room to breathe Saturday. Take away the knockdowns. It was the easy jabs that Cotto fired. The hooks. The confidence in the ring.

It’s hard to not be romantic and emotional about boxing. In a sport that lays so much on the line, the weight of devotion will follow any fan around. Miguel Cotto didn’t just win a title Saturday. He quieted the doubt, shut up the naysayers and opened a new chapter in his career. He shut down and stopped Sergio Martinez in a fight many picked him to lose. In one great win, Miguel Cotto took back his life. It’s always nice to see a good guy win.