When the Cardinals home opener rolls around, one thing instantly comes to my mind. My good friend Troy Siade. Troy and I met while working the Manual Scoreboard

around 2002 and instantly hit it off. If hitting it off meant giving each other as much shit and trouble as we could. Two peas in a pod on a versatile group of scoreboard degenerates getting paid to watch baseball games, Troy and I were alike in many ways. We were loud, blunt, dirty and diehard Cardinal fans. When we weren’t scaring scoreboard visitors with our vicious ice cube battles or firing insults in each other’s direction, we were hanging shoulder to shoulder watching the game talking about the action. Troy was a joker on the surface, but deep down he was one of the best guys I have ever come to know on this earth. He was caring, devoted and modest behind all the loud talking exterior. The reason I think about Troy so much on opening day here in St. Louis is because 10 years ago, on April 23rd, Troy passed away at the age of 38 to Non-Hodgkin’s Lymphoma. The last time I saw him was on opening day earlier that month.

Troy was a good looking guy. Full head of dark hair, huge smile, big laugh and a walk that even the proudest gangster would fail to imitate. When Troy lived, he was on top of the world. We were living inside his movie set. He called the shots, told the jokes and made us laugh all night long. When the Cards blew a game late, he would shout and pace the scoreboard like a mad professor looking for the new theory of relativity. I remember a car drive with him that involved a massive thunderstorm and Troy slamming on the steering wheel extremely hard because he wanted to get back to his house so he could show off his home to another scoreboard friend and myself. Troy was an entertainer at all times. Part of the reason I miss him to this day has everything to do with need and less to do with baseball. Troy had an energy. A will to pull a smile out of a dark corner or take the mood of a room and toss it through the ceiling. When you work 70-75 games of a 82 game home schedule, there can be some dull nights. If Troy was there, the forecast called for a good time no matter what the score turned out to be.

Being the outgoing personality that he was, Troy was able to keep certain things private. Many of the scoreboard guys didn’t even know he had an illness or disease until a year before he passed. He didn’t want us to know. The comedian doesn’t let the curtain fall to show it all. Troy only let us know when he was getting very seriously ill. Cancer can be a deadly quick moving disease. It can come in and smash everything within months. Troy was here, alive and well, towards the winter and end of a rather forgettable 2003 season that saw no playoffs and a horrible September series in Wrigley that had Troy and I ranting for an entire homestand. Troy was okay then. By the beginning of the 2004 season, he was nearly gone.

There are two moments I will never forget with Troy. Okay, three. I will warn you they start happy and end sadder than shit.

The first was that stormy night back in the summer of 2003 he invited me and a friend back to his home to play pool, sit in his Busch Stadium terrace reserved seats he had installed in his basement

and listened to rock n’ roll while drinking like fishes. The Cards beat the Orioles 8-5 with an Albert Pujols three run bomb. We crashed at Troy’s and went to the ballpark the next day. It was perfectly Vegas behavior. It was a night I will never forget.

The second was a random day where Troy showed up at my apartment and asked my wife and I to dinner spur of the moment. He had just left work, suit and tie on, and wanted to take us out. He cared like that. He hung out with people he liked and loved. My wife got a kick out of him and we really wanted to go. In a decision I will regret to the day I die, I turned Troy down. We had plans with my parents to go to dinner. Plans I should have broke. Plans I should have shredded. I will never forget the look in his face when I said we couldn’t. Whether they admit it or not, a light does flicker out in someone’s eyes when they are let down. He reached out and I said no. I hate that move to this day. My first back in time fix job.

The third was seeing him for the last time. It was opening day, 2004, about three weeks before he passed. He didn’t want ANYONE coming to see him. Especially the ones he knew and liked. He didn’t want us to see him in a weakened state. I didn’t follow those orders. I went down to the field box level and saw him. His flock of hair was gone. His smile was flexing yet fading. He was slowly leaving. I shook his hand and gave him a brief hug. I don’t remember how I departed or if I shed a tear. Maybe I don’t want to remember all of it. It was tough.

Troy’s battle with cancer is why I look at what Jason Motte is doing and smile. Every time he meets somebody, raises money, gathers resources, I install a hope in my system some day cancer will have a cure. Cancer deserves a cure. Everybody who has lost a loved one to the disease can attest to that. This disease needs to have its ass kicked. Sooner rather than later. The longer we let cancer linger the more people like Troy won’t live a full life. Death is a kick to the chest and another one while we are on the ground. It’s brutal, final and shocking. Every time the Cards win dramatically, I want to talk to Troy about it. Then I realize I can’t do that. That moment just sucks.

There is a fourth moment so bear with me. Short. We spread a portion of Troy’s ashes around center field at the old Busch because his favorite player, by far, was Jimmy Edmonds. That was a sad day. The entire scoreboard crew were dragging their hearts around the stadium that day.

Every opening day I think about Troy. It’s a bittersweet day for me. However, it is a good day to remember him and how great of a person he was. 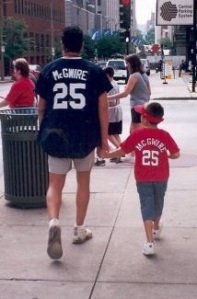 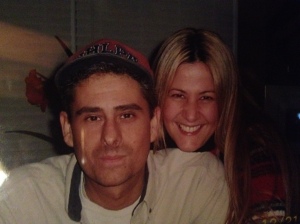