Welcome to the latest round of A Dose of Buffa At The Movies. Let me start things out with a new release in theaters, Sabotage.

Let me first say that I walked into this film with a certain level of expectations. David Ayer, the co-writer/director had just put out the amazing cop film End Of Watch and hit a personal

career high mark. When he sought out Arnold Schwarzenegger for this role in this deadly DEA agent corruption saga, I got a good vibe. This wasn’t going to be your typical Arnold action film. There was a chance it could be something more. Good cast and a fine looking trailer came around and the expectations were built. I wanted something special. What I got was a letdown and a film that relied too heavily on gory action and not enough on its story. Here is a more detailed reason why Sabotage isn’t worth your hard earned money in the theater.

PLOT-Arnold leads a DEA task force of mercenary like killers into this seize of a drug cartel’s cash and when 10 million goes missing, the team tries to seek out the mole responsible and begin getting killed off one at a time.

REVIEW-Sabotage isn’t a total mess but it is definitely a disappointing film from Ayer, who is white hot right now off the success of his gritty brilliant cop film End of Watch. Whether he likes it or not, the bar was raised for any film involving him, especially one with him behind the director’s chair again. This isn’t a blue balls bonanza where you get really high on the film before a monstrous letdown but the wheels do slowly come off in the second half of the film after the beginning is strongly built on intensity.

When I thought it could be something more the film turned out to be a brainless action film. The action scenes are tactical and realistic. In your face bloody and well executed. They are a true highlight of the film in the beginning until they become an exercise in overkill as the wrap up begins and the reveal of the source of the betrayal is made.

The film falls apart in the end due to a series of twists that just don’t add up. That’s too bad because the action sequences are shot with a visceral abandon and amp up the tension. Ayer takes a page from Michael Mann’s book here and allows every bullet fired and explosive set off to feel like its happening right next to us. Its a shame the story couldn’t pack the same punch.

When you do find out who the mastermind behind the corruption is, it’s a head shake and not amazement. Something seems tacked on in the end and it kills the whole film.  The story when viewed as a whole doesn’t sit well. Ayer and Skip Woods fumbled it. While they were impressive in their sales pitch, they seem to lose touch of it all as they tried to figure out a way to complete the plot. In the end, it was…wait for it…sabotage.

Arnold Schwarzenegger shows that he still has the ability to carry a film and kick ass at an older age. He stretches a bit here and doesn’t look bad doing it. The one thing Arnold has that Stallone doesn’t is an ability to be honest with the aging process and allow the wear and tear on his body and face to help his performances. Something is right with the world when Arnold is chewing on a cigar while delivering a one liner or shooting a machine gun from the back of a moving truck.   He isn’t the problem here and fits rather nicely into Ayer’s twisted world.

Sam Worthington(Avatar, The Debt) and Terrence Howard(Iron Man, Hustle and Flow) aren’t bad yet carry on with thankless roles with no real direction. They deserve better. Big Joe Manganiello(Magic Mike, True Blood) doesn’t get much to play with here but shows the usual presence and authority. Mirelle Enos(The Killing, Big Love) shows a completely different side here and has the most fun. Playing a drugged up DEA agent with a hand of cards that isn’t easy to read, the usual stoic and serious actress gets down and dirty. It’s something I wish the whole film could do. The rest of the story and characters are so seriously played that it dulls the experience.

In a way we are in the same seat as Olivia Williams’ cop, who exists as the moral center of the story. Like her, we are seduced by Arnold’s character yet duped continuously as we try to keep up with Ayer’s tale.

In the end, Sabotage sucks you in with the action yet lets you down with its story. Ayer raised the bar with 2012’s End Of Watch, a film that sat atop my top ten list. Expectations are raised when this occurs and more is expected. When a director produces a cop film to remember he can no longer waste people’s time. He went from good writer to crafty blunt filmmaker in one dose. Here, he delivers a corrupt cop tale that simply lacks bite.

*In smaller doses, here are a couple quick Redbox reviews.

Last Vegas-This comedy was rightly saved for the 1.30 bin at Schnucks. That isn’t to say that the Michael Douglas-Robert DeNiro-Kevin Kline-Morgan Freeman starring Hangover styled tale doesn’t work at all. It’s just better off consumed at home with the shoes and pressure off. There are laughs to be had about older age and bad tans. Douglas and DeNiro don’t stretch themselves too far while Freeman and Kline are absolutely hilarious and have fun with their film personas. There’s a tidy ending that could seen from 60 miles away and it doesn’t hurt the overall product. If you want a good laugh and like the cast, pick this film out and have a laugh. 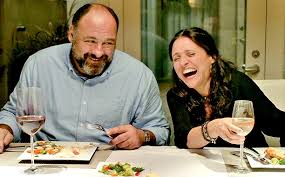 Enough Said-This film didn’t sit well with me as a whole in the end but I liked the lead performers chemistry between Julia-Louis Dreyfus and James Gandolfini. They worked but the story didn’t. First, it’s bittersweet and quite beautiful to watch Gandolfini step outside his comfort zone here and play the ultimate teddy bear romantic lead. I am a big fan of his work on Sopranos and as an excellent actor across the board in different films and roles. He is very good here and that makes you sad because his heart couldn’t keep up with his energy and gave out. I am not a Seinfeld fan yet didn’t mind Julia here. She was funny and honest in her lead role. The supporting cast of Catherine Keener, Toni Collette and Tavi Gavinson is game and good as well.

Writer-Director Nicole Holofcener doesn’t make a bad movie here but it’s too predictable and clear cut from the outset. We know that Dreyfus is learning details unknowingly about Gandolfini from her new friend Keener, and there is going to be a blowup. When it happens, it doesn’t have the huge impact and the story predictable rebounds. Small things aren’t as well done as the director probably intended. There is a classy vibe to the film and that doesn’t hurt it but when the end came and went, I once shrugged and didn’t keep my chin up. The acting is good in the film but the tacky story setup doesn’t have the same bluntness that the dialogue has. There are some brutally honest lines here yet in the end that’s forfeited for sap. A little disappointed. However, it’s not worth 8 dollars at the theater but may be worth a 1.30 spin on Redbox if the mood is right.