It is that time of year where NHL trade rumors hit the highway and start to move at remarkable speeds, confounding fans and whipping teams’ faithful units into agitated frenzies.  Some say it’s good for fans to mix it up in the heat of the battle while others complain about blood pressures hitting the roof.   I prefer to observe, show restraint and wait  for the actual suits to make things happen.   With that said, I think we can still circle the situation and present our take.  Being faithful supporters of the St. Louis Blues, we owe ourselves that much.  So let’s look at it.

The million dollar question is quite simple.   Do the St. Louis Blues need to make a serious play for Buffalo Sabres goalie Ryan Miller?  The two parties have circled each 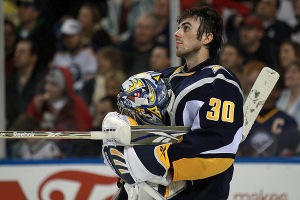 other like attractive parties at a ballroom dance session for years, so the hype isn’t premature.  Buffalo and St. Louis have talked about this before and part of me suggests Doug Armstrong had played out many scenarios in his head of how this could go down.  Let me weigh in here with my decent amount of knowledge on hockey and the Blues needs.

First, let me state that I am not completely for the deal or entirely against it.   I stand in the middle, contemplating each play here as the days pass.   My belief is that Jaro Halak and Brian Elliot are each pretty good goaltenders and make a solid duo but may not be able to stand alone during a time of need.   Neither has shown over a decent amount of time that they can handle the #1 job but have very solid stats to back up their cases.   If I had to choose one for the playoff run, I would stand with Halak.  It can’t be forgotten what he did in Montreal in 2010 during the playoffs.  He earned the 4 year deal with the Blues by playing that well in place of Carey Price.   Elliot can play well for a certain period of time but has come up short in back to back playoff appearances against the Blues new nemesis, the Los Angeles Kings.  Part of that was a result of overall team letdown, but Elliot self destructed when the rest of the team needed him to stand on his head.

The Blues also have a hot rookie waiting down with the Chicago Wolves, in Jake Allen.   About this time last year, Halak went down with an injury and Elliot self destructed during the season and Allen stepped into the net for the Blues.  For the better part of February, Allen was amazing in net, showing the hunger and ability that created the possibility that the Blues had in their own system a true #1 goaltender.

Allen is the biggest reason I think Ryan Miller isn’t needed.  I can see Halak or Elliot being moved before the deadline for talent, but I am not sure we need another goaltender.  If you have two pretty good goalies on your roster and another potential franchise stopper in your minor league system who got a taste of NHL action last season, why trade away valuable pieces for Miller?   Buffalo isn’t going to hand their premiere goalie away without prying draft picks, good established players and possibly the IMOS Pizza franchise from St. Louis.  In the immortal words of Timothy Olyphant in the underrated film Girl Next Door, “Is the juice worth the squeeze” here?

It’s hard to take Halak/Elliot stats and sit them next to Miller’s because of the difference in the team’s records so why bother.   Halak is solid when he is healthy and Elliot has been a very stable backup.  Looking at their numbers, while taking into account the Blues strong defense, it’s hard to not be impressed.  Halak has a save percentage of .912 with a 2.30 G.A.A. and Elliot is 13-4 with a 2.06 G.A.A. and both have 3 shutouts.   Goals against average is dependent on the defense in front of you and a game to game of action but there have been nights where the Blues defense has broken down and Halak/Elliot have faced 30 plus shots.   Comparing the numbers while taking into account the different teams, one can ask why the hell are the Blues looking so closely at Miller.

The Blues may need a #2 or #3 line center or a passing partner for Vladimir Tarasenko(currently white hot and needing someone to tango with on the ice) more than a high priced goaltender like Miller.   Since Allen is in the wings, do we need Miller if our current duo fails to deliver?   Questions abound a Blues team with 35 wins going into tomorrow’s nights game against New Jersey at home.   A previous game with the Devils last week could be why these goalie rumors are sparking high tonight.   Elliot started and got ripped for 3 goals and Halak entered to get ripped for 4 more goals.   However, the Blues defense was atrocious that night and failed to show up against a bad team.  Still, games go on record and stay in people’s minds.

I do know the Blues need a #1 goalie to make it into the Stanley Cup Finals.   It is a rarity that hockey teams ride 2 goalies through the rugged terrain of the playoffs.   When April comes and it’s time to settle on a lone knight to carry the team through grueling stretches of play, who do you choose right now?  Halak or Elliot?  Is Allen the answer?  If it is the young gun, he needs to get up to the team soon and start getting NHL action under his belt again.   If that happens, who do you trade?  Halak is in his final year and Elliot has one year left.

I understand the fans clamoring for a guy like Miller.   He is the proud most popular USA goaltender out there.  Until Sidney Crosby crashed our country’s heroic party in the 2010 Olympics, Miller was carrying our team to the Gold Medal.   He is a great goaltender on a bad team.    He is expensive.  He will command 6 million a year at least.  In order to make the trade worth it, Armstrong will want to lock him up.    Miller is getting old and goalies age like boxers do but has remarkably endured the wear and tear of a starting goalie into the latter stages of his career.   He isn’t injury prone and would love to play for a Blues team that doesn’t have a problem scoring goals and can usually put up sound defense.

Miller may be able to make more game saving stops in close games and be something more than our current set of goalies.    “May” is the key word there and how much is Armstrong willing to wager on that possibility?   Does he make another move and call up Allen instead?   So many ideas.

Like I said, I understand the calling for Miller.   Tom Stillman is trying to generate revenue for a franchise in need of worldwide acclaim.   Securing a player like Ryan Miller could help that fight.   Sellouts may start to increase with a big time All Star goalie like Miller.  Non die hard fans may flock to the Scottrade Center.   For better or worse, the Blues don’t have a well known premier goal scoring threat(sorry Alex Steen) or a big time defenseman that drags even non fans out too the rink.   Could Miller be the guy that stuffs 20,000 into the Scottrade Center every home game?   Is he the final piece to the Stanley Cup puzzle?

If I had a crystal ball I would stare into it right now and see if we were partying on Clark in June.    That isn’t possible, so logic must be used with this Ryan Miller sweepstakes.  What kind of logic is the real question?   The logic of potentially raising the profile of your team as a league wide commodity and a playoff force.   Or do you look at the other logic that Miller isn’t exactly what this team needs.    If we didn’t have Jake Allen, I would be more for this trade than I am right now.

Quite honestly, I see it both ways.   I see arguments for each side.   If I was pushed to pick, I would say stick with what you got, make another trade.   However, I can see the white hot allure of what Miller can bring to this team, the city and the future.

This much I know for certain.  Doug Armstrong is a smart man.   He knows the salary cap.  He knows what the Blues can do and can’t do.  He is a sharp general manager.  I stand by his decision here.

What is your take on Ryan Miller mania?  Tell me in the comments section below or reach me at @buffa82 on Twitter.  Thanks for reading and Go Blues!

2 Replies to “Is Ryan Miller Worth The Squeeze?”