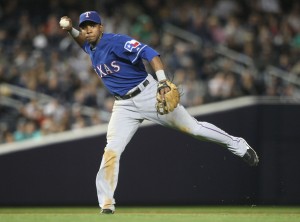 By now, you get it.  The Cards are looking for a long term answer at shortstop that could bolster their lineup and maintain their habit of defensively strengthened infield units. Unless you have been harboring yourself under a rock with Walter White and Breaking Bad’s 6o + episodes, there’s a fair chance you have heard about this.  I am going to tell you why Elvis Andrus is a great fit for the St. Louis Cardinals.

I wrote last week about the idea of Troy Tulowitzki becoming a St. Louis Cardinal.  However, anyone who plays monopoly knows that getting Tulo would put a mighty fine dent in our young player pool and hinge a 7 year, 134 million dollar salary on a team that doesn’t like to carry too much weight on the plane.  That’s exactly why I called it the Idea of Tulowitzki.  People ran at me afterwards thinking I was telling the Cards to do whatever it took to march this man down the Mississippi River immediately.   Offer up a part of the Ballpark Village stock and get him here.   Let him co-sign the Imos name and put him in red.   Trade his mountains for our Arch.  Name a few streets after him, right???….

NO.  I was merely saying it was worth looking into and I would support it.   So let’s move on and let the suits ponder that dreamy proposition.   If you ask me today or even next month who I want the Cards to chase down in a trade this winter, my guy is Elvis Andrus.   The Texas Rangers shortstop is under control until 2022, but he can opt out after 2018 or 2019.    That’s at least five years at a relatively modest salary.   He will make 6.75 million in 2014.  Then he makes 15 million for the next four years.   If he doesn’t opt out, the total cost of his Rangers negotiated extension is 8 years and 120 million.   For a fine shortstop, that’s not a bad price.   Andrus is 4 years younger than Tulo, is not injury prone and comes at a cheaper price.   Andrus is attractive and would work very well in St. Louis for a number of reasons.

Consider the positives.   Andrus would immediately alter the look of the Cards lineup.  He slides in perfectly into the #2 hole and gives you a newfound boost of speed on the bases.   He stole 42 bases in 2013 and has average about 31 in his five year career.   In an offensive down year by many analysts, Andrus still collected 168 hits, scored 91 runs and hit .271 with 67 RBI.  Over his last 5 seasons, per Bernie Miklasz, his 16 wins above replacement trails only Tulo and Hanley Rameriz.   Andrus is a two time all star who is still awaiting his true breakout season.   A young, speedy fine defensive shortstop.   We got a taste of his ability in the 2011 World Series.  Andrus can take over a game.   Imagine him and Wong in this lineup with their speed and base stealing ability.  The Cards offense would change overnight.

What cost?  Texas is looking for a power bat to play first base and hit DH.   Matt Adams is going to fall into this discussion and I would be able to part with him.  Allen Craig is another story.  He would be hard to give up because he is such a proven cost effective run producer.  On one leg, look at what he did in the World Series.   Adams, however, had a great rookie season that saw time off the bench and filling in at first base.  In under 300 at bats, he stroked 17 home runs and collected 51 RBI. He began to get solved by pitching in the playoffs but is very young and also cost effective.   However, you have to give up something sweet in order to get a fine piece of pie.

What else?   Texas are stocked on young pitching but would pull a few known quality arms off our heap.  They may want a reliever/starter type like Kevin Siegrist.  I would part with him.  They could a proven starter like Lance Lynn or Joe Kelly.  They also may want Shelby Miller or Carlos Martinez.    Young lefthanded prospect Marco Gonzales is probably off limits because he is the leftie of the future and someone I am sure Mo would hold onto.   Which one is more expendable out of Carlos and Shelby?

In my eyes, due to his versatility and untouched ability, Carlos Martinez is the one you hold onto tighter.   What if Miller can’t develop a fine secondary pitch?  He was very good in 2013 but hitters started to hit him in September.   He throws a lot of pitches.  The Cards shut him down basically in the playoffs.  Please don’t tell me he was a long reliever because I will laugh at you.   Miller could develop into a Max Scherzer type one day but he needs a couple more pitches to meet that mark.   I don’t want to part with either Miller or Martinez but in my eyes right now, Miller is more expendable.

Texas may want other players.   Look for a package of Adams, Lynn and Siegrist and maybe another prospect.    For a player like Elvis Andrus I would make that trade.  When it comes to losing pitchers, remember the current scouting team of the Cards won’t suddenly just start drafting badly.   John Mozeliak and his team have turned the Cardinals farm system into a well oiled machine that could run for years.  Guys like Gonzales, Lee Stoppelman, Tim Cooney and other young guns will be coming up soon.  Please don’t think the line ends with Wacha and Martinez because I assure you it does not.

Elvis Andrus has the defensive flair that Jed Lowrie does not.   He isn’t as injury prone or expensive as Tulo.   He is a better overall option than J.J. Hardy because he brings a speed element that has been missing from this team for decades.  He hit better on the road than at hitter friendly Rangers Park in Arlington(.293 in 2013).  He hits lefties and righties equally well.  His strongest hitting months in 2013 came in the past 2 months, when he hit .303 and .313 and stole 18 of his 42 bases.  Andrus is cost controlled, young and has his best years still ahead him even though sitting as a two time All Star at the moment.  Something about him just feels right, safe and exciting.   Sure, he could get hurt and miss time.  Every player can.   The sweet isn’t as sweet without the bitter in life and that applies in every sports transaction.

Are there other good options out there besides Andrus?  Sure there are.  Are there better overall options for the Cardinals when it comes to price in dollars and players? In my opinion, there are not.  Elvis Andrus is the man I want wearing Cardinal Red at shortstop in 2014 and beyond.

What is your take?  Respond with thoughts and inquiries to my email, buffa82@gmail.com or find me on Twitter at my handle, @buffa82.

Thanks for reading this.