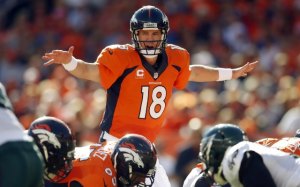 The people that don’t like Peyton Manning are usually people that don’t like the perfect athlete he resembles.  A guy who can dish it straight in interviews, play very well on a football field, admit his mistakes, take losing well, and put out some hilarious commercials in his downtime.  He does it all very well and doesn’t come off like a boring robot like Tom Brady.  Manning is interesting and before he steps on a football field, some people hate that.   I have always liked him, cheered for him and gotten a kick out of his TV spots.  That’s the difference.  I see him as a great football player who has had his ups and downs, won a ring and is looking to win more.  To me, he is better than ever these days than he ever was in Indianapolis with the Colts.  With the tag of being one of the greats, nobody has handled it better than Peyton.  He happens to have the off the field respect and personality image going for him as well.   It’s hard not to like if you ask me.

Last night, Manning rolled right along and helped his Broncos beat the Kansas City Chiefs 27-17 and hand that mighty defense its first loss.  Manning was solid if not spectacular.  He completed 60 percent of his passes and threw a 70 yard bomb.  He threw a touchdown, zero interceptions but lost a fumble.  That will get the critics rolling in a small area picking apart his performance.   When I think of Peyton, I think of Yadi Molina on a football field.   A coach and player inside one body out there calling plays and making them happen.   He doesn’t make excuses or point fingers.   After the game tonight, Peyton will say he played well, not feel the need to thank the lord but credit the prep, his teammates and the coaching staff.  He deflects attention when he could command it like Ron Burgundy.   Once again, Manning helped his team take down a very good team and win on Sunday.  The Broncos and Chiefs are both 9-1.

So many people complain about Peyton’s arm strength.  It doesn’t take a anatomy and physiology major to notice the man has lost a little steam on his fastball.   He has had four neck surgeries.   He will never be the same as he was in his hey day in Indianapolis.  It’s just not medically possible.   However, Peyton has made up for his physical shortcomings by using that big all important muscle up above.  The brain.   He doesn’t need to throw every pass hard.  He just needs to be accurate.  As long as his receivers know where to go, the pass will get there.   Why focus on his arm strength when it isn’t required in the offense he calls?   Some guys in the NFL have to throw hard to get the pass where it needs to be.    The Broncos and Peyton(I refuse to give much credit to their offensive coordinator, because that is essentially Peyton himself) have devised a plan to shred defenses without throwing lasers across the field.

Last week against the Chargers in San Diego, Manning completed 70 percent of his passes and threw 4 touchdowns.  He threw 3 interceptions against Washington the week before but threw 4 touchdowns and helped the Broncos demolish the Redskins by completing 68 percent of his 44 passes.   There’s an artform to Manning’s new found tenure with the Broncos.  Do everything you can do and leave the rest to the defense and critics.    Critics in the past loved to blame the loss of Peyton’s team on him and forget the rest of the team plays too and Manning can’t play cornerback.  That’s easy fodder for discussion but forgets the greatest story.  Manning’s comeback with the Broncos.

I understood why the Colts cut him loose.  I just didn’t agree with it.  Now, seeing Andrew Luck’s success may cause you to question my logic but hear me out.   Peyton led the Colts to the promise land once and was on the door step many times.  While he had a lot of surgery done to his neck, I think he was owed a year to prove he could come back and be effective without the arm strength.  Then the Colts selected Luck and then he was awesome.   Manning was kind of left for dead by many critics.   Many thought he simply couldn’t come back from the 4th surgery at his age.  In my eyes, he has defied that theory and proven to be as sharp if not sharper with Denver.  It’s an amazing transformation in his career that I believe will result(this year or next) in a second Super Bowl for Manning.

The projections for the rest of the season after last night’s game for Manning lay out like this: 5776 yards, 71 completion percentage, 59 touchdowns, 11 interceptions, 7 fumbles(that doesn’t include lost fumbles) and a quarterback rating of 121.   That’s not bad for a guy who treats the game right, plays it great and never stops competing while serving as an on the field coach.  Peyton Manning is just rolling along during this second phase of his career.   A career in comedy awaits him after his retirement.  Watch his SNL skits and try not to laugh.

My belief is he needs another ring to put him up there with the best quarterbacks and overall players of all time.   If he keeps playing the way he is, on one foot and with an average offensive line, I think he will get that ring.   Next week, he takes on his nemesis, Brady, in a great matchup of two great AFC teams.  On the same stage as last night, Sunday Night Football, two of the greatest quarterbacks in the history of the game will duel in New England.  This will be Manning’s fiercest test because he hasn’t played historically well in New England.  However, those tumultuous years came with the Colts when he was trying to throw bullets everywhere and resembled more of a gunslinger.   He’s a different quarterback these days and that may be the difference.

How does he fare this year in his 2nd year with Denver?  Will he get that second and most coveted ring?   Well, luckily, he didn’t predict 4, 5, or 6 like Lebron James did.   We will have to wait and see but I think Peyton’s critics(and there are plenty) should take a step back first and realize how far the 37 year old Manning has come since early 2012.   Did anybody think he would make it back with a new team and be as good if not better than his legendary days with the Colts?   I never lost an ounce of faith.  The man is simply great.