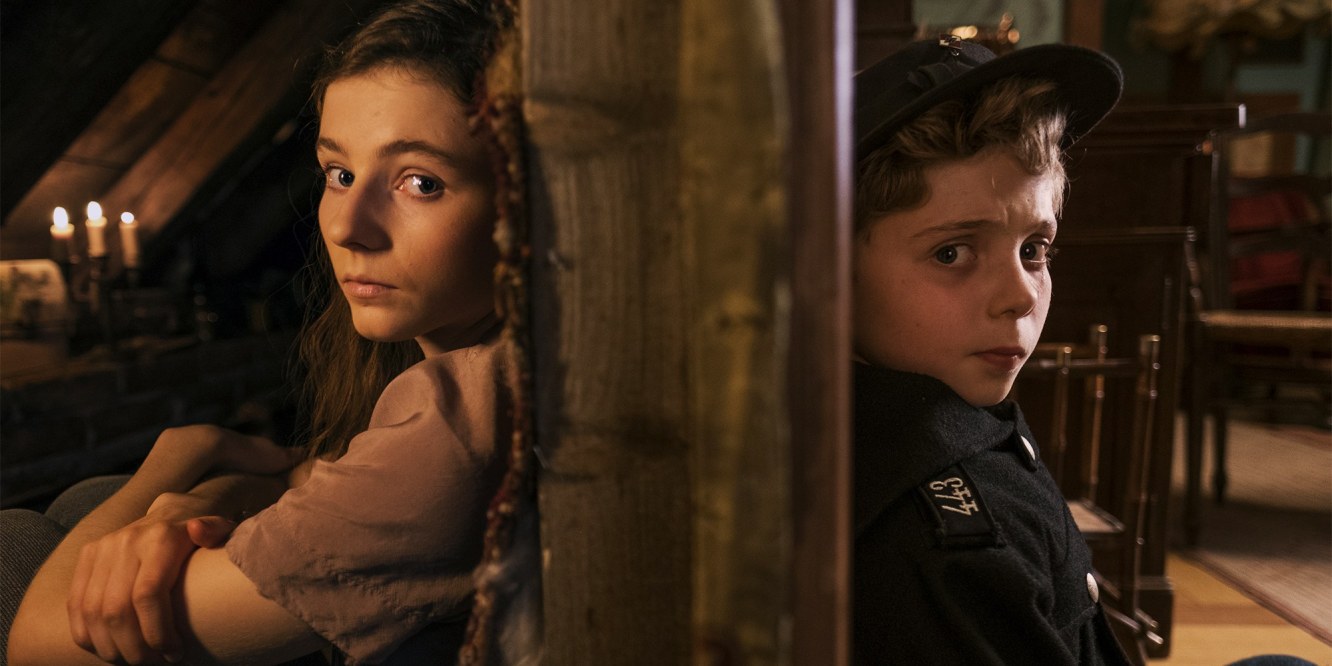 “What if” is always a fun game to play at the movies, especially when the conundrum is tied to a vital piece of authentic human history.

Quentin Tarantino did this past summer with “Once Upon a Time in … Hollywood,” where he re-imagined the night of Sharon Tate’s infamous death. This is the exact reason why the movies exist and are so magical. You can rearrange a real event with the whimsical fantasy. Thankfully, visionary director Taika Waititi retains dignity and injects heart into his latest film, “Jojo Rabbit,” which dives into the throes of World War II’s latter days in 1945.

What if your imaginary friend was Adolf Hitler (Waititi)? For a young German kid, Jojo (the indelibly earnest Roman Griffin Davis), this is his reality. He doesn’t pretend to talk to ancient dragons, dinosaurs or merely ride around on a bike. No, he’s a full-blown Hitler fanatic, his walls littered with posters, banners, and figurines. Jojo’s days consist of running around with his pal, who happens to be a merciless dictator, talking about life’s struggles as a young boy in war-torn Germany. Elsa’s mother, Rose ( Scarlett Johansson), has no idea about her son’s make-believe friend, but she has her own secret to harbor: a young Jewish girl named Elsa (Thomasin McKenzie) hiding behind the wall of her dead daughter’s room.

When Jojo finds her, all of his beliefs about his country, hero, and his life are called into question.

This movie plays with your feelings just enough while making you laugh. It’s the sincere and well-written humor in Waititi’s script (adapted from Christine Leunens’ novel) that makes the movie truly come together. You will laugh as a boisterous Hitler encourages the kid to dance around the woods, which concludes with the little man grabbing a live grenade from Captain Klenzendorf (the gifted Sam Rockwell), and nearly blow himself up. Elsa’s run-arounds with Hitler never seem to end well.

There’s lot of heartfelt juice to the story as well. You’ll love the resistant at first yet quick to thaw relationship that grows between Jojo and Elsa, because it’s a slow-building one that Waitit and Leunens don’t just thrust upon the viewer. She’s a scared yet tough young Jewish woman who has lost a piece of herself to this war, and here’s a boy who sits completely on the other side. It’s this interaction and connection that forces Jojo to confront the fact that sometimes, you shouldn’t meet your heroes.

You’ll love the sweet friendship between Jojo and his best friend, Yorki (Archie Yates). He’s not only the extremely loyal friend, but a witty one with wicked survivor instincts as well. I got a few good laughs out of a weaponized Yorki constantly running into his friend on the streets when US bombs are descending on their town. It’s the offbeat humor that isn’t forced that cuts the line between real history and fictionalized drama quite well. You’ll never get too high or low here.

Johansson gives an Oscar-worthy performance as the hardened yet free-willed Rosie. She doesn’t know where her husband is, lost her sister, and is desperately trying to hold onto a connection with her son, who shares different views than his mom. The actress is uber-talented, so much more than a tights-wearing Marvel superhero. She’s showed in before her Black Widow work, and in this film and the upcoming “Marriage Story,” gets to show off the chops that help her own multiple award nominations. Perfecting a German accent, Johansson packs Rosie with heartaching will, genuine comic wit, and injects life into a part that could have went elsewhere with a different actress.

I constantly amazed by Rockwell’s versatility. He also rocks a fine German accent, playing a hapless Captain whose tired frankly of the wear and tear of war, drinking himself into a stupor as he trains young ten-year-old boys to prepare for battle. Near the end, when the Allied Forces were closing in, German forces got desperate and installed all of their human willpower. Rockwell’s Klenzendorf is anxiously aloof, ready to check out. When he meets Jojo, something in him clicks. Only Rockwell could have this much fun playing a German military officer.

McKenzie (who broke your heart in “Leave No Trace”) and Davis are adept as the young souls trying to stay alive and protect their freedoms amid war, whether that’s getting in fights, playing games, or writing a humorous child-like art book of “Jewish history.”

My hat is off to Waititi. He instills the imaginary Hitler with the heart of a relentless mind and the soul of a stand-up comedian in on the joke. You’ll laugh out loud as he hops around Jojo’s life, giving the young man advice, especially on how to pronounce the rally cry of Germany, “Hail Hitler!” While some wouldn’t have put themselves in their own movie in such a big part, Waititi did it because he brought youthful energy to the most hated person in human history. Did you think you’d be laughing at Hitler’s jokes? No, but here we are.

Only Waititi could have made a heartfelt satire about World War II and Hitler. How many filmmakers can pull that off? It continues a reign that started with “What We Do in the Shadows,” continued with “Hunt for the Wilderpeople,” hit a high note with “Thor: Ragnarok,” and hits a pinnacle here. I think this is his best effort yet, a film that trades on history with some outlandishly bold humor and heart.

It’s not easy making a film that creates laughter and stirs up feelings in the heart. When the final scene of the movie is two people dancing in the streets to a German version of David Bowie’s “Heroes,” it’ll be hard not to smile.

Here’s the thing. “JoJo Rabbit” is something different. An original slice of cinema that nobody has touched before. With the yearly dose of war movies, it’s nice to see a more divergent entry from that genre.

You’ll laugh, cry, and cheer during this one. It’s truly the work of a visionary.