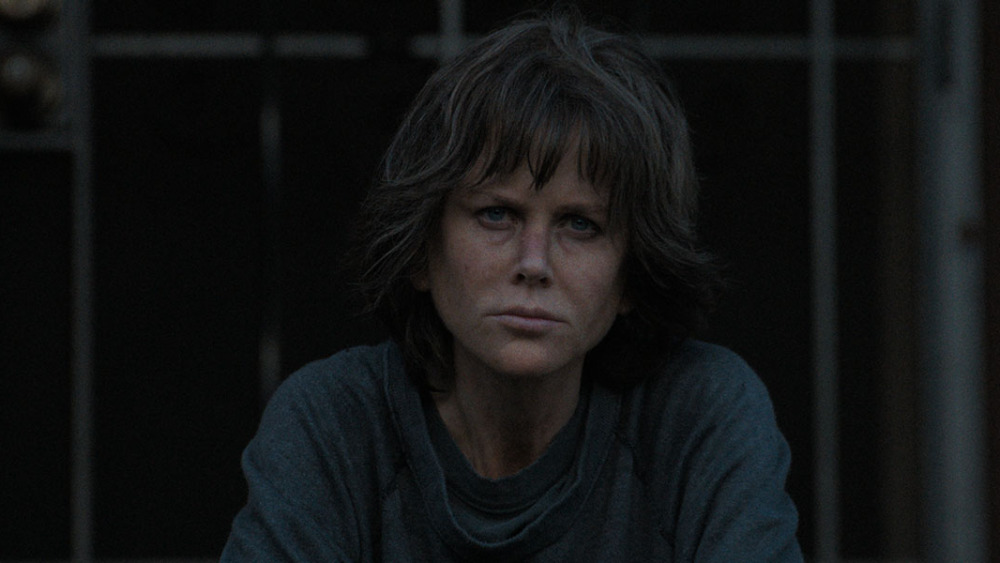 Erin Bell (Nicole Kidman) destroyed herself 17 years ago, but the real question is can she put herself back together after being shattered emotionally? More importantly, what price does one have to pay in order for her soul to be forgiven? Karyn Kusama’s searing and tremendously filmed Destroyer digs into the depths of one woman’s fight to right a wrong.

Working undercover with FBI agent Chris (Sebastian Stan), Bell infiltrated a team of bank robbers a long time ago, and things went wrong. Very wrong. The fallout from the botched mission left Bell desolated and tore apart her life. When we catch up with her in the opening scene looking over a dead body, she looks like someone sitting on the devil’s doorstep; a human being thrown into a soul-crushing washer machine and left to dry out for a month.

When the leader of the gang responsible for the tragedy, Silas (Toby Kebbel), reemerges and connects with Bell, the disgraced detective feels a need to close that case, avenge some demons, and do some good for a change. But it won’t be easy, because the only people Bell can trust are shady criminals, crooked lawyers, and a nerve-ending depleted police department. In other words, she is on her own.

It’s a good thing Bell works best when all she is given are a gun, beat up Ford, and one good outfit to lurk around Los Angeles looking for blood. To paraphrase David Ayer’s Training Day language, Erin is a wolf going after wolves, which makes her dangerous to be around yet intoxicating to watch work.

Kidman really leans into this role, going for the complete visceral effect, showing us a woman who took her own life so to speak nearly two decades ago in order to punish herself, and hasn’t found a way back to the way of the living just yet. Erin blames herself for what went wrong with the undercover job, and no one can convince her otherwise. To borrow a line from Vincent Hanna, all she has is what she’s going after and she won’t stop.

Speaking of Michael Mann, Kusama paints his favorite cinematic playground a gritty black and blue shade, matching the color of Erin’s decaying skin, which makes Mick Jagger’s leathered mug look halfway enticing. Kusama treats this intense character driven drama like a punk rock concert, blazing a dark trail all over the city of angels while introducing a few demons. It’s the mark of a true auteur, whether it’s how she slows the action sequences down to a suffocating yet thrilling roar, or lets the camera drench all over Kidman’s face.

Talk about one actress becoming a force of nature inside one season. Kidman was one of the best parts about Joel Edgerton’s Boy Erased, and Erin Bell is located on the other side of the spectrum from her sweet, caring mother of a conflicted son. Here, Bell’s daughter (Jade Pettyjohn) can’t stand to be around here, and for good reason. One look into Erin’s eyes, and you’d think fire was getting ready to come out of them.

For a little while, Kidman looked to be stuck in cruise control, career wise, but in receny years has become a true force to reckon with. Together with her work on HBO’s Big Little Lies, Kidman has found the pinnacle of her profession once again. This is Oscar worthy material, because Kidman doesn’t let the makeup or beaten-up look take over her performance. Every move, step, and word confirms who Erin Bell is, and that’s all Kidman. It’s true acting. Full immersion.

The supporting cast is meticulously cast, starting with Kebbell’s deadly foe. The British actor has a way of blending wild charisma with legit terror in his few scenes, creating someone you hate just enough for Erin to track down. Bradley Whitford gets a single scene to chew scenery, and lends the intense sequence with Kidman a level of gravitas. Known to most as the Winter Soldier named Bucky, Stan distances himself here from that role, imbuing Chris with a trustworthy heart. Scoot McNairy does credible work as Erin’s ex while Beau Knap and James Jordan soak the most juice out of smaller roles.

The real scene-stealer here is Tatiana Maslany, who takes the Kidman route in covering up her beauty with grimly despair and deadly isolation. As a member of Silas’ crew who may hold the key for Erin finding her guy, Maslany is part of the film’s best scenes, which includes a knockdown drag-out brawl with Kidman. She is known for Orphan Black and was sensational in David Gordon Green’s Stronger, but here, she reminded me of Jeremy Renner’s work in Ben Affleck’s The Town. A woman who knows there is only one way out of a nasty life, and that’s bullets and fists.

Theodore Shapiro’s score is brilliant. I’m talking the best music I have heard in a movie this year. Part rock, part searing guitars, and in other parts just a creeping sense of doom, Shapiro finds beauty in the sorrow of our heroine, and really creates a world with his music. I consider the score of a film to be like the marinade on a steak. If you get it right, the taste is tremendous. If it’s overdone, the original product is betrayed. Shapiro’s score hits a crescendo in the final 15 minutes, which are heartbreaking and triumphant all at once. They reminded me of one of Christopher Nolan’s earlier films.

Phil Hay (Kusama’s husband) and Matt Manfredi’s screenplay is superb, lacing the characters with dialogue that doesn’t sound like it was pulled from a pulpy comic book, yet strung up from a reality you may not recognize, but know is out there. The impact is blunt and gives the cast some room to play with. I like a screenplay that doesn’t aim to be smarter than the characters or material, instead just fitting into the world. The two writers have a few tricks up their sleeve to keep the viewer on edge, so be ready for that.

Kusama’s world bruises you with its dark and visceral beauty, creating a shock and awe thriller that thrives on the elevated performances of Kidman and Maslany. The filmmaker’s career has blazed a trail with tough and imperfect women dominating her worlds.  Girlfight may have launched her into the Hollywood stratosphere, but Aeon Flux and Jennifer’s Body brought her back down. Let’s consider Destroyer her fierce return to the light. When I found out she directed one of Showtime’s Billions’ best episodes, “Golden Frog Time”, I was ready to be sucked in.

Destroyer moves at its own pace, slowly revealing the past and linking it up to the present day fight. It’s methodical and direct with its intentions, a credit to a cast and crew going all in on a difficult endeavor. From the casting to the location to the sound and writing, this movie is one searing ride through hell on Earth.

It’s one of 2018’s best films that has finally expanded throughout the country, like a juicy steak arriving a little late at the table. Something you won’t see coming, but should take notice of when you get a hold of it.