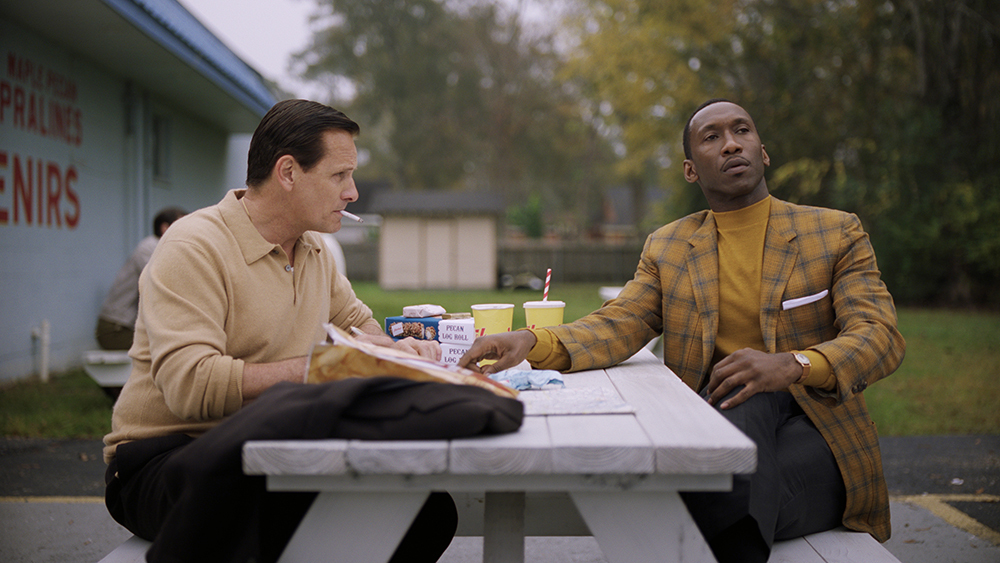 Certain films hit you just right. You sit down in your seat at the theater hoping for some kind of escape, and get a heartwarming tale about a subject that is unfortunately still ripping through the headlines. The film leans into you with all its might and leaves you with a smile in the end.

Equal parts crowd pleasing and unexpectedly hilarious, Peter Farrelly’s Green Book hits theaters at the perfect time, aiming to please while reminding people of how hard things used to be and still are. The title of the film refers to a special handbook that accompanied African Americans throughout the deep Southern parts of the United States, warning them away from certain restaurants and hotels while advising them to stay in true dumps.

The film picks up in 1962 where racism was at the height of its ugly injustice. Tony Lip (Viggo Mortensen) makes his living by being the muscle at a nightclub and the backbone for his family; smashing in faces by night and being a loving father and husband to his wife (Linda Cardellini) and kids by day. Tony has a penchant for violence, but he’s a tender soul with a full heart who just wants provide for his family. A product of the mean streets of New York, Tony is given a job to drive the world renowned pianist, Dr. Don Shirley (Academy Award winner Mahershala Ali), or as Tony calls him, “a doctor of pianos or sumthin.”

Thrown together on the road through the dangerous, most racist areas of the country in the 1960’s, Tony and Dr. Shirley are the classic odd couple: the former is an overweight punch first, think later tough guy with a reputation for keeping people safe, and the latter is a reserved introvert with a drinking problem who happens to be the greatest piano player ever. I don’t need to draw out what happens next for you to get an idea of what Farrelly is cooking up.

What you get is a story about one of the sweetest and most unconventional friendships of all time. Two men from opposite sides of the world learning each other’s worlds and how to break down the walls of color, class, and stature. Tony isn’t a racist by trade, but he’s uncomfortable in the beginning around African Americans, so Shirley helps thaw out that block of ice around his soul. In return, Tony helps the Doctor live a little. They each learn something about each other along the way.

Mortensen and Ali make this film work. You have a couple marvels here working at the top of their game. If these two acerbic performers weren’t so good at climbing into the skin of any character they took on, the film would be stuck on a lower level. Mortensen, packing on the pounds and perfecting the accent, lives and breathes a middle-aged man with a chip on his shoulder. A guy who takes care of other people’s problems, but never thinks about himself. Ali, who is starring in HBO’s upcoming third season of True Detective, is a true chameleon, and it’s required because Don Shirley has a few secrets that need to be played out in a certain fashion.

The two actors have unbelievable chemistry with each other, which makes for a ton of laughs. On a recent press tour stop, Farrelly admitted to being surprised at how much comedy came out of the film due to Mortensen and Ali playing off each other so well. A scene where Shirley helps Tony write a love letter to his wife is every bit as funny as it was in the trailer, but more so due to the trajectory the film takes in getting to that moment.

In Green Book, the unexpected humor allows the dramatic parts of the film to land harder, creating a more powerful effect. There have been countless films made about racism and its repercussions and horrors, but neither of them will make you laugh like this film will. At one point, I laughed so hard I had to lean back in my seat slowly and check my six.

When I first saw Farrelly, who is well known as one half of the brother directing duo that helmed There’s Something About Mary, directing such a vital film, I was taken aback and unsure if it could work correctly. Now that I have seen the film and know how important comedy was to this true story, he was the best choice. Whenever the events in the film get too heavy, Farrelly lightens it up without disrespecting the era and the torment that occurred. He walks a fine line and doesn’t fall once.

Is there a little too much cinematic syrup poured over the final 20 minutes? Sure, but there’s nothing wrong with a little extra sweetness in your holiday movie offering. You aren’t walking into the theater looking for something highly original and profound. Just a sweet and relaxing couple hours that may teach you something in the end, or at least make you feel good.

Green Book made me feel pretty good. The movie’s soul warmed me up on a cold night. When I left, people were laughing, cheering, and full of good vibes as the doors opened. They weren’t left confused, ripped up, or wondering what they just saw.

Thanks to a couple pros at the wheel and a helping dose of comedy from its co-writer/director, Green Book excels and fulfills all the promise that its trailer made. A crowd-pleasing delight that exceeds its modest expectations.