Here’s all the news that is fit to NOT print on KSDK News. A stream of holiday consciousness:

Thank you, Joe Wright, for delivering a fantastic Winston Churchill flick. Here is a film that throttles your history senses and informs without boring the shit out of you. Gary Oldman is unreal as the aggressive Brit who told Hitler to fuck himself and launched 300 boats to Dunkirk. I left this film feeling entertained and a bit wiser.

What would Churchill say to Luke? Grow the fuck up, your weasel.

Thank you, John Mozeliak, for trading for Marcell Ozuna. He isn’t Giancarlo (or Yelich), but he looks like an explosive player who made some adjustments and will be an upgrade over Randal Grichuk/Stephen Piscotty. I wasn’t hot about acquiring Ozuna, but after talking to Marlins reporter Craig Mish, I think he will be a great fit. And only two years, and not TEN!

Thank you, Cardinals, for sending Piscotty home to care for his mother. Sure, there may have been another landing spot that brought you greater reward, but this was a classy move.

Thank you, La Cosecha Coffee Roasters, for making the best cup of coffee in St. Louis. Head over to Manchester Road and order a pour-over. A cup made just for you and strong enough to kickstart your day. So many great flavors and not a dent in the wallet.

Thank you, Uber riders, for standing outside on the street in front of a pickup location. This way, I don’t do sixteen loops around the block and the ride gets going faster. I’m not a bald Alfred, so help a dude out.

**For those who take forever to get in the car, fuck you.

Thank you, T.J. Miller, for confirming every feeling I’ve ever had about you from the moment you opened your mouth, shithead. It’s bad to keep going once a woman says no, but quite another to punch that same woman in the face and jam a beer bottle up her ass. Yes, I believe the reports about this creepy jerk who tries too hard on the stage.

**I mean, look at this guy and tell me that doesn’t look like an organic scumbag… 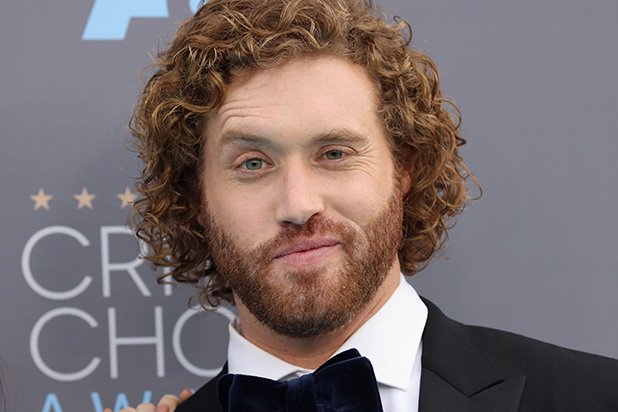 **For all the asshats who wonder why it takes these women so long to come out, ask yourself this: have you ever been sexually assaulted? If not, shut your fucking face.

Thank you, Alex Steen, for resisting the urge to score since Nov. 16. Paul “Shitbreak” Finch has a better chance right now at putting one between the pipes than you do. Hard work, good hockey sense, and going to dirty corners doesn’t make up for a $5.8 million salary. Do something, dude.

**He isn’t a savior by any means, but Pat Maroon would help this team. He scores, hits, and rocks a fine beard. Cheap too. Pick up the phone, Doug.

Thank you, Stan Kroenke, for taking the Rams out west, and then telling the team they could win games. The Rams will lock up the NFC West soon, which is insane since they could barely win games two years ago. It wasn’t all Jeff Fisher. The owner told this team to tank so the move could get rolling. Fuck you, Stan. I hope a serious ballsack rash is in your near future.

*P.S. The rotation is as sure of a thing as a wet fart after two cups of chili. Waino is declining, Wacha is an injury nightmare, Mikolas hasn’t pitched in MLB in years, and Weaver is untested. Get another arm.

Thank you, Cardinals fans, for being vulnerable home-schooled children again. Stanton chose the Yankees! Can you blame him? He’ll play in NY and then opt out and go to the Dodgers. He said yes to pinstripes. Have another piece of cake, Cardinal Nation.

Thank you, Liam O’Donnell, for casting Frank Grillo as a detective who fights aliens in order to save the world. Beyond Skyline is 90’s action junkie gold. Intended for an easy going audience who aren’t film snobs with a foreign language tinged asshole. So much fun watching my boy be unleashed to kick some ass.

**No One says FUCK quite like Frank. No one.

Thank you, Etsy, for making a bracelet that reads “fuck cancer.” I’m proud to wear this thing. Cancer is a bastard and took my good friend, Troy. It takes many on a daily basis, and will hopefully die a terrible death itself one day. I have faith. Cancer is like the Death Star/First Order holding off constant rebellions. One of these days, the docs will get it right.

Thank you, Donald Trump, for being an absolute joke of a President. Proof that the Republican party is insane. Proof that the Democrats couldn’t draft a better candidate than Bitch Hilary. Proof that anybody with money can make it to the top. You won’t last two years.

Thank you, Columbia and Sony Pictures, for creating another Jumanji film. Another remake or reboot that didn’t need to be made. Sure, Robin Williams took his own life in order to quench the pain of slowly losing yourself to a rough form of dementia. But that doesn’t mean tarnish one of his most enjoyable kids films. What’s next? Birdcage? Dead Poets Society? Good Morning, Vietnam? Mrs. Doubtfire? Get a creative bone in your body, fucksticks.

Thank you, Dose of St. Louis listeners, for the solid feedback on the show. It’s a LOT better doing one show a week instead of five, and I’m able to make a few shackles off of it. You could listen to something else or tell me I suck (both are acceptable practices), but you’ve tuned in. Love getting midweek messages about something on the show. I promise to deliver better content EVERY week. Keep listening.

Thank you for reading this bullshit. See you next time on the unfiltered back roads of Princeton Heights.