“Business is war. It’s dog eat dog and rat eat rat. If you are drowning, I’ll come over and stick a hose in your mouth.”-The Founder

The American Dream means something different for everyone. For Mick and Mac McDonald, the dream was simple; opening a popular way to deliver fast food with quality and efficiency. They did that in San Bernardino, California after a few failed endeavors. For Ray Kroc, a struggling salesman: the dream was to find something truly revolutionary, grasp it, and never let go.

When these three men met, the world and the fast food industry changed forever. The Founder is an entertaining, if light and tone deaf, ride for cinema audiences to endure. Director John Lee Hancock doesn’t aim for the Oscars here with his routine retelling of a bittersweet tale, but that doesn’t mean it is worth skipping. The film works for a few good reasons.

First, Michael Keaton is the perfect guy to embody Kroc. From the moment we see Kroc riding halfway around the United States trying to sell milk shake mixers, you feel for the guy. He gets rejected in every which way but loose, and is burning the candle at both ends when a certain establishment orders a set of mixers. It’s McDonalds, and upon seeing their remarkable service behind the counters of their restaurant, Kroc is blown away and instantly hooked. After a dry spell that lasted too many years, Keaton is on top of his game lately, but isn’t overdoing it. He nabbed Oscar nominations for Birdman and Spotlight, and delivers a signature performance here as a desperate man who is willing to go to desperate measures to win. At first, you care for Keaton and even when you don’t near the end, he commands your attention. 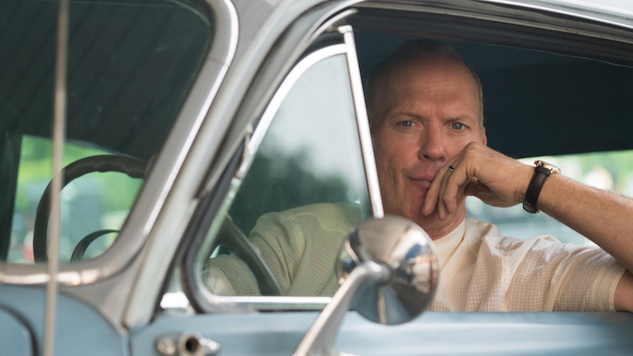 Second, Nick Offerman and John Carroll Lynch are great as the brothers and this is important. Offerman is the stern younger brother who knows that Kroc is up to no good, but can’t persuade his more loving brother Mac from drinking the salesman kool aid. These parts are important because if you get a couple less actors to fill these shoes, Keaton towers over them and the film is uneven. You needed strong actors to match the lead blow for blow. Offerman and Keaton can mix comedy into a dramatic scene with the ease of a pro, and that helps the film stay away from feeling heavy.

Third, the film moves at a good pace. At just shy of two hours, you never feel like the film is bogging down or losing steam. For a film without any action or big thrilling moments, that is impressive.

Fourth, the history lesson aspect never enters preachy territory. I didn’t know about the rigged and unfortunate details of how this fast food super chain came to be, and Hancock and screenwriter Robert D. Siegel keep things simple here. No one wants to be preached to. At times, the twists are too smooth, but it doesn’t take away from the overall motive of the film.

I never believe any “based on true story” film to be 100 percent true. It’s just not possible with an artform, but what the gentlemen achieve here is a delicious satirical look at the harsh world of business. The tone of the film feels odd at times because of the shift in the liking of Keaton’s Kroc. He’s an opportunistic salesman at first trying to land a big account, but after a little while he’s revealed as just another shark. The Founder is hard to shove into one genre, because it’s shifty, like its main character.

Should you see this film? Yes. Keaton is marvelous, and Offerman and Lynch are great as the brothers who wish they had never ordered eight milk shake mixers from a swindling salesman. Once Kroc got his hooks in, it was over. Seeing it all unfold over a fast paced film is entertaining, and that is what the movies are supposed to be. Entertaining, at times informative and possible diverting, pieces of work that hopefully make you feel something near the end, or alert you that something needs to be felt more.

You’ll feel bad for the McDonalds brothers, but get a kick out of watching Keaton work his magic.

The Founder isn’t perfect, and doesn’t demand Oscars, but like its box office competition Hidden Figures, it offers a wise history lesson with extra spice.