Desmond Doss(Andrew Garfield) didn’t want to be a hero, but his upbringing and religious beliefs put him on a path of life preservation. The first conscientious objector to win the Medal of Honor, Doss earned that prestigious honor by saving 75 lives during one of the most deadly battles in World War II. 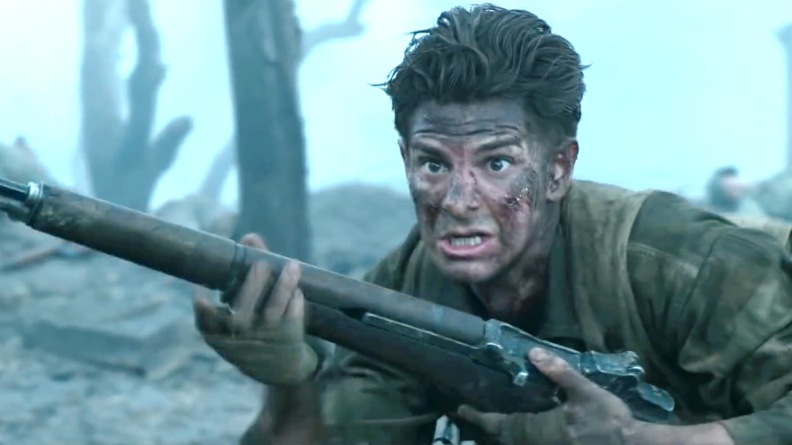 In a way, Gibson and Doss needed each other. They also needed an actor like Garfield to bring this legendary character to life. The trio hit a home run together.

Gibson hasn’t graced mainstream movie theater screens much lately. Outside of the Sylvester Stallone fun bag mash-up sequel Expendables 3, Gibson hasn’t been able to break through and there’s a reason everybody knows. Right or wrong, the tale of World War II hero Doss will bring the talented yet controversial actor back into the light and for good reason. Hacksaw Ridge is one of the best movies of 2016 and reminded me of Steven Spielberg’s Saving Private Ryan.

Doss’ tale wasn’t an easy one to tell, and more than likely the reason for the long walk to the cinema. The battle atop the infamous ridge in Okinawa isn’t fertile ground for most filmmakers. You either go there or you don’t go there. All in or nothing. There is no middle ground with World War II flicks. The carnage and brutality of war during those battles wasn’t as prevalent as the unique heroics that the conscientious objector fought inside himself.

Doss’ religious beliefs kept him from using a weapon, but they didn’t save him from a rough childhood. The son of an alcoholic World War I veteran(Hugo Weaving) who did his best to steer his kids away from enlisting, Doss didn’t feel right sitting at home while others around him fought and either died or were badly injured. Before he heads off, Doss met and fell in love with Dorothy(Teresa Palmer), and this woman gives him extra purpose to serve his country and come home.

A bulk of the first hour is spent with Doss in boot camp, where his beliefs are less than well received by his fighting peers. Soldiers like Smitty(Luke Bracey, almost making us forget the Point Break remake) misjudge his stance as cowardice instead of religious stubbornness. Sergeant Howell(Vince Vaughn, sliding nicely back into drama) and Captain Glover(Sam Worthington) don’t know what to do with him.

After initial hesitation, Doss and company are sent off to war and that is where Gibson’s skills as a director are on full display. After using a subtle approach in establishing Doss’ upbringing and purpose, the director switches to full throttle action mode in the battle scenes. When the soldiers climb the ill fated rope to the top of the ridge, the shock and horror is reminiscent of Spielberg’s Normandy Beach rush. Bullets flying through heads, explosions cutting bodies in half, and the hysteria and sudden blast of war will sear your eyes in stretches. It is the only way to properly tell Doss’ story.

He ran into this madness without a weapon to protect him and if ever was a movie for the times, it’s Hacksaw Ridge. In a modern world full of unnecessary violence and despair, Gibson shows you a guy who decided to do things the hard way yet saved more lives than anybody with a gun ever could. The powerful aspects of this film won’t leave you alone.

Gibson, torn apart for his obscene religious rant, may acquit himself by placing a heroic character who did these good deeds because he was driven by his own religion and its values. Something tells me the filmmaker gravitated towards this tale for a reason. As I noted earlier, the story and the film needed each other.

Garfield is the real deal here. The 33 year old actor has dazzled filmgoers in Social Network, Never Let Me Go, and the recent 99 Homes but Doss brings out the best in his abilities. Playing Peter Parker in The Amazing Spider Man films helps him command the screen for two plus hours, and shows what kind of chops this young man has in store as he ages gracefully on the big screen. It took the right amount of heart, charisma, restraint, and bravado to bring Desmond T. Doss to the big screen, and Garfield is brilliant here. Without him, Gibson’s film is blind deer in the woods.

Hacksaw Ridge isn’t pretty and it doesn’t play nice. It will knock you down and horrify you at times. The sights and sounds probably won’t leave your mind for quite some time. What Gibson and Garfield do is show you what true courage looks like in the face of insurmountable odds.