Two years and change ago, Saul “Canelo” Alvarez succumbed for the only time in his career, to Floyd Mayweather Jr. While his handlers asked him to wait before taking on the best pound for pound boxer in the sport, Canelo didn’t hesitate and lost in honorable fashion. He ate what seemed like 20,000 Floyd jabs and could never break into the vault that Mayweather built over 15 years in the ring. 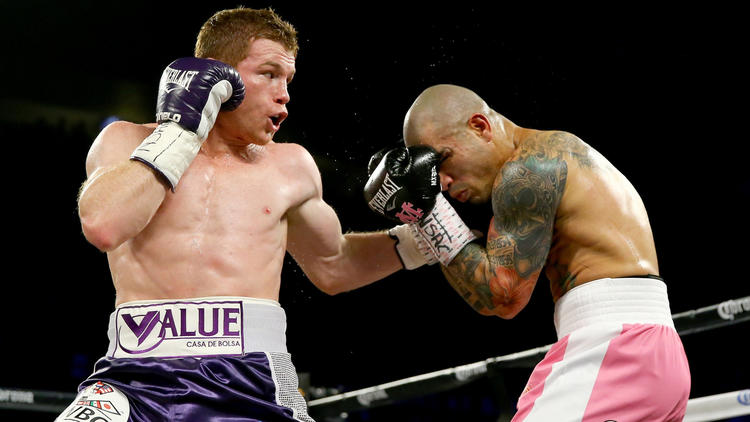 Saturday night in Las Vegas, Canelo turned the tables and used the exact same strategy on Miguel Cotto. He had become the teacher in the ring. The wiser one. Cotto only landed 129 of over 629 punches, assaulting the thin air more than anything. Canelo was nearly perfect, winning the fight easily and taking the middleweight belt from his challenger.

Say hello to Canelo, boxing fans. This is a name you will want to remember for the next 5-10 years. And at last, it won’t be for his distinct look of red hair, pale skin and freckles. It will be for his dominance in a boxing ring.

The 25 year old took the final step into legitimacy Saturday night when he took down Cotto. For 12 rounds, Canelo frustrated the attacking Cotto and didn’t let the older fighter land his signature hook. It was like a dog chasing a car that never stopped moving yet Canelo didn’t have to run. He threw and landed a punch, pivoted, moved his head and set up his next assault. It marked Canelo’s final test in transitioning from a puncher to a boxer.

Alvarez tagged Cotto at will throughout the fight. He would slip his jab and punish Cotto’s body, like a hammer swinging down at the kidneys. When Cotto got risky and peered in towards Canelo, he was tagged with another jab and Canelo would unleash the hook to the body. There was nothing Cotto could do but take the punishment or risk getting dropped. Nobody got knocked down Saturday night, but Cotto’s career hit the canvas and Canelo’s rose to the rafters.

As 2015 ends, boxing is shifting away from Mayweather Jr. and towards fighters like Canelo and Russian sensation Gennady Golovkin. The future may represent the adventures of true action fighters. Boxers like Canelo and Golovkin prefer action rather than speed racing in a ring. They don’t fire a punch and run away. They fire multiple shots, step forward and throw more. Whenever people tell me boxing is dead, I tell them about Canelo and Gennady. With atom bombs for fists and a will that matches a moving tornado, these two guys will set up what could be the blockbuster fight of 2016.

In May, Gennady Golovkin and Canelo could very well meet and decide who gets to be the new face of the sport. It doesn’t matter who is the pound for pound champ. It doesn’t matter who has the most wins. It matters whose name comes into fight fans minds when the word boxing is uttered within their earshot. Between them, Canelo and Golovkin have 66 knockouts in 82 fights. For people that beg for action in the ring, look no further than these two.

Cotto won’t retire from the sport but his days as a championship contender have been fractured. He enjoyed a late career renaissance under Freddie Roach, but had no idea how to connect with anything sinister on Saturday against Canelo. A great warrior took his final pay per view bow on Saturday. Another is just getting warmed up.

It’s not about his Mexican background and legion of fans. It’s not about his look. It’s about his ability to cut down any style of fighter in the ring with him. Canelo Alvarez has arrived and isn’t moving anytime soon. No longer a novelty, he is an action packed delight that boxing fans, hardcore and casual minded, should know and appreciate today.