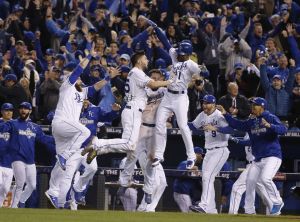 The Kansas City Royals and New York Mets wasted no time in raising the dramatics of a World Series face off and it started before a pitch was thrown.

10. Edinson Volquez, the Game 1 starter, may or may not have found out before first pitch that his father passed away at the age of 63. Talk about the emotions. The kid is at the high point of a World Series start, something every kid dreams of and he experiences the lowest point a kid can face with losing a parent. Volquez would pitch six solid innings, allowing 3 runs on 6 hits before exiting to grieve and deal with an unthinkable loss.

9. Baseball players with softball bodies can be efficient. Bartolo Colon may look like a pitcher you saw at Forest Park in a softball game but he can still pitch. He threw 2.1 innings before finally surrendering the winning run.

7. Who could have guessed Chris Young would be the winning pitcher for KC in Game 1? The Game 4 starter threw three innings with only 53 pitches thrown, shutting the Mets bats down and giving the Royals a chance to win it. Improbable doesn’t even describe it.

6. Jeurys Familia, the untouchable Mets closer, gets torched by Alex Gordon in the 9th inning for one of the longest home runs of the postseason. Right when the super powered pitching of the Mets appeared to be too much for Kansas City, they struck down their most lethal threat. The 8th place hitting Gordon did the job. Improbable.

5. Eric Hosmer goes from goat to hero in one night. After making a crucial error at first base, he hits the sacrifice fly in the 14th to win it. He does that on the same night that David Freese four years earlier went from goat to hero. Freese dropped a popup in Game 6 only to go on and make history. Hosmer didn’t shine as bright but collected his dignity.

4. Ben Zobrist, the player many Cardinals fans wanted, had another great game with 3 hits and an RBI. The durable Phillips screwdriver type tool player is hitting .500 this postseason with an OPS of 1.404.

3. Matt Harvey was good if not great in a start many thought would go to Noah Syndergaard or Jacob deGrom. The Dark Knight arm who many thought may not even pitch this October continued a solid postseason. Remember when he was the only Mets pitching ace?

2. The Royals truly starved off a rough start to the series. With a loss, they would be staring down the barrel at Thor and deGrom and be in bad shape. Now, they have the upper hand and another game at home to stage an upset.

1. Is it just me or if Hosmer’s sac fly travels a little less into right field, Curtis Granderson had a shot at nailing Alcides Escobar at home? His throw didn’t miss Escobar by too much last night and he threw it on a fly. Impressive.

This series will only get better. Sure, the Cards are out but there is still plenty of good baseball to watch this week. There’s the opportunity for the ring to come back to Missouri. There is the chance for the Mets to clinb back into the limelight and win a World Series for the first time in 29 years. For the Royals, it would be the first time in 30 years, as 99 percent of Redbird fans know well.

What part of Game 1 did you find the most interesting?