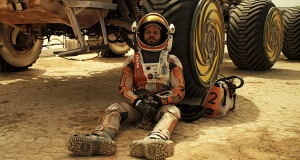 The premise of The Martian is Matt Damon trying to survive on Mars but in reality, Mars couldn’t survive without Damon. He breathes fresh air into the survival genre and adds a new ingredient and it’s called humor and the signature placing of it in this movie.

Together with director Ridley Scott, Damon helps enliven Andy Weir’s groundbreaking novel about an astronaut stranded on the one planet you don’t want to get lost on. A place where nothing grows, lives or wants to exist. 50 million miles away, Damon’s Mark Watney has to somehow survive for years before a rescue mission can even be prepped. Like Castaway, the viewer will immediately put themselves in Watney’s shoes. Being one of the best botanists on the planet and Macgyver when it comes to figuring out thermodynamics, electronics and physics, can Watney survive? The movie isn’t unpredictable yet keeps you on your toes.

The greatest tool Scott and Damon swing here is using Weir’s wonderful slices of comedy and fish out of water theatrics to keep the proceedings light. There are parts of the novel that were left out due to the book being extremely detailed and thick, so I don’t blame the filmmakers for cutting corners here and there. No one wants to see a 20 minute exposition where Watney explains how he turned his own feces into usable soil to grow food and how he hooked this thing to that thing. It’s science, big budgets, big actors, directors and you gotta move! A three and a half hour film about a guy surviving on Mars isn’t going to work. This two hour and 22 minute cut is kinetic, quick on its feet and doesn’t slow down. Out of all the things left out, the humor and strangeness of Watney’s situation isn’t forgotten. It’s one of the best parts of the movie.

The goods also exist in seeing Watney figuring things out on the move and running into constant trouble. This is a geek experiment that even someone who hated chemistry and physics in high school found enthralling. Watney takes the viewer on all kinds of rides and you won’t forget it because it’s Matt Damon doing it.

For this role, Scott needed a special breed of actor. One who can engage and captivate at the same time and keep an audience hooked during one long expanded science experiment. Damon is perfect for the job because he wears the role like a spacesuit he has been fitted for. Nothing rings false or doesn’t seem right because of the actor. From the moment we see Damon wake up alone on Mars after the mission goes bad, we are connected to his every move. It’s his show and he dominates. This isn’t the kind of part someone else could have slipped into and tried to be good. This is full throttle transformation. Damon goes through a physical change as well and doesn’t skip a beat. He never forgets to keep things light and but shows the ability to instantly switch to a powerful moment.

The film hinges on Damon and his ability to transcend pages to the screen. He’s a marvel here, carrying the film on his shoulders and functioning as a balancing stick between wide eyed action and unexpected humor. This isn’t the first time people have went looking for Damon(Saving Private Ryan and Interstellar) but this is the first time the mission has actually involved some comedy and not just a pack of tissues. If it got too heavy, The Martian loses half its value.

The supporting cast is an elite group. All the roles fit the players like a glove. Jeff Daniels, Chiwetel Ejiofor, and Kristen Wiig especially fit their parts to a tee. Jessica Chastain, Kate Mara, Sebastian Stan, Michael Pena and Donald Glover are also great. No one overplays the roles or underplays the script. Everyone is right where they need to be.

The soundtrack is full of fun hippy disco music(that will be explained in the movie). The running time feels like 45 minutes less due to the superb editing. Harry Gregson-Williams’ score doesn’t overpower or seem distant. It adjusts to the action at hand and is seamless. The technical achievements are superb, with the space action sequences packing a punch and the desolate pieces on Mars(aka Jordan) streaming well without being distracting.

Is this an Oscar caliber film? Yes. It fits the criteria of taking a best selling novel and bringing it to vivid life. Instead of being gloom bin like Gravity, this film combines different genres and is a feel good ride. The Martian is an original piece of work, bringing a fresh coat of paint to a genre that people have forgotten about or didn’t think could find coherence away from Earth. Damon is Oscar worthy because a good portion of the film is him talking to a webcam and dealing with the hardships of a chaotic planet. And no, he doesn’t have a volleyball or Tom Hanks to talk to. It’s all Damon and it’s a special kind of performance.

The Martian is a special kind of film. Powerful, funny and easy to connect with and be engaged by. A geeky feel good thrill ride that will leave you talking about it afterwards. It may force you to see it again. It is the first film in 2015 that truly made me leave the theater thinking, “Wow, I could watch that again right now.”