Don’t think. Just sit and be entertained by NBC’s The Player. It’s a guilty pleasure. An action adventure built to thrill and not boggle viewers down with complexity. There are some juice in these dice if you care to watch and be sucked in every Thursday night. Here are the five things we learned from Episode 2, “Ante Up”. 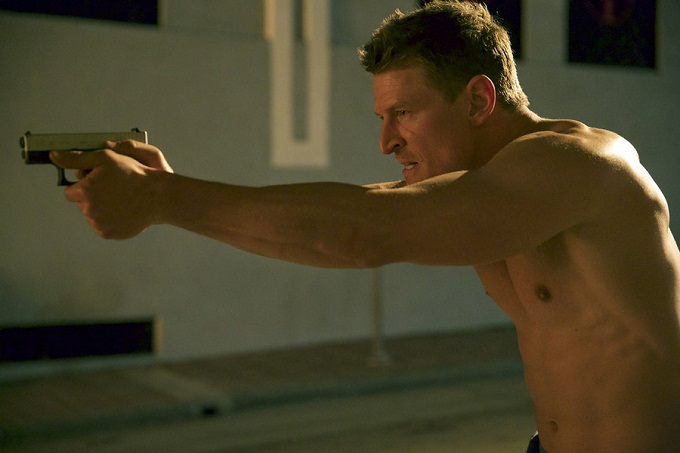 *Philip Winchester is a bona fide action star built for the 1980’s but doing fine here. Every time I see him swing into action as Alex Kane, the man of mystery thrust into a different “game” every week, I see a shade of Dolph Lundgren mixed with a young Kurt Russell. He’s got the goods, and he showed it on Cinemax’s Strikeback. Here is an actor who won’t win an Emmy award but will make action junkies like myself feel a wave of nostalgia for the old action heroes. The men who said little and punched harder. Winchester makes this show go. Built like a brick house and carrying more charm than needed and an edge, he does more than enough here.

*Point Break tributes are still legal, right? This week, Alex was matched against an old war buddy and opened up a chase that started on the strip and ended in the desert.  In particular, a scene where Winchester’s Kane jumps out of an airplane sans parachute after his guy. If that doesn’t get you feeling the firepower goosebumps, I am not sure what will.

*The lingering question of whether Kane’s wife Jenny is dead is a boiling pot, and something that Wesley Snipes’ Mr. Johnson will help Kane track down and solve. The minute she was shot in the pilot, I smelt something cooking that wasn’t ready to eat yet and could add a layer of intrigue to an otherwise procedural type series. Jenny is alive and Alex and his handler will solve it.

*You can’t trust anyone on the show and that will continue week to week. Something about Johnson’s assistant and tech savvy pretty lady Cassandra makes me think she has a few dirty skeletons in her closet. Her relationship with Jenny, her quick to trigger handle nudge in her home and her overall ability to control the game. Keep some eyes on her.

*Snipes offers a few coats of paint on Johnson and that’s fine. While his face and name are plastered all over the hype of this show, Snipes is a supporting character and it’s a good thing. He gets his one little quick fight exchange and that’s enough to propel Alex’s story. That doesn’t mean the audience doesn’t want to know how deep Johnson’s connections go and how his past steered him to Vegas.  Keep an eye on him as well.

Winchester muscle. Snipes flavor. Dangerous ladies. Easy to digest plots with above average network action. This NBC cheeseburger is tasting more well done with each hour. “Ante up” was better than the pilot. Let’s hope hour three just keeps getting better and better.

I’m in for more Player. Are you?