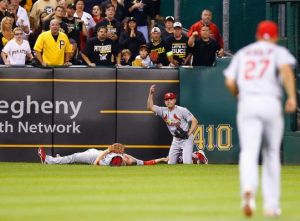 As a general rule of thumb, sports fans shouldn’t take anything for granted when it comes to their teams making the playoffs, but the Cardinals make it hard to be civil in that area. For the fifth straight season, the Birds on the Bat will enter the playoffs. Second only to the New York Yankees in playoff wins since 2000, the Cards begin another round of October action as a top dog, the only team with 100 wins.  The hunt for a 12th championship begins on October 9th so what do you do until then? Talk about playoff rosters and look back on the season that got us to this moment. I’ll save roster talk for Sunday or Monday. Now I want to look back on what just happened…in the last six months. Ready or not, here I come.

*Mike Matheny solidified himself as Manager of the Year. I don’t care about narratives, storybooks or whatever jargon his critics will drudge up. Matheny’s work this year was tremendous. Not only did he win, but he did so in the most improbable manner possible. Yes, he plays his guys like Jon Jay too often and weighs too hard on his closer Trevor Rosenthal, but the job that Matheny did under the circumstances is more than admirable. It needs to be teachable. With his training room full of veteran limbs seeking care and the Memphis roster being emptied on the big league club, Matheny pulled the right triggers in directing his team towards a triple digit win season. If wins aren’t the standard that a manager should be weighed by, I am not sure what system you are running. If it’s the trust a player feels in his leader, Matheny led in that category back in 2012. In his 4th season, Matheny had to dig deep, do a lot of patchwork and find a way. He did.

*Injuries. In other words, the medical attention this team needed and how it didn’t seem to affect the box score. 2015 will be marked by the blows this team took and its ability to keep moving forward. I’ve overused the Rocky analogy but it just fits this Redbird team. They lost their ace pitcher in Adam Wainwright three weeks into the season, lost their starting first baseman, starting left fielder, starting centerfielder, and parts of their bullpen and just kept moving forward. How do you define resiliency in baseball? The ability to collects results no matter what gets thrown in your direction. This is no fairy tale. This was a boxing match and the Cards won by a landslide on points. They slipped the jab, moved around the ring and kept their feet moving for the entire fight before dropping the hammer in Pittsburgh on Wednesday.

*The year that Jaime Garcia finished a season healthy. He didn’t get going until late May and missed a few starts in June with a muscle pull, but Garcia endured and pitched the best ball of his career. The 20 starts mark the most he has put together since 2012, but look at the difference in performance. In 2012, his WHIP was 1.36. In 2015, it was barely above 1.00. In 2012, he was worth 0.6 Wins above replacement. In 2015, he was worth 3.9 WAR to the Cards. An ERA that was 3.92 in 2012 shrunk to 2.43 this season. The new Garcia brandished a healthy shoulder as well as a more efficient pitcher on the mound. The last time the lefthander entered the playoffs, he was hiding a bum shoulder that would self destruct in the series against the Washington Nationals. This fall, he enters as arguably the Cards nastiest pitcher. A weapon instead of a liability.

*John Lackey turns back the clock and redefines home cooking. Lackey put on a show from early June through the rest of the season, but his work at Busch Stadium was unreal. Posting a 1.93 ERA at home in 17 starts, Lackey gave the Cards league best rotation a little extra grit and pitched above his preseason expectations.

*Carlos Martinez goes from “5 inning emotionally unhinged guy” to arguable ace inside six months. Martinez stepped up in more ways than one in 2015, becoming one of the team’s most steady arms and enjoying a stretch of 11 games of consecutive quality starts. He won 14 games, struck out 184, and pitched 179.1 innings. His season was cut short, but he proved that he belongs near the top of this rotation and not as a #5 guy. If he keeps getting better, Martinez is going to be a handful for years to come.

*Matt Carpenter puts together another quiet MVP type year. The man exploded out of the gate in April and May only to severely stumble in June and July. Where Carp goes, the offense goes with him. When he returned to the leadoff spot on July, Carpenter collected four hits(2 home runs) and reminded people that sometimes conventional wisdom doesn’t apply to athletes. While it would be easy to assume he could hit anywhere in the lineup, Carpenter does prefer the leadoff spot and the stats backed it up. In the second half, Carpenter has hit 19 home runs and slugged .592. An on base specialist for his life, Carpenter has hit 28 home runs and smoked 44 doubles in 2015. He’s scored 101 runs and drawn 81 walks to go with the eye opening strikeout total of 151. With a bigger stick comes a higher probability to miss, so I’ll take the K’s with the extra power. On a team that struggled to exhibit power, Carpenter has supplied the most from the leadoff position. After a midseason swoon, he found his stoke in a big way.

*Jason Heyward answers the bell and fulfills the promise. He came to the team nearly a year ago in the wake of Oscar Taveras’ passing, and was ridiculed in April when he started off with a chill in his bat. From May 1st, Heyward has been steady at the plate and a renegade in the field. Heading towards another gold glove and owning 9 assists(all that seemed to be game changing plays) in right field, Heyward leads the team in overall WAR and versatility. He may always let the HR/RBI baseball card mafia down, but when it comes to all around game and the ability to change it, Heyward fulfilled the promise of the winter preview. The team would be smart to sign him.

*Yadier Molina works wonders behind the plate again. Sure, his bat may not exhibit the power Yadier displayed in the past, but he still drove in 61 runs and handled this MLB best pitching staff. When it comes to catchers and WAR, the measurements aren’t fair or detailed enough to truly show how important Molina is to this team. So you look at catcher’s ERA, which is the average the pitcher has when Molina is behind the plate. Molina led the National League with a 2.79 CERA and caught 41 percent of potential base stealers. With all the injuries and newcomers to this staff and balancing it all, Molina showed once again why he is so valuable.

*The rookies make a dent. Randal Grichuk could have been an easy rookie of the year candidate if he doesn’t get injured. His 47 extra base hits still rank among the leaders in rookie hitters. Stephen Piscotty joined the team in late July and has done nothing but hit since he arrived. The sacrifice fly against Atlanta in July. The 2 run double off the Cubs in early September. Piscotty and Grichuk combined for a highly impressive season that gave the Cards a much needed boost. Tommy Pham finally made an impact in the second half and has put himself in roster contention. The next man up method is so memorable due to guys like Piscotty, Grichuk and Pham.

There are others. Trevor Rosenthal had a great season, slashing 20 points off his WHIP while saving 48 games. Kevin Siegrist turned into a dynamic setup man and a workhorse. Kolten Wong’s sophomore season had its up and downs but he still has 43 extra base hits. Matt Holliday’s power numbers were down in an injury shortened season but his OBP is still potent. Lance Lynn suffered a few bumps in the road down the stretch but still gave the Cards another durable solid season. Jhonny Peralta’s production didn’t dip much from 2014, even though his second half wasn’t the best.

In a season that seemed more rockier than the record actually showed due to injuries, the Cardinals showed why they are so tough and will be for years. They react instead of panic.  They didn’t make a big midseason trade or enjoy a smooth ride this season. They didn’t have a 30 HR/100 RBI guy or two. They couldn’t hit at times. They made a lot of games close and painful. They emptied their Memphis roster. In the end, they won 100 games. While the Mets and Blue Jays had to trade their way to an improved roster, the Cards relied on their internal methods like they always do and come into the playoffs stronger than ever.

While fans shouldn’t expect this to happen every year, it’s hard to not think of October baseball without the Cardinals coming in as favorites. It’s as likely as Pumpkin Spice Latte’s brewing at Starbucks and leaves growing on trees.

Relax. Leave your nails alone. Save your stress and anxiety for next weekend when the real games start. The hunt for the World Series. The quest for 11 wins begins on October 9th. Are you ready? The Cardinals are and this month should be another memorable run.